Earlier this month dance aficionados from across town and beyond went online for a mammoth 16 hour session of sounds; a party of plenty to mark UltraVegas’ quarter century. A very welcome ‘covid safe’ chance for people to let their hair down.

Marc Carter, the man behind MK’s finest clubbing name, reminisced and looked to the future with Sammy Jones…

Apparently, UltraVegas was ‘designed for the spontaneous souls, the impulsive individuals, and the covert characters amongst us,’ and what a lot of us there seemed to be.

From the moment it launched out of the wonderful Winter Gardens complex in 1996 it delivered dance delight on a grand scale.

The man who has been steering the good ship of sounds since the start remembers there was a real buzz even before the first tune had spun on the decks.

“All of Milton Keynes was talking about UltraVegas, so we had a good feeling and certainly hoped it would be something special,” said Marc, “After the first few weeks we realised it was going to exceed any of our expectations when people from far and wide, including Europe, starting travelling to us to attend our parties.”

The queues were almost as big as the tunes UV played too; with keen clubbers regularly snaking their way out of the building waiting their turn to step inside and party hard with their peers. It was quite a sight.

The line-ups were legendary and highlights are many, but Marc had a special affection for The Winter Gardens full complex parties, which were some of the best to be found anywhere in the UK at the time.

“We had huge legends like Pete Tong, Paul Oakenfold, Boy George and Paul Van Dyk playing the hallowed decks of UltraVegas – can you believe that?

“And Chicane played live to celebrate our fifth birthday – and that same weekend they were celebrating being Number One in the national chart with Don’t Give Up – it was just off the scale. A great booking, and great timing too.”

That show might have been a time-smart booking, but the continuing roll call of dance royalty who could be found at the decks week after week was most certainly no fluke – it was born out of hard work: “It was about persistence and knowing who to call, and a lot of networking,” Marc says, “I had brands before UltraVegas so I had been booking big names for a few years before, and had built up a good relationship with the artists and agents – the challenge was to get them at the right price that would work for the particular event. 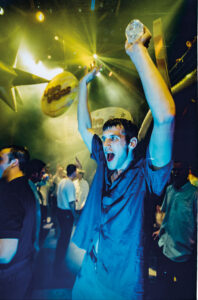 “In my opinion, the headliners kept coming back because they were treated very well and looked after impeccably… and because of our crowd – they really were one of the best in the country!”

Marc – who was joined by Gary Smart and Richard Long at the start of the venture (“Richard came up with the name – I think he saw it in a magazine advert and the rest is history”) – is thrilled by the fondness still maintained for the brand: “It brought happiness and euphoria and I get so many messages from people reminiscing about the amazing times they had with friends – and with their now husband or wife!

“It’s very emotional when people tell you things like that. It makes me proud to know that what we put together all those years ago affected so many people in such a positive way.”

So that’s a little glance over the shoulder of the Vegas that was, but of course earlier this month, the brand was back with a monstrous Saturday night (and Sunday morning) for all the faithful.

The pandemic was a little bit more than a fly in the ointment; and could so easily have scuppered plans for a great big party to celebrate the 25th anniversary – but not to be beaten, Marc hatched the plan for a live stream instead.

“I have been asked so many times over the last 10 years, ‘when will you have a party?’ It all stems from the resurgence of classic house music and the 40-year-old clubbing fraternity wanting to get out and party hard. After two years of searching and finding the right venue, I had organised an event for the August Bank Holiday in 2020 and was just about to push the button when COVID-19 came into our lives. Now I have to wait to host that event when the time is right. But the 25th anniversary was a huge milestone and meant so much to so many – that’s why we pressed on with the online stream; to celebrate the date and party hard with our house music family almost 25 years to the day since we first opened the doors to The Winter Gardens for the launch.

Those mixing things up for the birthday celebrations included Ashley Cooper, David Ball, Ashley Kellett, Glenn Woods and Jason Jay, with UltraVegas favourites Seb Fontaine and Jon Pleased Wimmin also taking part along with many other great names from around the UK.

“I want to thank every single staff member who worked at UltraVegas over the years, without them it just wouldn’t have succeeded,” Marc said, “That includes the wonderful door teams, front of house ‘meeters and greeters’, the bar staff, talented production and décor teams through to the glass collectors and cleaners – they were all a huge part of the success and it was wonderful to have so many of them tune in to the birthday event.

“And a massive thanks to the UltraVegas dancers, percussionists, resident DJs, world-class guest headline DJs and the UV MK massive party people who made it what it was.”

“It was truly amazing to see so many people interacting on the Twitch feed and engaging with the DJ’s and each other – that is why I wanted to do this, for people to get together and talk, reminisce, laugh and connect with people again… that’s what it was all about for me.”

It’s fair to say that we find it a little more difficult to party quite like we did a couple of decades ago; long nights followed by early morning starts are trickier to engage with these days. Or at least they were, before Covid forced us to stay home.

How about you, Marc?

“I still love to go out and party, and love to lose myself on the dance floor, forgetting that anybody else is there,” he says with a laugh, “I can still do an all-nighter like the birthday bash, it just takes me a lot longer to recover and I need at least a week of rest before I do it again!”

“I’ve always loved Milton Keynes, but UltraVegas was the best of all. It launched at the height of 90s dance culture and I was lucky enough to play at the first ever one in the small club at the top. I’m proud to have been on the journey with the UV boys, all the way until they took over the whole Winter Gardens for one of the best parties I have ever done. It’s good to be part of something so iconic and special.”             Seb Fontaine

“Part of the excitement of going to UltraVegas in the old days was the journey there. When you are not used to the grid system of Milton Keynes it was like being in a giant computer game trying to navigate to the venue. Upon arrival you entered a fabulous carefree cathedral of fun. It’s so easy to forget just how brilliant UK nightlife was in the 90s… We all took it for granted, thinking it would last forever. It’s great to have this opportunity to bring back some of those feel good vibes at this anniversary of such an outstanding club.”                       Jon Pleased Wimmin