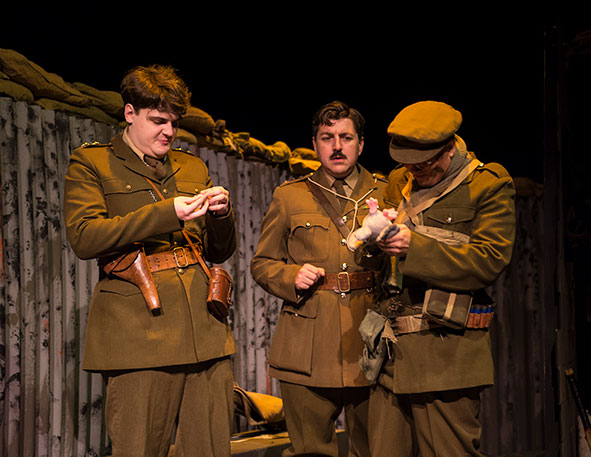 The Milton Keynes Theatre of Comedy (MKTOC) returns Stantonbury Theatre to the trenches of World War 1 for the second and final time this September. Watch as Captain Edmund Blackadder prepares for the final push in the final 3 stories of this iconic comedy.

Private Plane:  Despite Blackadder’s loathing of the arrogant flying ace Lord Flashheart, Blackadder, Baldrick and George volunteer to join the Royal Flying Corps unaware that their nickname the “Twenty Minuters” refers to their average life expectancy. After Blackadder and Baldrick crash their plane behind enemy lines, they are captured by the Germans and must prepare for a fate worse than death…

General Hospital:  A game of “I Spy” goes terribly wrong when a bomb strikes Blackadder’s bunker and injures George, leaving him in the care of the kindly Nurse Mary at the field hospital. After Melchett and Darling inform Blackadder that there is a German spy in the hospital giving away their battle plans, Blackadder and Darling are sent undercover.

Goodbyeee: Millions have died but the troops have advanced no further than “an asthmatic ant with some heavy shopping”. Now, at last, the ‘final’ big push looms, and Blackadder is willing to try anything to avoid it. Will putting a pair of underpants on his head and shoving two pencils up his nose get Blackadder invalided back to Blighty?

This production follows MKTOC’s much loved earlier plays of the first three episodes of Blackadder Goes Forth in 2017 and the The Vicar of Dibley earlier this year.

All can be purchased on-line from