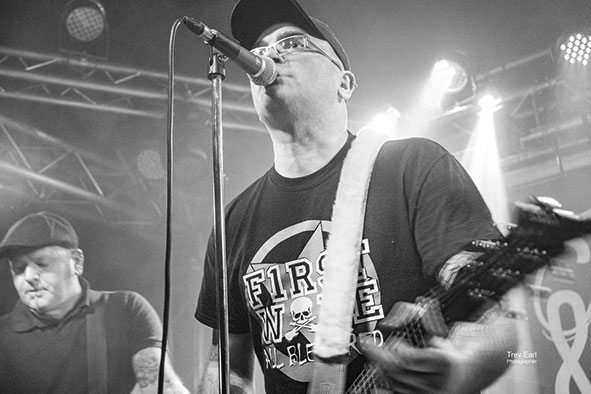 They say you never know what is around the corner, and that you should live each day to the fullest, don’t they?

Jonathan Ellams won’t disagree with that sentiment; 2020 was terrible for us all, but that he is able to answer questions for Pulse Magazine right now is miraculous.

Last July, Jonny suffered a cerebellar stroke to the right of the vertical artery. It affected his left side, killing off the brain cells responsible for controlling balance. Dizziness became a very real issue, he was left with a stutter and had to learn how to walk again.

His recovery has staggered doctors.

“… I was told by a nurse that most people don’t survive blood pressure as high as mine. Apparently I am a walking miracle!” he told Pulse’s Sammy Jones.

“I’m gradually getting better and should make a complete recovery, or very close to that.”

The guitarist and frontman with Jonny & the Mental Breakdowns did have warning signs – he just didn’t realise what they were: “I’d been ignoring headaches in the back of my head,” he remembered.

“My wife Sarah and her mother deserve a lot of credit for my recovery, and it has been a long road. I thought I was nearly back to normal, but then in September I suffered a mental breakdown because of the brain injury.

“It has been a massive eye opener and I am a lot more positive than before,” Jon admits, “My bassist Simon J Turner sorted a GoFundMe page to raise cash for some recording equipment and other stuff to help my recovery.”

That gesture proved to be incredibly important during Jon’s convalescence, allowing him to fill much of his recuperation time learning how to demo his own songs – it gave him a purpose, gave the brain new skills to master, and allowed his mind to reconnect with one of his biggest passions.

“I spent a lot of time listening to bands when I was ill,” he remembered, “And as soon as I could pick up a guitar again, I did.

“I love listening to new stuff and I listened to some old classics, anything from Springsteen to SNFU.”

Jon has a penchant for punk rock, and his bandmates surprised him with a wonderful ‘Get Well Soon’ video message with lots of familiar faces: “It included messages from Ken Casey from the Dropkick Murphys, Charlie Harper from the UK Subs, and members of Adolescents, Death by Stereo and Peter and the Test Tube Babies.”

When he wasn’t busy replaying that incredible message, Jon was putting pen to paper and recording his lyricisms.

Their current single Turn Up The Stereo is one of them.

“It’s a song of hope,” Jon explains, “Pretty much everyone has been affected by the pandemic; those who have lost loved ones and friends, businesses, and of course our amazing music scene has struggled; the bands, sound engineers, backstage staff, everyone involved – from the punters to the bar staff. The song itself is meant to be an uplifting tune that brings hope to people that we can turn up the music again and get on with what we love best.”

The release comes with added sax and trumpets, thanks to the brothers Pape from Karl Phillips & The Rejects, and Scott Bickers, normally found behind the drum kit for the Breakdowns commands on lead guitar.

“I’m very excited about the future,” Jon says, “It has been a hell of a year, so this single, writing the album and now starting to rehearse again has been the perfect therapy. Even though I won’t be playing guitar, I can’t wait to get back to gigging and see everyone who helped my family and I over the last year.”

The aforementioned album is set for release later in 2021, and has quite the title too. Poignant? Humorous? A blending of both, perhaps; It’s called One Stroke Not Out.

Meanwhile, Jon has wise words for those of you thinking of ignoring those little health niggles or the feeling that something ‘isn’t quite right.’

“Always make sure you get checked out if you feel something is up,” is his message, “Don’t ignore things until it’s too late. I know I’m lucky to be alive…”

Check in with the Breakdowns:
Bandcamp: jonnythementalbreakdowns.bandcamp.com

The Craufurd presents a load of Bull!

At the start of the year we talked to Solstice founder Andy Glass about the prog-rock stalwarts’ latest album Sia.

Now – finally – fans can look forward to enjoying the beautiful release in the live, when the sextet plays for the home crowd in Wolverton.

“It was an incredible buzz recording the new album with this line up,” Andy told Pulse, “Then we actually got to rehearse together thanks to The Craufurd and, man, that was another level of joy!

“Now, finally we get to play a string of festivals over the summer before coming back to The Craufurd on September 4 and the gig this has all been leading to. It’s home for us and so many others… the home of rock ‘n’ roll.”

It’ll be a family affair too. Music runs in the Glass family, and Andy’s son Alfie is bringing his band Torus to open up the event.

For fans of the hard and heavy, Torus gives more than a passing glance to the stoner side. Make sure to get inside nice and early and catch the ‘ones to watch.’

> Back when thrash metal ruled the stage, Milton Keynes music fans – including us – were spoiled rotten. Having The Pitz on our doorstep ensured a constant stream of artists to devour.

Shows by Acid Reign were among the finest; it was guaranteed to be full of riffs, raucous behaviour and rowdy punters. Decades on, those shows are remembered as being something special. They weren’t good times, they were truly great times.

The band called it quits at the start of the nineties, but ‘rebooted’ in 2015 with a new line-up and released their third album proper in 2019. A fourth is slated for release in 2022.

If you are still feeling obnoxious, the band returns to town on Friday, September 10. We’ll be ready for ‘em!

“It’s been 30 years since we last played Milton Keynes, so this is going to be extra special,” frontman H said, “The shows back in the day were always something special and one of them is even on our YouTube channel from 1990. Truly great times.”

Alt-rock risers Bull released their debut album, Discover Effortless Living at the end of March, which delivered 13 cuts of class.

Band members share a love of indie-rockers Pavement and you can hear that seeping through on some of the songs.
It’s an album abundant with perfect produce of varying styles, all picked for freshness…which is a bit odd, seeing as how some of the material is nigh on a decade old; the songs were written between 2012 and 2020.

Even stranger is that Elton John is a bit of a fan.

“The (album) title is taken from the opening lyric to the final track, Disco Living,” explains guitarist and vocalist Tom, “I first saw the words written on the side of a mansion being built and thought it was funny. It also ties in with ideas around class, new beginnings, a golden era of prosperity, and hoping to have life ‘in the bag.’”

It’s time to grab the Bull by its music and go have a play – the quartet arrives at the venue on Sunday, September 19.

Just time to mention that when The Lottery Winners play on Wednesday, September 22 they’ll be supported by Northampton’s Sarpa Salpa who have one leg in the alternative aisle and the other planted firmly in the pop. It’s a nice mix with plenty of hooks.

While you are here…

> Togtaster does what it says on the tin – gives ticket holders the chance to enjoy three acts who will be on the bill when Togfest returns in 2022.

The Sky Lounge at MK Gallery is the venue for the event on September 25, with Paul Mclure, Fozz and Togmor entertaining you under the ‘Reasons to be Cheerful – Part One’ banner.

Tickets are £15. Visit togfest.org for yours and to be kept up to speed on next year’s event.

> Our Man in the Bronze Age have issued a magnificent video for their equally blinding new single Midnight Lovers.

Stop by facebook.com/ourmaninthebronzeage for a peek.