centre:mk, Milton Keynes’ iconic shopping centre, will be transformed into a 500-seater sporting arena next Wednesday (8 Feb) for an evening of live badminton entertainment – but not as you know it – featuring Team GB stars, Olympians and international talent.

And fans can expect all the party atmosphere of last week’s MK50 celebrations as the AJ Bell National Badminton League reaches a thrilling season finale with the top two teams going head-to-head in a ‘winner takes all shoot-out’ to be champions.

The Championship Final gets under way at 7.30pm on a specially laid court in Middleton Hall, serving up 150 minutes of great value, top class sporting action from first point to last.

But who will play for the Championship trophy next Wednesday is still up for grabs with the race to make Milton Keynes going down to this Monday’s last round of fixtures.

Five teams – Suffolk Saxons, Loughborough Lightning, Team Derby, Birmingham Lions and University of Nottingham – are still in the running. Finalists will be known on Monday night and will include big names from GB Badminton and Europe.

Since its first ever fixture at centre:mk three years ago, the gamechanging AJ Bell NBL – the UK’s first ever professional team badminton league – has caught the hearts and imagination of fans and families across the county.

Its pink ‘double points’ Powerplay shuttlecocks, sudden death tie-breaks, music between points  and quickfire scoring have become much talked about.

Now families and sports fans in Milton Keynes can experience it live for themselves at the showpiece final.

Team GB star and Birmingham Lions’ Heather Oliver said; “The final will be a fantastic experience. It has been for the past two seasons and this year, with it being at centre:mk, what can be better?

A bit of shopping then some top class badminton. That sounds like my perfect day.” 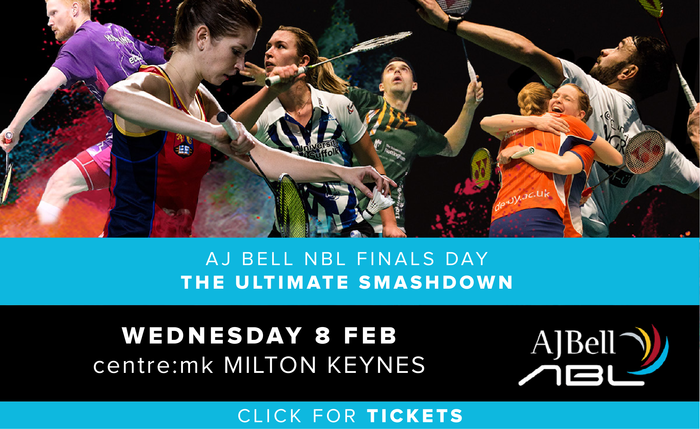 Tickets start from just £10 – and we have teamed up with the event to offer you an extra 15% off adult tickets when you book online, using promo code CMK15