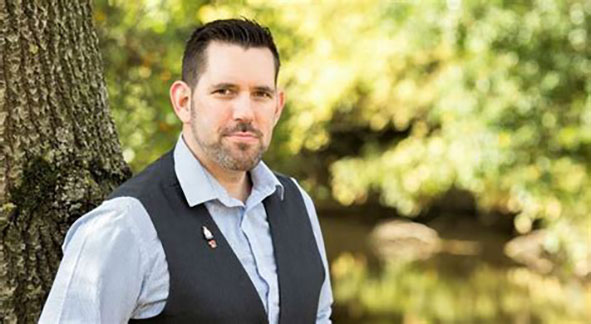 A Towcester based Afghanistan war veteran raising funds for the mental health charity he set up will be completing his 385-mile cycle ride at Delapré Abbey this Saturday (25th September) – with supporters encouraged to cheer him on and celebrate his fundraising and cycling success.

Nick Wilson, who set up the mental health initiative Talk Mental Health after suffering from PTSD and a subsequent suicide attempt, was in the British Army for 15 years. His charity, Talk Mental Health, provides support, guidance and training to not just men, but also their partners, family and loved ones.

The 44-year-old army veteran started his gruelling 385-mile bike journey during Men’s Health Awareness Week in June and will be crossing the finishing line at Delapré Abbey at around 12noon on Saturday.

“I chose 385 miles for a reason,” explained Nick. “This number represents the 385 men who, on average, take their own lives in the UK every month. My spine disorder is degenerative.  Every day I am in intense pain but I try to focus on ability rather than disability.  Despite everything I want to show others with physical and mental health challenges that it is possible to thrive in life, rather than merely survive.”

Nick chose Delapré Abbey as his fundraising ride’s finish line because of the Abbey’s alignment with his own values – a deep rooted commitment to wellbeing.

Richard Clinton, Chief Executive of Delapré Abbey Preservation Trust, said: “The Abbey is a community asset and a space for everyone and we are immensely proud that Nick has chosen to complete his mammoth cycle ride in our grounds. We share Nick’s commitment to wellbeing and hope the communities of Northamptonshire will join us on the finish line, to cheer and celebrate Nick’s incredible determination, courage and commitment.”

Nick served in Afghanistan, Iraq, Kosovo and Northern Ireland and was diagnosed with Post Traumatic Stress Disorder having witnessed horrific war scenes over an army career of 14 years.

Describing his fundraising cycle ride, Nick said: “It has been a serious challenge and one fraught with danger and unknowns, but that has been the whole point. I’m still finding my way back to better mental health.  I want to make it clear that it is possible and that physical health and mental health are in many ways part of the same equation.”

The former soldier is critical of current mental health provision saying that too many people are taking their lives while on waiting lists for therapy.  He is passionate about inspiring, educating and empowering both individuals and organisations to better understand mental health, which he successfully achieves through his local social enterprise, Talk Mental Health.

To support Nick in his challenge and make a donation to Talk Mental Health, please visit https://givepenny.com/talkmentalhealthuk_385challenge.