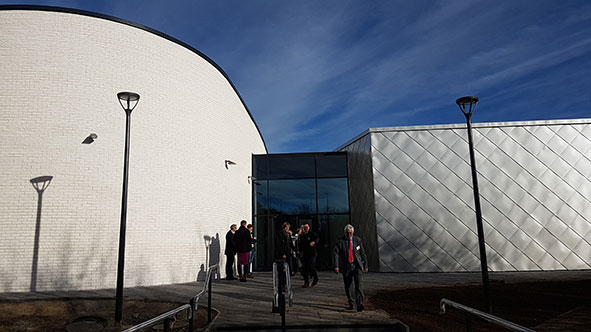 The grant from AIM Biffa Award is part of its History Makers scheme – funding museums to create new exhibitions that will inspire the public through the lives and achievements of extraordinary historical figures who have made a significant impact shaping the world we live in today.

While the exhibition will highlight the vision, leadership and innovative thinking that led to the creation of Britain’s biggest and boldest experiment in new town planning, Jock was a genuine history maker in many spheres.

Explained Museum Director Bill Griffiths: “Early in his career he took control of his family’s sugar estates in Guyana and committed to making good his family’s success, which had been built on the slave trade. He was driven by the conviction that profit alone should not be the guiding principle of society, providing employees with homes, education, training, leisure facilities and decent working conditions.

“His influential career continued as Chairman of the Commonwealth Sugar Exporters Association; Chairman of the New Statesman and Nation; setting up the Booker Prize; and as the first chair of the Runnymede Trust, the independent race equality think tank.”

At a point when colleagues were retiring, Jock leapt at the challenge of leading Milton Keynes’ development.

Said Bill: “He was a superb leader, able to recognise the right talent to get the job done. He was driven by a belief in the need to build a city that was flexible and equitable – and as a result not only changed the lives of all who came here but influenced succeeding generations to emulate the best of Milton Keynes for their own populations.

“We are absolutely delighted that AIM Biffa Award agrees with us that Jock’s life and contribution is worth celebrating, and grateful to them for this generous grant.”

The fully interactive exhibition will feature in the New Milton Keynes Gallery as part of the Museum’s current expansion – and, the Museum hopes, inspire many hundreds more contributions to its People’s Story area of the gallery.

The History Makers programme is a partnership between the Association of Independent Museums (AIM) and Biffa Award, a multi-million pound fund that helps to build communities and transform lives through awarding grants to communities and environmental projects across the UK.

Gillian French, Head of Grants said: “At Biffa Award we are proud to support such an exciting project. The new exhibition not only celebrates Milton Keynes’ history but also creates fantastic opportunities for learning and community engagement.”