A departure from the norm of car reviews this month, and a quick history lesson to start.

You see those things that run parallel to the majority of carriageways in Milton Keynes, they’re called Redways. It was the grand plan to make MK a hub of cycling, a little bit of Holland in the heart of the United Kingdom, ideal for leisure and a way for people to travel to work without the use of the car.

Fast forward to 2020 and Milton Keynes is invariably the ‘town of the car’. Anywhere you can think of is 10 minutes away by car, even travelling from one side of the town to the other; but walking, even on Redways is just that bit too far, cycling cuts that time in less than half, but seldom few actually cycle. 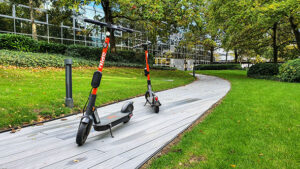 Childs Way and numerous other roads become backed up in traffic from one roundabout to the next at both the morning and evening rush hour. You can gaze over to the side of the road at any time and rarely see a cyclist making use of the impeccably well-kept interconnected routes around our town.

Well, there could be a saviour that would make use of Redways, e-scooters.

When it comes to transport the car isn’t always the best means, especially for ‘last mile’ or ‘last leg’ situations. Sadly, due to our archaic laws, we aren’t allowed to use e-scooters on pavements, cycle paths, nor public footpaths. This is due to the Highways Act 1835 (yes, really) which bans ‘mechanically propelled vehicles’ from the places mentioned above.

There’s a way around that though, and these are the current trials that are happening around the UK. You can legally ride a rental scooter in these areas, sadly, personal ownership is still illegal – for now.

Milton Keynes is the only place in the country to have three companies’ trial e-scooters; Lime, Ginger and Spin; and Spin were purchased by Ford in 2018 for a cool $100 million. If car manufacturers are seeing that the future is ‘transport’ not just ‘the car’, then there must be something in it.

I recently took to the pavements and redways around MK on one of their scooters to see how easy the whole process is. 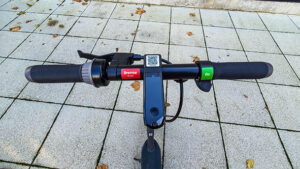 Safety is a high priority from the start, so you must be 18, and you have to upload a photo of your driving licence before you’re even allowed to rent one. You can only ride where Spin let you, the scooters are virtually fenced in via GPS, if you stray outside of that area the motor cuts and you have to walk or push it back to the allowed zone.

Speeds are capped at 15 MPH, which some say is too fast – yawn. On my last two mountain bike rides, I managed to hit 20 and 21 MPH on redways without even knowing. If I hit you at that speed on a bike, I’m going to do far more damage than an e-scooter travelling at 15.

When you park them, you must upload a photo to Spin before the ride ends. So, they can’t just be abandoned in the middle of paths etc.

Not all of the rental companies have the same strict measures mind.

For short hops around the town centre, a quick adventure into Campbell Park or maybe to Willen Lake for a run; instead of taking the car, the rental scooters are a superb idea. If used for short amounts of time, they’re also pretty cheap.

But the real change will happen when e-scooters are legalised for private use. The time, fuel and money that could be saved by individuals in Milton Keynes would be huge. Instead of needing a second car, you could likely opt for an e-scooter.

Granted in the wet it wouldn’t be much fun, so take the car on those days; but due to the amount of ground you can cover on them, even a 10/15 minute journey in the winter wouldn’t be so bad if well wrapped up.

If anything, this year has taught us all how costly having a car sitting idle really is.

I’m incredibly hopeful that it won’t be long before personal ownership is legalised here in the UK as it is in much of Europe. Milton Keynes, unlike older towns such as Northampton, is ready-made for personal electric transport like this, and anything that gets cars and buses off our roads is undoubtedly a good thing?