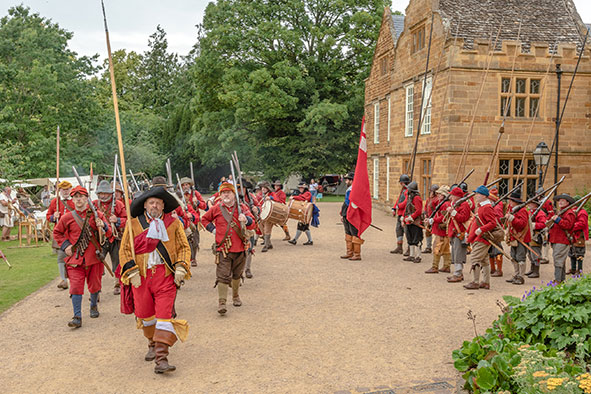 Step back in time for an exciting weekend of displays, demonstrations and hands-on history, complete with cavalry and cannons.

On Saturday 21st and Sunday 22nd August, The Not So Civil War takes place inside the historic Abbey and grounds from 11am until 4pm. The site will come alive with spectacular fun for all the family as Northampton’s turbulent past is re-enacted before your eyes.

It’s the dawn of war and the Parliamentarians have assembled at Delapré Abbey. Visitors can watch a full historic drill display on the South Lawn complete with cavalry and cannons, learn all about the military tactics of the 17th century, and see what civilian life was like. Surgeons, cooks, gravediggers, midwives, gardeners will go about their day-to-day activities so that you can discover how they cook, create, and cut off limbs!

Eleanor Sier, Delapré Abbey Preservation Trust’s Head of Engagement and Interpretation said “We’re looking forward to welcoming everyone to this exciting event. It’s great that we’re able to commemorate this moment in our history and I can’t wait for everyone to join in the fun. ”

Spencer Houghton, Colonel Nicholas Devereux’s Regiment, said “Colonel Nicholas Devereux’s are delighted to have the opportunity of telling the story of Northampton’s vital role at the beginnings of “The Not So Civil War” where the Parliamentarian forces rallied ahead of the first major battle at Edgehill just two days march south west near Banbury on the Northamptonshire/Oxfordshire border.”

Delapré Abbey has close links to the English Civil War as the home of Zouch Tate, the MP for Northampton, who inherited Delapré in 1617. He was closely involved in the upheavals that led to the beheading of King Charles I in 1649.

Leading the fun is renowned re-enactment group, The Devereux’s Regiment, which has a passion for bringing the past to the present. The regiment was established in the early 1970s and has members from all over the UK helping to bring historic buildings to life.

Covid measures will be in place throughout the event. The safety of visitors, volunteers and staff is a key priority to the Abbey team and they are proud to be part of Visit Britain’s Good to Go scheme, which means you can visit safe in the knowledge that they adhere to government and industry COVID-19 guidelines.

This event forms part of the Abbey’s programme of summer fun for families with the house open Sundays to Thursdays throughout August, a sports themed outdoor trail, and a classic car show in September. Visitors can also enjoy Bottomless Brunch and Afternoon Tea in the Orangery café, and award-winning fine dining at Hibiscus.

The Abbey team is committed to giving back to the community and earlier this year announced that they we be gifting an Annual Pass to more than 7,500 local families which will enable them to explore inside the house for free. This scheme launched in May and anyone living in an eligible postcode can register by visiting delapreabbey.org/local.