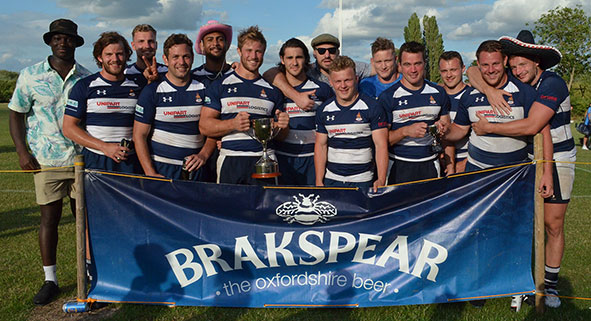 The 2017 rugby sevens event at Olney turned out to be an absolute classic of a day in terms of both the quality of the rugby and the off field socialising.

Helped by dry, but cooler weather than earlier in the week, the conditions were conducive to a display of excellent 7s rugby. Throughout the day first rate rugby was on display.

The Brakspear Men’s Open was won by Coventry Rugby Club who had had a close encounter with the Racing Club Academy on their way to the final. Coventry tore apart Ilkley, the 2016 winners, in the first half with three quick tries in succession. The Yorkshire side made a valiant come back in the second half to bring the score back to 26-38. Ilkley had previously seen off the Milton Keynes 7s winners, Apache Braves, in the semi-final.

The Ladies Open final was won by Old Northamptonians who eventually won comfortably against a young BBBs 7s side, turning out 29-7 winners.

The Stimpson Eves social tournament saw the Birmingham and Solihull Bees 2 side take on the local side Hammerhead Sharks to win the shield, with Paggers Pirates winning the President’s Plate.

Will Maisey was made the Brakspear player of the tournament having taken a controlling hand in all of Coventry’s last three wins.

Olney 7s 2017 proved once again to be an outstanding rugby day out for all involved. Testament to the off field social side was rugby folk, from all over the country, partying well into the night and the large stack of over 40 barrels waiting to be collected the next day.

Take a look at Jeff Bowden’s photos of the day.

Thank you to all of our sponsors, organisers, referees, and volunteers who helped to make the day another roaring success. See you in 2018!