These days you order via your smartphone or computer, press for home delivery and your goods will be picked, packed and delivered, or be waiting for you to click and collect if you’d rather. 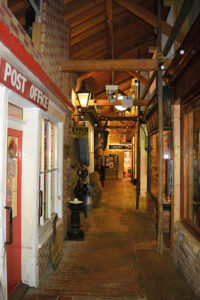 But shopping in the past was a much more simple affair; long before the era of the supermarket, the High Street was a place to stock up on all your groceries and enjoy a natter, writes Sammy Jones.

At Milton Keynes Museum, you can step back in time as you learn more about how we used to shop; stroll along our cobbled street and enjoy the sights and sounds of a butcher’s, Post Office, cinema, pub, hardware store, grocer and department store.

What sets our street apart though, is its authenticity; the store facades, and in many cases the interiors, have come from local shops that once served our community.

Those old enough will remember some of our preserved shop fronts, while youngsters delight in this authentic visit to the olde-worldly.

As you enter the street you might hear the faint clinking of glasses, the hum of background music and the chatter of patrons who would have finished a day of hard work with a swift beverage (or a few) at The Angel Public House in Stony Stratford.

The watering-hole once stood at 11-15 High Street, before being demolished in the early 1970s to make way for the building of Cofferidge Close.

Actually, over the years there have been several Angel Inn’s in the town – the first mention can be dated as far back as 1677. But our one survived the longest. It is shown on a street plan for the town dating back to 1806, eventually shutting up shop in 1967. After six years standing empty the building was demolished, and we took ownership of the entrance doorway and surround while the area was redeveloped.

Cox and Robinson is a chemist name still associated with the town, but we have many of the contents from their earlier store which were gifted to us when the former High Street shop moved to its current location on Market Square.

Cox and Robinson was a partnership between Charles Cox and his nephew William Robinson, who had previously worked as Charles’ assistant.

Our Haberdasher is filled with items that were staples in all homes long before clothing became a disposable commodity. ‘Make do and mend’ was the way of past days, and buttons, threads and zips would have spilled from the drawers and pots in the shop. Repairing items, rather than binning them at the first sight of a fray was better for the environment too.

The store front? That came from Mrs Barlow’s Wallpaper Shop in Stony Stratford. Bryan Egan – one of our longest serving volunteers that many visitors will have met in the parlour, is married to Mrs Barlow’s daughter Pam.

Benford’s Butchers was once the place for all your meaty requirements. It could be found on Bletchley’s Simpson Road and even ‘boasted’ a small slaughterhouse to the rear of the shop which was used for many years. Today, the flesh ‘on sale’ in our display looks very realistic, but we can confirm that no animals were killed to make our pies and pork chops!

A little further along the street, eyes are drawn to the facade that belonged to the Newport Pagnell Co-op. Its solid green door handles were used many a time by this writer; as summer holidays began fading and the return to school loomed, all the local children would visit for their school uniform essentials – although I maintain those unflattering stretchy blue shorts we were all forced to wear should never have been compulsory school uniform!

You would get your feet measured for new shoes while sitting in a clearing among the rails of rather bland looking clothing lines, and the room always seemed rather dark – which was a welcome relief from those blisteringly hot and sunny afternoons that always seemed to accompany a visit.

Co-op members had their own ‘dividend numbers’, and once a year would visit the store to collect their cash dividends for monies spent. Store club cards and loyalty schemes are far from a new enticement to stick with a brand. Saving the shopfront was a challenge as the Museum was allowed about two hours while the demolition team had their lunch!

Our ironmongers frontage originally belonged to Eady’s butchers and appears in the directories dating from 1877.

John Eady opened in Church Street in Wolverton, and the business had been continued through possibly four generations before the Agora development led to its closure. When open, the meat had a cloakroom ticket attached and this allowed shoppers to pay at a desk in the corner. Eady’s pay-desk had been a ticket desk at the second Wolverton Station and can now be viewed in the Museum’s Hall of Transport.

As well as from Odell’s, contents of the ironmongers came from Olney business Sowman’s, which was founded before 1822, and later expanded – occupying two more premises in the town.

Later, everything from sporting guns to gramophones and tea and coffee services were also provided.

These days, if you are in need of medical attention, an ambulance is dispatched. But roll back the clocks to the turn of the 20th century, and if you were feeling of a fragile disposition, a hand ambulance would have been sent to collect you!

The Bischoffsheim ambulance was widely used by the police, with nearly 400 of them in operation by 1909. Our example is part of the collection housed by Newport Pagnell Police Museum. It had been bought in 1903 by public subscription in memory of Dr Melville Hailey, who had practiced at The Elms in Newport Pagnell.

The ambulances were eventually withdrawn from use in 1938.

And staying with the medical side of things, how are you with a trip to the dentist? If you wince at the thought of a visit, do spare a thought for those who had to engage with the dentistry of old – a peek into our dentist room will make you shudder, for sure!

If you had a need to get a tricky toothy-peg treated during the 1930s, Ernest Copeland would have been the one making the extractions. Back then, he had premises in Newport Pagnell High Street, and Bletchley Road in Bletchley.

In those days, it was quite usual for surgeries to be operational in private houses, with a much less clinical look than those we visit today. Luckily, pain relief has improved since those times too!

As you peek through the windows of the many stores, or step inside for closer inspection, you will find shelves brimming with all manner of goods; some still widely used today, and others firmly relegated to the history books.

And we haven’t even mentioned the cinema, or the glass hearse that used to transport local people to their final resting place…

You’ll be able to experience the magic of the Street of Shops, and all that the museum has to offer when we reopen to the public on May 19, 2021.