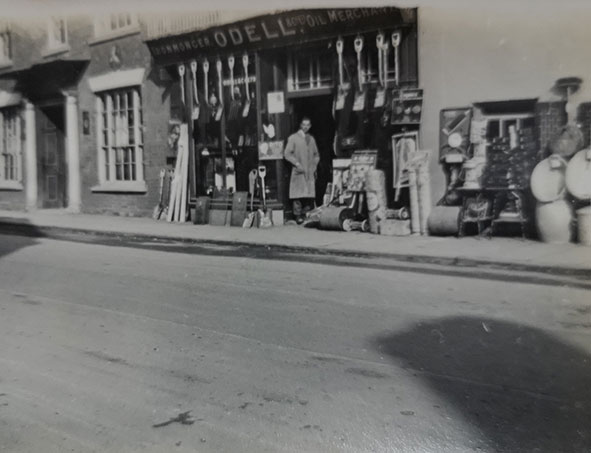 Odell & Co Ltd Ironmongers is bursting with essential items for DIY moments, and all sorts of household essentials. Sammy Jones discovered more about the incredible history of one of our best-loved stores.

From nails to seeds, twine to paraffin, dashel bashers and screws of all sizes imaginable, Odells has everything you require among its 15,000 stock lines (and quite possibly a few things you didn’t know you needed, too).

The independent family run business situated in Stony Stratford’s High Street is more than ‘just another shop.’ It is an institution for its many loyal customers; a place where good service and quality products are assured.

But originally, the Odell name was centred on its premises in Newport Pagnell.

Born in 1818, John Odell began an apprenticeship at the ironmongery and blacksmiths in the town, learning under the guidance of Thomas French.

He clearly did well, and must have had a sound business head too, because by 1850 John was able to buy out the enterprise.

An age gap of 17 years separated John and his younger brother James, and when the time was right for James to begin an apprenticeship, there was no position for him at the Newport Pagnell branch.

Clearly not one to be dissuaded, he went south to London, and learned his trade there. Upon his return in 1863 he bought the Stony Stratford ironmongers from the family of the late proprietor Edwin Revill.

The Odell name was now linked with the two most prominent towns in the area. Today it has a warm familiarity, and the business is a slice of living history.

You might call it an old-fashioned shop with old-fashioned values, which accounts for its continuing success; it is a store operated by people who pride themselves on delivering real service.

“We are attractive to a certain element of people and there are a lot of people around at the moment who are still prepared to support us,” says Richard Odell, who has spent the past half century running the business alongside his brother, David.

Of course recent decades have changed people’s shopping habits – online shopping has decimated businesses, with huge names forever lost from the High Street. And yet Odells are finding a way through: “It’s speed of access with a lot of people – they have to have it now and they can’t wait, and if they press a button, they know it will arrive the next day,” Richard realises, and there has been a big increase in customers making use of their online service, and not just locally.

“We are astonished from how far afield we are receiving orders,” he said, “We’ve even had one from Australia!

“It is down to the public to support local businesses, and not just us, but all the businesses in our town and elsewhere. The business does come with a lot of responsibility, and the current climate is concerning …”

Richard says he and his brother never quarrel, and so while Odells can sell you a heater, you’ll never find the temperature rising in store! While David cares for ‘the shop side,’ Richard oversees the property part of the business, which includes keeping an eye on Odells original Newport Pagnell premises, which closed nearly 25 years ago, but is still owned by the brothers.

The wide stone step to the property has been worn down by the succession of shoppers who stepped over the threshold during its century and a half of trading to access the dark store which was an Aladdin’s cave of bits and pieces. My own ancestors had helped wear that step down!

Today, the building, seated at the top of the town in the shade of the historic St Peter and St Paul’s Church is a restaurant, but it still has the Odell name above the front door.

Everyone in Newport Pagnell either remembers Odells from the past, or has been told about the business – memories of stock, of visitors and of its succession of staff. There is one story in particular that is widely talked about in the town, but is it true, or something of a nonsense?

“The ghost of Emily?” Richard asks, when I mention the young girl said to still haunt the property. “She was in the building next door to the shop, which was to the side between the main shop and Masons Funeral Directors. Evidently she set the kitchen on fire by burning cakes and things in the oven…”

The story says that Emily lost her life in the fire, although Richard isn’t a strong believer in ghosts, and thinks that Emily’s story has ‘been blown out of all proportion. But even he won’t deny there is definitely something about the old place…

“We have had evidence of peculiar things happening – there was a part of the shop where dogs didn’t like going and would shy away from, which was a little bit odd,” he admits.

“We have experienced things that have been moved overnight. It’s not a case of it worrying me, but it is interesting, and you do question ‘how on earth can that have happened?’

“But when you have got a building of that great age, and the history that goes with it and all the characters that have operated within the place, there has to be some form of spirit drifting through, hasn’t there?”

Over in Stony Stratford, the belief is that an ironmongers has been present on the site currently occupied by Odells since early in the 15th century: “That date comes from the Bucks archives, which makes mention of a tinker and a brazier, a form of blacksmith, operating in an orchard in Stony Stratford in 1421.

“We know the area behind our shop was an orchard, and we are right next to The Bull Hotel on the old Roman Road, in the High Street. It’s pretty unlikely it was anywhere else, although we cannot categorically prove it. But we can prove the business on this site goes back to 1740…”

Remnants left by those who used the space in past times have been discovered though: “Over the years we have found all sorts of bits and pieces; when we put the extension on the back of the shop, we had to take walls down and found some old candlesticks, and we found a very early knife and fork in the mortar of the wall…”

Odells boasts its own remarkable past, but it is thanks to Richard and David’s father that our local history is being preserved for future generations; Ron Odell was one of the founders of Milton Keynes Museum.

Was there always an expectation that the brothers would become custodians of the business, or was there a yearning to do something else?

“It was a little bit of both really,” Richard admits, “The opportunity just presented itself. “Because of WWII our father got married later and by the time we had grown up, he was becoming a little senior and someone was needed to take over the business.

“At that time Milton Keynes was just in its embryo state; they had designated the area and there were all sorts of opportunities. Also, retailing back then – at the end of the 1960s – was in a much stronger position. A whole different ball game to how it is now.”

If the shutters were to come down for good it would be a very sad day for the town and the Odell name, surely?

“Yes, but one has to be philosophical about these things. One has to follow the path and take whatever opportunities come our way and see how best we can navigate the course…”

That said, there are no plans to go anywhere any time soon, and hopes are high that another generation from the Odell family will assume position behind the counter in years to come.

Richard added: “David and I have both got families, but they are a little bit in the wings at the moment. There is nobody working in the business just now, but hopefully we can pull somebody back…”