Looking for a new four legged companion? Animals in Need can help with that – they have kennels bursting with felines and pooches desperate to be part of a loving family. But they also have lots of animals that are permanent residents – ex-farm animals. Sammy Jones spoke with the staff in charge of their care…

If you saw our feature in May’s edition of Pulse, you will know that the chickens are the only ‘residents’ who are re-homed. But what about all the other woolly, furry and feathered sorts?

And how do they arrive at the Little Irchester rescue centre?

“They come to us through different ways; either from other rescue centres, through members of the public, or from farms who can no longer care for them,” Abi told Pulse.

“…and then there are those that come in after people have taken them on thinking they would make good pets, without realising just how difficult they can be to look after,” Emma said.

“All the hens are ex-layers, and a few of the goats came to us after the farmer stopped supplying milk and no longer had a need for them.”

Emma has been working for the charity for the past six years. She began volunteering her time while out of work, facing her own issues with anxiety and depression.

She always had a love of animals. Working with them gave her a purpose and helped her mental health enormously.

“I was struggling, and being here was my release. It gives me joy and allows me to express who I am – I am very active and the type of person who is always on the go, and that’s what this place is – active and on the go.”

Emma found her natural home with the charity, and now works an average 14 hour day caring for the rescues in her care, although the work never really stops – days off are mentioned, but I get the impression they never really are relaxing days for the 29-year-old.

“I try not to work seven days a week, but even on my day off I end up doing bits,” she admits, “And you never know what is going to be coming through the gates next!”

As with many of the felines and pooches handed over to AIN, many of the farm animals turn up with sorry stories, and in terrible conditions.

“One of the lambs who came to us sticks in my mind,” she remembers, “A member of the public had pulled him out of the river and he was so weak; underweight, really cold and you could hear the gurgling in his chest and in his lungs, we were preparing ourselves for the worst,” Emma said, “…today he is probably the naughtiest, cheekiest sheep we’ve got!” 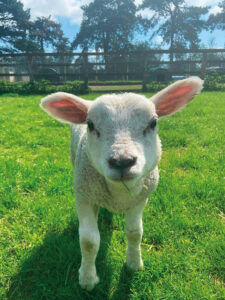 Ultimately, many of the residents that AIN is responsible for simply wouldn’t be there if only people would use their common sense.

“Seven or eight years ago there was an influx of pigs, because people were going out and buying ‘micro’ pigs. But of course there is no such thing as ‘micro’ pigs, they are just piglets.”

Pigs are incredibly intelligent animals, and just like people they can be right ‘sow-and-sow’s’ at times!

“They are not always the nicest of animals,” Emma admits, “They can be very aggressive. They have got teeth and they will use them!

“We lost Mork, but we still have our other Kunekune pig, Mindy, and she is lovely. But if you try to go in with Lola, she will eat you!”

And, have you heard the story about the turkey rescued from a flat? It might sound like it should have a punchline, but this is sadly no joke.

“Thomas the turkey was living in a flat with people, and neighbours were complaining, which is how he ended up with us. He wasn’t socialised with men and he doesn’t like to be around them.”

What was he doing being confined to a flat in the first place?

“The girls who had him thought it would be good fun, and that he was cute. But they didn’t even have a garden…”

People choose to separate how they view pigs, cows and goats from the way they see cats and dogs.

But asked why they feel that way, they seldom have an answer – although you wouldn’t eat a cat or a dog though, eh? At least not in the Western world, we don’t.

They can be just as affectionate, and have their own personalities, the same as the rest of us.

“All the farm animals I take care of have their own loving, cheeky and quirky personalities, much like cats and dogs,” Abi says, “I don’t look at them any differently. I have taken a keen interest in farm animals since I was a small child. It’s a shame they often get overlooked.

“People don’t get the same level of interaction with farm animals, as they do with your standard domestic ‘pets’, and therefore they don’t make the link between ‘food’ and ‘companion’.

“I believe that if people chose to learn more about them and have more interactions, that viewpoint would change.

“Education plays a key role, and it’s wonderful when you get to know them and form a bond.”

Emma agrees: “Anyone who thinks a farm animal is less worthy than a family cat or dog needs to spend time with them to learn how clever they are, and how much love they can give.”

And bonds are made; just like your children, there are favourites!

“I love all my animals dearly, but I am very fond of two of our goats, Emma and Donkey,” Abi admitted, “Emma is boisterous and loves to play. Donkey is very clingy and loves a cuddle. “Rocky is one of my larger sheep and won’t let you forget it! He is my shadow and a very cheeky boy. And Tex is a rescued lamb, who is very fond of a cuddle and a kiss every now and then.”

Some of the animals do take occasional ‘holidays’; the horses take time out, and the sheep go to an organic hay farm for grazing, but even so, caring for so many animals is an expensive business, and the food bill for the farm animals costs in the region of £300 a week.

Veterinary treatments are an additional cost. With zero government funding, Animals in Need is kept afloat by the dedication of its staff and volunteers, and the passion of its supporters.

“We are always looking for hardworking, volunteers to come down and help,” Abi invites, “Donations go a long way too, whether that be money, food or equipment. Even just following our Facebook page and sharing our work with others can help raise awareness.”

> To find out more about AIN’s work visit:
www.animals-in-need.org