Long considered a gardener’s best friend, their numbers are dwindling and our spiky hedgehogs and hoglets are now the ones in need of friends. Luckily for those who get into trouble in this neck of the woods, Animals in Need are dedicated to their cause, as Pulse’s Sammy Jones discovered…

Having more than 200 patients needing to be looked after every day would be enough to give anyone a headache – not least when they are decidedly prickly in nature. But Lizzie Collins doesn’t have a problem with those who are spending their winter in her care – they are all hedgehogs.

Numbers of the spiny mammals are continuing to decline because of multiple factors, but largely because of us. Roads steal the lives of thousands annually, and as we continue to replace green spaces with new builds, and farm the land in new ways, their habitat is simply being lost forever. 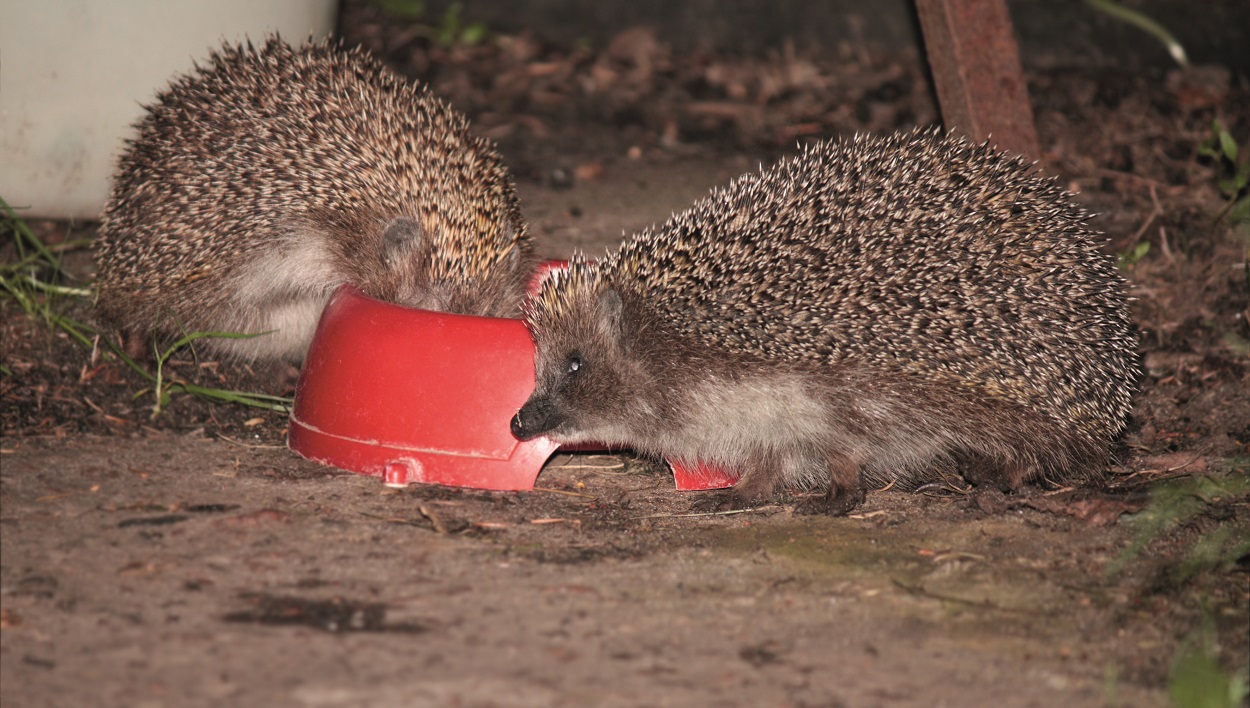 Lizzie and the team at Animals in Need (AIN) are among those making a very real difference at a time when it has never been more important. The reason for the rise in numbers of hogs being brought into centres like AIN? Many are simply too small for hibernation – and that’s down to climate change. “They simply aren’t big enough for hibernation,” Lizzie told Pulse, “They need to be 600 grams in weight to hibernate and we are getting them in at 200-300 grams, so half the size they need to be.

“They are being born later too, because the weather is warmer – it’s definitely climate
related,” she explained. “A lot of the small ones coming in to us this season have a heavy parasite burden, so we treat them with a wormer as soon as they arrive, and give them fluids, just to maximise their chances. “Aside from the young ones, we are still getting the injured adults too,” Lizzie says. Broken legs and eye complaints are all too familiar wounds: “They get their legs caught in drains and fences, and because they crawl through thicket and bramble, eye ruptures are quite a common thing. “They do really well; hedgehogs with a back leg amputation can recover really well…” 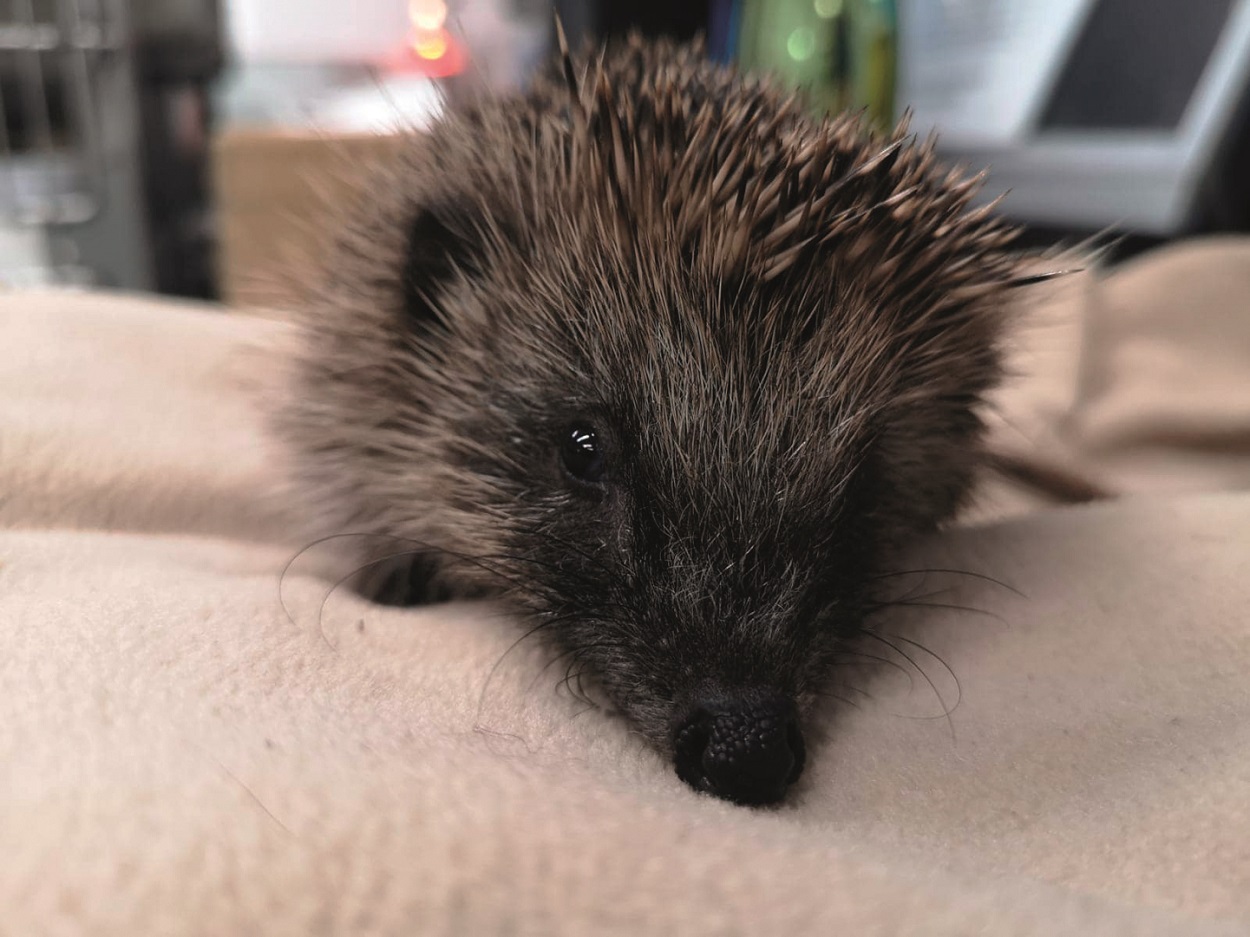 If luck is on their side, hedgehogs can live to be anywhere between two and three
years old in the wild, and occasionally AIN get a particularly elderly lady or gent through
the doors. “When they are old their eyes are slightly duller, their spines lighter in colour and their ears a little tatty, and because they are elderly they usually have few or no teeth. It’s just old-age, isn’t it? In that situation we will find a permanent home for them – somewhere the animal will be looked after with a large space. “When we re-home them we have the same strict criteria as we do when we re-home rabbits, rodents or guinea pigs – we’ll vet the place and make sure the people are right and have a keen interest and knowledge in hedgehogs.

“We want to make sure that for the rest of that animal’s life, even if it’s for a short few months, that it is cared for.” Looking after these gentle creatures comes with a big responsibility. Every life matters at the charity, and absolutely all species are treated equally. But with fewer of them around, caring for the hogs comes with added pressure.
“Because it’s an endangered species, it does make us stress a lot more – it makes us very aware of how much we need to fight and do everything we can to save that animal,” she admits, “But with 210 in my care, I do feel like I have the whole of the UKs population in one room!” 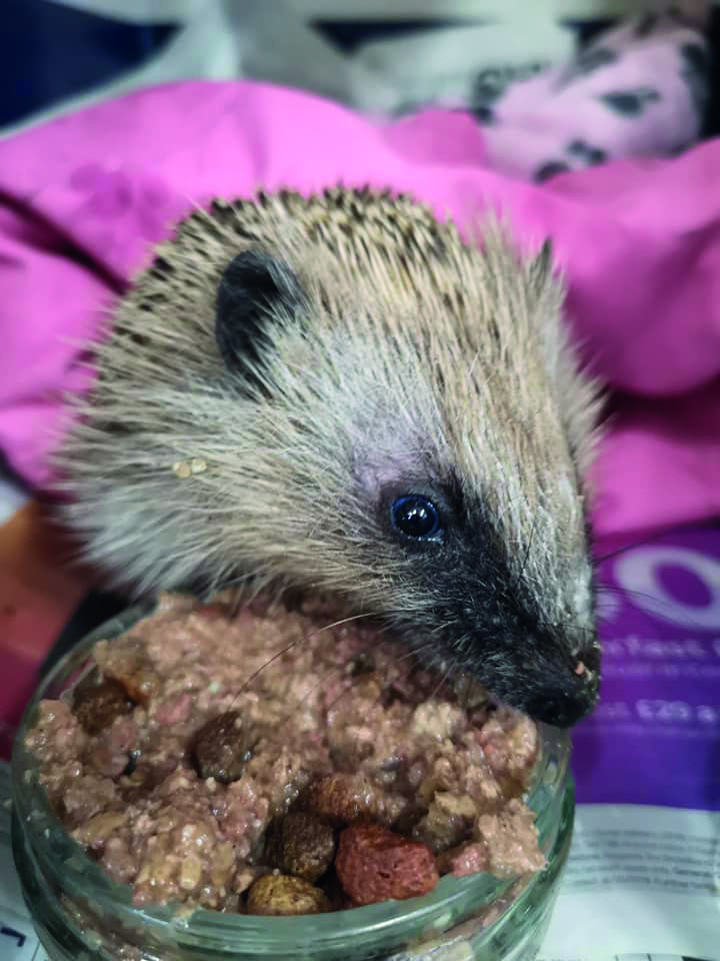 A few of the guests do manage to get some shut-eye and slide into hibernation during their visit, but they are in the minority. “The smaller ones stay inside with us when they are on medication, then we move them outside into big pens with straw, upside down dog beds and heat lamps, so some of them may hibernate, but there is always food and water there for them in case they wake up.”

When it comes to completing the daily routine for the not-so-fluffy balls, it’s all hands
on deck to get the job done!“It takes up to five or six hours of an eight hour day. It’s just relentless, the work is hard,” Lizzie admits, “In the wildlife unit at the moment we have 130 cages. Outside I have another 28 aviaries full of larger animals.”

Lizzie has spent a decade working at the charity and even she questions how the staff manage to get through workload. It’s certainly not glamorous – it’s often smelly, dirty and tiring, to say the least. Anyone who has visited the Little Irchester base for a rehoming, or to drop in a donation, will know only too well the work that goes into keeping Animals in Need the brilliant success that it is.

It’s a charity built on passion and belief, and a refusal to entertain the word ‘can’t.’ Animals come first – and for Lizzie right now, the hogs are at the heart of her workload. “We whizz round cleaning them and feeding them, and then medicate afterwards. We have about 260 bowls to wash, and that alone takes about an hour. Then we have to mash the food and dish it out, which takes another 40 minutes. “It is just a conveyor belt and you have got to go as quickly as you can, because we want to spend time on assessment and their general care. “Hedgehogs are really surprising. They all act
differently and have different personalities, and you won’t really see that unless you work somewhere like a wildlife rehab, but they really do – they are all totally different; some are braver than others, some are more shy than others, and they are really smart.” 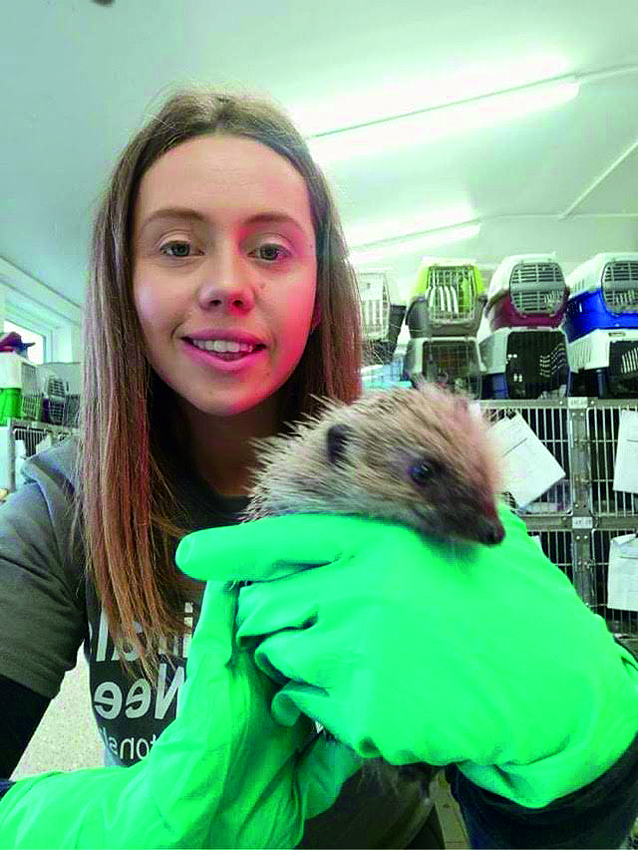 Some of the hedgehogs have been brought in by well meaning members of the
public, who will collect them when the time is right and release them back into the
gardens from which they came. Other people don’t want them back in their outside spaces. Lizzie then finds them safe places. Even the release of the spiny babies currently in AIN’s care is dependent on the weather – usually they would be let go at the start of April, but a nasty late spell of cold weather last year meant the temperatures were too chilly for them to be set free before May.

The long term prognosis for hogs makes for sobering reading. According to data from The
Hedgehog Preservation Trust, since 2000 their numbers have declined by half in rural
areas and by a third in urban spaces, and the species is now classified as vulnerable
to extinction. Let that data sink in. It’s shocking. There’s a very real fear that they could disappear forever.

“That would be awful wouldn’t it?” asks Lizzie, though really, she’s stating the fact, “It would be horrendous. It is so upsetting. You would be showing your kids and your grandkids pictures and saying, ‘Once upon a time we had this spiky animal…’ It is just crazy to have to think like that.” But we can all do more to support and encourage real change. “Look at the Red Kite for example; they were as common as crows years and years ago, so ‘we’ decided to cull them almost to extinction. But with driven, determined people to make successful breeding programmes, you see Red Kites everywhere now. It can be done if people care. “There are so many species that have been on the borderline of extinction, and people have got together and turned it around. “People are butchering the landscape to build on and it’s like a steam train, you can’t stop it.”

Thankfully there is some positivity puncturing the doom and gloom: “I am hopeful that
more people are taking more of an interest,” Lizzie says, “A lot of companies who build the footings and the walls for gardens in new builds are offering to leave a gap in the wall for the hedgehogs – it’s your choice as a purchaser whether you want it. Things like that are really good and on the rise, but everyone needs to be on the same page for it to work. “A lot of people think that someone else is doing something so they don’t have to, but actually everyone could do a bit to make it a lot easier – for hedgehogs and our wildlife in general.”

There’s a hog outside in daylight. It’s probably fine though, isn’t it? “No, it’s not,” Lizzie says, “Most people find them and put them back under a bush, when in fact the hog is most probably unwell with an illness that could prove fatal. If you don’t know what to do, please phone a wildlife rehabilitation centre and get proper information, as opposed to getting involved in arguments, or taking advice from people giving out dangerous, wrong information online.

There is a hog in my garden – what should I feed it? “Please don’t feed them bread and milk, which is terrible for them, and don’t feed them dried mealworms; they contain a really high level of phosphate which stops them absorbing calcium, which gives them brittle bone disease, which is lethal and awful. “Instead, you can feed them Calci Worms as a replacement,” Lizzie advises, “They contain a balanced level of phosphate and calcium, which is not harmful. They taste the same, but are just a little bit chunkier and fatter. The best thing to feed them is hedgehog dry biscuits for their teeth and poultry in jelly for the smaller ones.”

We don’t have hogs where I live… “Grab yourself a cheap wildlife camera, which you can get on well known shopping sites for as little as £20 or £30. They are infrared and can be linked to your phone. You’ll be amazed by what is in your garden. Hedgehogs are out there, but they are nocturnal and elusive, they don’t want to be seen. Just because you haven’t seen one, it doesn’t mean that they aren’t there.”