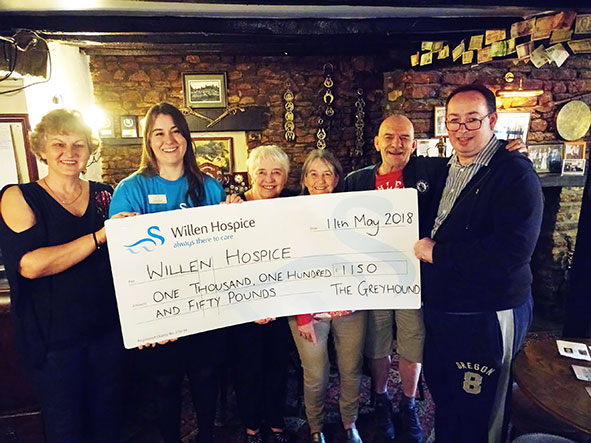 A hog roast held by the Greyhound pub in Haversham has raised more than £1,200 for Willen Hospice.

Landlord David Evans and his team of volunteers began the now annual event in 2016 as a way to raise money after the Hospice cared for his mum, Izzy. Since then, they have raised an impressive £4,000 through the event.

David, aged 47, became poorly himself in January 2017, after suffering two brain aneurysms. The success of this year’s hog roast was made even sweeter by the fact that he could make a return to the bar and serve drinks at the event after making strides in his rehabilitation.

During David’s illness, his Dad Barrie, 79, and a team of local volunteers worked tirelessly to keep the pub open during his time in hospital. They were also the driving force behind the hog roast events.

Sharon Lowther, one of six volunteers behind the event’s success, said: “We are delighted to have been able to raise this money for a great local cause that is close to our hearts. The cheque presentation was also a chance to celebrate the journey that we have been on at the Greyhound over the last 18 months, since David became ill. The community have all pulled together to keep the pub open and we are thrilled to have David back in the pub where he belongs! Thank you to everyone who has supported us in our fundraising and to all volunteers who helped on the day.”