The University of Northampton’s campus isn’t only a welcome environment for students. Thanks to a group of passionate wildlife lovers who study and work there, nature is flourishing too.
And those making the difference have just bagged a prickly award for their efforts.
Sammy Jones found out more. 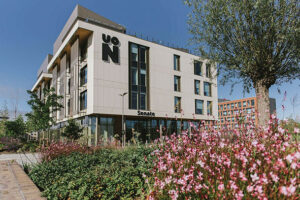 Before Northampton’s Waterside Campus opened its doors in 2018, the landscape had been abandoned for a long time, and by and large it wasn’t a welcoming space for wildlife.

Janet Jackson, a teacher in the Faculty of Arts, Science and Technology, was among those who wanted to turn that on its head, and she decided to launch Project AWESOME.

Quite literally awesome by name, and awesome by nature, the acronym stands for Assessing Waterside’s Ecosystem Services, Observing and Monitoring the Environment. Janet met with landscape architects early on in the design process; and they were keen to encourage wildlife to the new site too.

Although they were relatively few, there were some interesting ‘finds’ in those early days: “There were valuable habitats around the perimeter which had been protected by the developers,” Janet explained, “There were some patches of interesting brownfield plants on concrete and tarmac, with mosses and lichens.”

There was an attempt to retain some of the discoveries.

“The developers scrapped some of this urban tundra and piled it up into a corner to see if we could save some of the species,” Janet said, “However the rest of the site was like a blank canvas because of the remediation of the old generation station and the removal of the derelict Avon factory.” 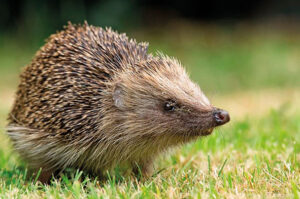 And yet the River Nene flows next to the new learning space. Conversations were held with the landscape architect about planting to reflect the tranquil location; native species of trees, large pollard willow trees, turf sown with seeds of meadow plants and wildflowers in wetland depressions and horticultural areas with plants recommended for pollinators were introduced.

It sounds simple enough, but were it not for the efforts of Janet and her fellow wildlife welcomers, these vital elements would have been missed at the planning stage.

Instead, the team – who span different academic subjects and professionals from across the university – can be blooming proud of what they have achieved.

“Fairly soon after moving onto campus, staff and students were reporting regular sightings of an otter swimming alongside our buildings, so we created a Facebook page for people to post their wildlife sightings,” Janet recalled.

Remember the famous line, ‘If you build it, they will come’?

Well, if you plant it, they will come too. And they have; plenty of birds and animals frequent the spaces which are thriving with life – and the river is a haven too.

“We regularly see herons, cormorants, ducks, geese and swans along the river,” she said.

Now the university has received a national award for being Hedgehog Friendly.

In 2020 the British Hedgehog Preservation Society gave it a bronze certificate as part of a national accreditation scheme, and that has been improved upon in 2021 with a silver certificate awarded.

The uni has a number of measures in place to support our cone-faced cuties; it has installed hedgehog ‘highways’ to allow the animals to pass through the campus, and plaques have been installed to raise awareness among staff and students.

Additionally, ‘habitat piles’ consisting of cut branches and leaves have also been left in the grounds as a source of food and shelter.

Student Freya Smith is the brains behind a ‘Hedgehog Squad’ on the campus which has been largely responsible for their success in the area.

“With university campuses taking up a large amount of space, it is important to promote conservation as a facility of education – many wildlife species are struggling and we want to do something about it,” Freya, who is in the second year of her Games Design degree, told us.

“In 2020 hedgehogs were placed on the red list for UK mammals as they are critically endangered in the UK; their numbers have declined severely.

“The award means that our efforts to help make the campus suitable for hedgehogs have been officially recognised. Even during these difficult times with a pandemic, we have committed to making sure that we strive to improve the campus environment and will be heading on to completing the gold award for next year,” she added.

Janet said: “I am so proud of the team, including Freya, and second year student Jack Fender, who pulled together the evidence that shows that Waterside Campus was meeting the Silver Award criteria. An awesome team of students and staff have made great efforts to safeguard and help protect hedgehogs at Waterside Campus for the past two years.

“Our staff who look after the sports pitches have even worked to make sure their nets are lifted off the ground when not in use, as hedgehogs can get entangled in them.

“Another welcome addition is that hedgehog conservation measures are now officially written into the university’s procedures and policies, helping enshrine the safety of this precious and, ecologically, very helpful animal.

“The university is very supportive of measures to continually improve biodiversity, the UON Ecology policy was one of the documents that the British Hedgehog Preservation Society wanted to review for the Silver Award. The team who manage the university grounds are also ecological enthusiasts and are always ready to jump in and get involved. They have created gaps under fences to allow hedgehogs and other mammals to enter the campus from the south section of the perimeter.”

All the measures being taken at the university are awesome for the flora and fauna; bats have also been discovered in the area, and no less than 78 species of birds have been counted.

But green spaces are good for our mind and spirit too, and never has that counted for so much than during the past year or so.

“The project had a few ambitions, firstly to monitor the planting schemes and see what wildlife made the Waterside landscape their new home; secondly to raise awareness and to encourage the enjoyment of the green spaces around us for our health and wellbeing, and then to educate staff, students and visitors on how we can all make urban landscapes more biodiverse.

“The experience for students is very special, it is an opportunity to see specialists from a variety of disciples working together to achieve goals and they realise that they can contribute and be valued as a team member too.”

The AWESOME project aims to enhance, conserve and protect the wildlife on the university campus. And student or not, that is a lesson we can all learn and apply to the spaces where we live and work.

It’s great for the animals, birdlife and plants that flourish, and it is great for us too.

> For more on the work of Project AWESOME visit their FB page: UoN Project Awesome or drop an email to project.awesome@northampton.ac.uk