Having struggled with more tragedy and obstacles than many, Helen Knight had been blighted by decades of depression.

Twelve months ago, Helen Knight was nearing the end of a long term relationship with a particularly traumatic break-up.

Despite going through difficult times, she was still supporting others; for more than 20 years she has worked with children with autism and complex health needs, writes Sammy Jones. 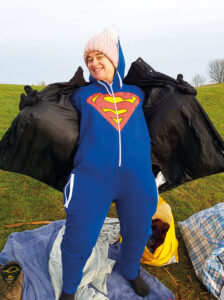 But Helen was battling decades of self-loathing following a difficult childhood; she was sent reeling when her 13-year-old sister was murdered in Northampton when Helen was just 11-years-old. A year later and tragedy struck again when her mother died.

Helen had tried to mask her issues with food which had left her morbidly obese. The first lockdown was almost the final straw.

“I was in a very bad place, and had considered ending it all,” she admits, “But I knew that couldn’t really be an option as I couldn’t put my two daughters through the pain that I had endured in the past…”

Helen felt desperately sad as her depression worsened, and the incredibly hot summer days left her feeling irritable and stressed. With rising temperatures, Helen visited the River Ouse to cool off.

“Unfortunately, so had many others, and I didn’t want to be around other people – especially as I found it hard to control my emotions and couldn’t stop crying at times.”

But in the water, Helen would swim away to a quiet place and let the water soothe her: “I realised that when I was in the water, I felt much better.”

Her trips to the river became a daily fixture; sometimes she would spend a couple of hours there. Her visits were clearly having an effect on her mood, and as the fog cleared, little chinks of light began to show through.

“I’d given up long ago thinking that I could lose weight, but as I began to feel better, I started to think that maybe I could stop the junk food and it might help my depression to improve – and I knew that if I could even drop just a stone in weight that the pain I was feeling in my feet, knees and back would be better.”

Applying herself to this new regime quickly began paying dividends: “My depression became manageable and the weight started dropping off,” she says modestly.

Actually, in just nine months, Helen has ditched her size 24 clothes and is now a slim size 12. 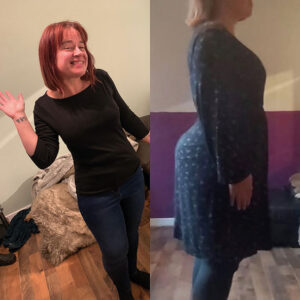 She has lost an incredible six stone!

When the weather became colder, trips to the river were ditched in favour of outings to the local swimming pool before lockdown number three scuppered that.

Helen struggled to control her mood before someone suggested that she take up running; and like millions before her she downloaded the Couch to 5K app.

“It was hard at first, but I kept at it. I never wanted to feel as low as I had felt earlier in the year, and used that as my motivation to keep going.”

With hard work and determination, baby steps turned into considered strides – and she can now run an impressive 11K.

But Helen still wanted to return to the water, and decided to pluck up the courage to take a river dip – in bitterly cold January. At a time when the rest of us were wrapping up warm and making the most of the central heating, Helen was donning a swimming costume (and hat) and making a splash.

“Overcoming my mind and actually doing it gave me one of the biggest highs. I was buzzing from it.”

Then she decided to set another goal – a sponsored 15 minute open water swim to benefit Little Irchester’s Animals in Need charity.

“I belonged to a dog walking group run by Nathan Watson, he doesn’t charge but raises funds for the charity instead. It’s a great community. Through Nathan I met Annie who runs Animals in Need – she is an incredible woman, but she doesn’t see how much she helps not only the animals in her care, but the team around her.

“I wanted to return all the support I had received, and also show Annie that she is my superhero!”

Helen began visiting the river three times a week, building up her resilience to the cold in small increments.

And then she caught Covid and was forced to isolate for 20 days. Instead of the river, she began taking cold baths, “…which was much harder mentally and physically as you can’t move. It is difficult to distract your mind from the pain. I was playing music and took to singing at the top of my voice to try and distract myself!”

On one occasion the water was so bitterly cold that she fled the bath, gutted that she had jumped out before the 10 minute timer had sounded. Then she realised she hadn’t set the timer – she had been in an icy cold bath for 17 minutes!

“My body was struggling, my legs were numb but burning at the same time. I stood under the warm shower trying to warm up, then got dressed in lots of layers and climbed under several blankets.

“It took me an hour to stop shivering and shaking. But it was exhilarating too, and I knew then I could do it.”

And on a chilly mid-February morning, Helen journeyed to Pitsford Reservoir for the culmination of her training – to raise a packet for the charity and to smash her demons in the process.

Fifteen minutes later she emerged from the water; wet, shocked with the cold, but victorious – and with the proof of her journey live streamed on Facebook, her achievement will now serve as inspiration to others. And she has lots of words of wisdom to those of us, reading this at home, thinking that Helen is amazing, but that we couldn’t do it.

“My advice to others that are struggling with depression is to start by taking small steps. The past year has taught me I’m so much stronger than realised, and that I can achieve anything. Mental pain is far worse than physical pain,” she says, with reference to beating the cold water challenge, “I would rather do a 15 minute open water swim every day than feel at my lowest again.”

As the 12 month anniversary of her amazing journey approaches, Helen is looking to a bright future: “I can’t wait to set myself new challenges and make the most of life. As women we need to do more to encourage each other to reach our full potential and to believe in ourselves…”

And she’s set to continue splashing about in the river: “It’s addictive,” she promises, “Although I will be glad to go for just a dip now!”

> You can support Helen’s charity fundraising for Animals in Need by making a donation – it’s much easier than open water swimming in February, and the animals will be very grateful!
Visit www.animals-in-need.org and click ‘donate’