From rogue crayon doodles on his parent’s walls to having his work exhibited and collected around the world, Craig Alan’s prominence in the contemporary art world is something his earnestly creative seven-year-old self could have only dreamed of. With his distinct style of using hundreds of tiny figures to create portraits of world-renowned icons, Craig has captured the imagination of art lovers across the globe. A combination of wit, skill and intricacy, each piece is endlessly fascinating to observe – with tens and often hundreds of individual people integrated into the artwork, you’re sure to always spot another quirky detail with each look. 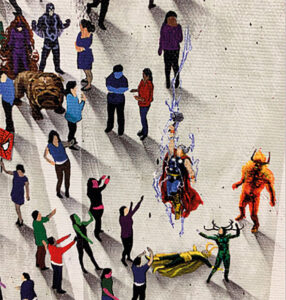 Continuing his ‘Icons’ series, Craig has just released the Limited Edition “Marvelous Stan Lee” as a tribute to the late Marvel Comics legend. In his signature style, the visage of Stan Lee emerges from the gathering of minuscule figures which, on closer inspection, are revealed to be many of the comic book heroes and villains Lee helped bring to life. The Hulk, Iron Man and Captain America are just some of the 206 tiny elements that are featured, the most Craig Alan has ever included in one single piece of art. Each character is hand stencilled before Craig painstakingly adds faces, clothing, accessories and shadows; the finished product is bustling with life and truly a marvel to behold. With Easter eggs galore and a hidden message immersed in amongst the liveliness on the canvas, “Marvelous Stan Lee” is joy to behold for comic book fans of every age.

Stan Lee was a hugely prominent in the Marvel universe up until his death in 2018, both in terms of his status as a legend in the comic industry and through his active engagement with the running of the company. Known for making cameos in his films, he approached every aspect of his role as Marvel’s primary creative leader with enthusiasm and passion, continuing to write, produce and edit well into his 90s.

Lee co-created notorious characters like Spiderman and the X Men, helping Marvel Comics to become a huge multimedia corporation. Unsurprisingly, Stan Lee boasts an impressive collection of accolades, such as the American National Medal of the Arts for his services to the comic book industry.

Craig Alan has created a beautiful and jam-packed tribute to Stan Lee that’s sure to capture the imagination of anyone who loves a good superhero story. “Marvelous Stan Lee” is available to view on our website, www.therosegallery.co.uk, so why not take a look for yourself and see how many Marvel characters you can spot!

To get your digital copy of MK Pulse sing up and subscribe.