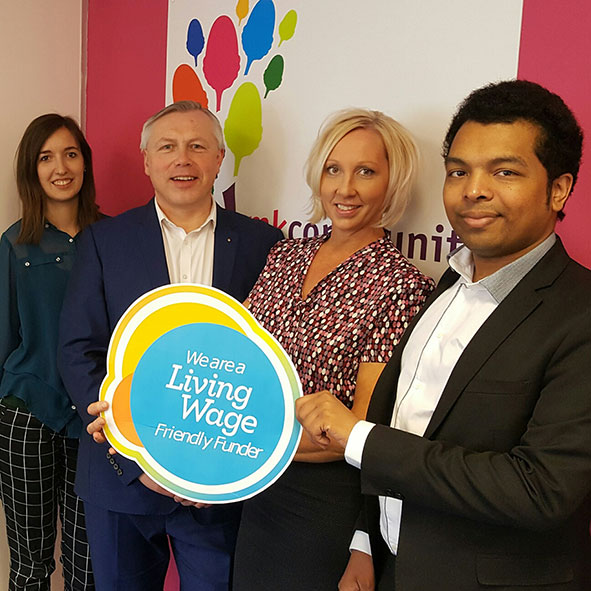 As part of their commitment to being a Living Wage Friendly Funder, MK Community Foundation supports successful applicant charities to pay the Living Wage to any grant-funded staff posts.

Living Wage Friendly Funders themselves are Living Wage Employers and then, where possible, also encourage grantees to become accredited employers over time.

Living Wage Friendly Funders work together to end low pay in the voluntary and community sector.

Thousands of charities and funders have already embraced the real Living Wage across the UK, but low pay remains a significant challenge across the sector. The Living Wage Friendly Funder scheme has been funded by People’s Health Trust and developed in collaboration with a range of funders including Trust for London, Barrow Cadbury, the Joseph Rowntree Foundation and Comic Relief.

The minimum wage for those aged 25 and over in the UK is currently £7.50 an hour in the UK, but the Living Wage, a voluntary rate which is set independently and calculated in accordance to the basic cost of living in the UK, is considerably higher at £8.45, rising to £9.75 in London.

“We are delighted to recognise MK Community Foundation as a Living Wage Friendly Funder. The leadership shown demonstrates a commitment to tackling the serious problems that low pay brings to our communities.

“Many organisations in the voluntary and community sectors are working hard to tackle social injustice and poverty; it’s only right that those committed to these roles are afforded at least a Living Wage. We hope to see many more funders and corporates follow the lead of MK Community Foundation and the other Living Wage Friendly Funders.

“At a time when half of those in poverty live in a household where someone has a job, the real Living Wage is much needed by families across the UK. The Living Wage is a robust calculation that reflects the real cost of living, rewarding a hard day’s work with a fair day’s pay.”

“So much of the poverty and financial hardship reported in our community through our Vital Signs MK publication is a result, at least in part, of low wages not keeping up with the cost of living.  It’s for this reason that the Community Foundation is proud to promote and support the Living Wage campaign and to assist organisations in our local community and voluntary sector to transition their paid workers onto a Living Wage.  As a Living Wage Funder, we will be helping local groups and organisations to make that change and to help lift local families out of poverty.”

“People’s Health Trust is pleased to welcome MK Community Foundation as the latest charitable funder to join the Living Wage Friendly Funder network. By becoming part of this rapidly growing scheme, they have demonstrated their commitment, as a funder, to working towards ending low pay in the voluntary and community sector.
“We want to see the Living Wage become the norm, and believe that funding organisations can lead the way in making this happen within the voluntary sector.”