For the last four years, Sue Adkins and her husband Phil have hosted a summer Afternoon Tea Weekend to raise money for good causes. This year, the couple raised a fantastic £3,240 for Northamptonshire Health Charity in aid of The Heart Centre at Northampton General Hospital.

170 delicious afternoon teas were booked for the event over the first weekend of June. As the collection/delivery options proved so popular when things couldn’t go as planned due to the pandemic last year, Sue decided to offer them again for 2021 and people snapped them up very quickly. It’s no wonder with all of the gorgeous home-made tasty treats being offered. So much hard work goes into this event, with all the preparation, the event itself and the clear up afterwards. All this while recovering from a knee replacement operation Sue had 3 months prior made it quite the challenge. 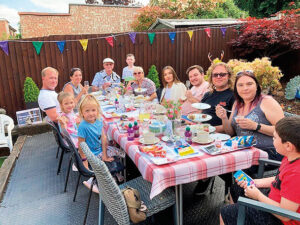 It’s not just the same food each year either, as Sue likes to mix it up and do new things each time. This year included a mouth-watering freshly made cheesecake which was truly divine. Do spare a thought that this meant Sue had to make 170 of them and that was just one of the many items in the tea. With 170 scones, 170 sausage rolls and all the other yummy sandwiches and snacks it’s no wonder Sue and family were up baking and preparing until 11:30pm on the Friday night.

As well as preparing all the teas for collection and delivery, Sue was able to offer four sittings of 25 people in their lovely garden, which is how the afternoon tea weekend originally started back in 2018. Helping towards the funds raised, the raffle was more popular than ever with all books selling out a couple of weeks before the event and more having to be ordered. The tombola held over the two days also proved very popular.

The previous three year’s events all presented a unique yet overwhelming new challenge that Sue and team always manage to overcome. While it was a case of anticipating what this year might throw their way, thankfully there wasn’t really anything to compare with those previous troubles. These included a scorching heatwave, torrential downpours and of course the COVID19 pandemic.

Sue and Phil were able to present the funds raised from this year’s event to Junior Sister, Kim Bruley and Sister, Ines Barbeito in The Heart Centre. “We chose the heart centre this year as my mum was taken in to have a pacemaker fitted earlier this year,” explains Phil, “It’s just our way to give a bit back to the hospital for the care they have given to all our family members.”

Over the four years, the annual weekend event has raised an astronomical £8,845 supporting the Stroke Unit in 2018, Dryden Ward and Dementia Care in 2019 and last year it was the Diabetes Centre and Oncology department. It is a real team effort that makes it such a successful fundraiser so everyone involved deserves huge praise – Sue and Phil, daughter Emma and her partner Andrew; their son, Rob and his partner Shannon; and sister, Lesley Tilling.

“People started asking about next year’s event before this one was even over and myself and Emma have started discussing plans,” said Sue.

Rob Powell from Northamptonshire Health Charity said, “This is such a wonderful event to support each year and the charity are so grateful to Sue and everyone involved for raising so much money to support different areas across Northampton General. The Afternoon Teas are delicious, so I’ll be getting my order for next year in early!”

If you would like to hold your own event or do some fundraising to support a ward or department that means a lot to you and your family please contact the Northamptonshire Health Charity
team on 01604 626927
email greenheart@nhcf.co.uk
or visit the charity’s website: www.northamptonshirehealthcharity.co.uk