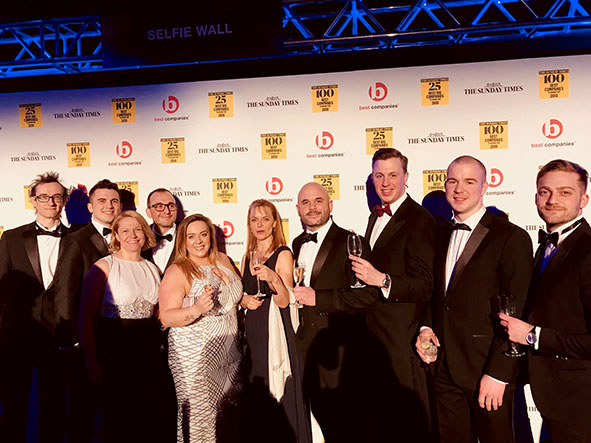 One of the UK’s fastest growing pub groups, Oakman Inns & Restaurants Ltd, which operates The Navigation Inn near Thrupp Wharf, Cosgrove has again been voted by their own team as one of the top employers in the UK, coming 17th in The Sunday Times 100 Best Companies to Work For.
The 2018 Best Companies list which “celebrates and showcases the very best in workplace engagement” were revealed at an awards ceremony held at the Battersea Evolution venue in London’s Battersea Park last Thursday, February 22nd.
Oakman Inns, which currently employs just over 750 people across its 20 pubs, inns and restaurants – seven of which double as small boutique hotels (see below) – has also secured a Best Companies 3 Star “extraordinary” accreditation, which recognises the highest standard of workplace engagement and represents organisations that excel. This is the third year that Oakman’s team culture has been given this accolade.
Headquartered in Tring, the company, which was founded in 2007 by CEO, Peter Borg-Neal, has redefined the concept of the modern public house, successfully transforming both historic coaching inns and modern buildings into all day contemporary spaces with a strong sense of identity and integration within their local communities.
Their first venture was The Akeman in Tring, Hertfordshire, which set the standard with a wide choice of drinks, imaginative Mediterranean-inspired and modern British food menus. All their dishes are freshly prepared in an open theatre-style kitchen using a charcoal grill and wood-fired oven, with an emphasis on freshness, quality, sustainability and taste.
The Best Companies survey examines company life and reveals how employees really perceive their working environment. The research looks at a total of eight engagement factors such as working conditions, company values, employees’ opinion of their managers and how valued they feel.
Oakman’s Operations Director, Alex Ford, said: “The entire process is about as objective as it can get, and the score is based upon what our people say about where and how they work, as well as engagement experts examining how the entire HR process from training to pastoral care is undertaken. This is so important for us because we’re a people business, and good customer contact and relations are born out of confident, happy, well-trained staff, who are always engaged in trying to be the best they can be.”
Oakman has already won two other HR awards over the past four months, recognising the efforts of their HR team led by HR Director, Jill Scatchard:
Jill said: “We were one of 40 UK companies recognised by The Princess Royal Training Award for training excellence last November and also won the British Institute of Innkeepers’ National Innovation in Training Award (NITA) for Best Casual Dining Training Programme. Much of the effort is actually taken by our team when they use our interactive training software, Oakmanology. We developed it over two years and launched it in late 2016 and it has revolutionised our teams’ training. We can give them new skills, new responsibilities and fully developed careers as a result of our growth and their training success.”
Peter Borg-Neal, Oakman Inns CEO, added: “We are delighted to be in the top 50 for the fourth year running and to have achieved the maximum Three Star accreditation for the third time. We see the achievement of high levels of employee engagement as key to the success of our business.”