If you love live music, The National Bowl has probably rocked your world at some point. The former clay pit has four decades of delicious rock ‘n’ roll history. Sammy Jones looked into its past, and spoke with some of those who have headlined at the venue…

Based on the design of Hollywood’s revered Hollywood Bowl, Milton Keynes’ open-air hot spot has proved the perfect place for music fans to get their fix. But it wasn’t bands that offered the first spectacle there – it was a Balloon and Kite Festival on May 26, 1979, though the ‘atrocious weather’ led to the balloons using an adjacent field, leaving the Bowl free for kite-flying.

Music finally got a footing when Desmond Dekker played on September 8, 1979 on a bill alongside Geno Washington and the Ram Jam Band.

“They played to an audience of about 5000 which for a large site was sparse, but it was a start,” remembered Phil Winsor, who at the time was the environmental health officer with MK Council.

When The Police played in 1980, the perimeter fence only had a small number of entrances and 30,000 was the maximum audience permitted.

It was the first big date at the venue, and arguably holds the title of muddiest show too.

Ian Hunter played early in the history of The Bowl when his own band supported Thin Lizzy in 1981. He played decked out in top hat and tails, plus his customary dark glasses.

“I remember Phil Lynott offering to babysit our baby son while I played because my wife wanted to watch the gig, and he did, for a few songs anyway,” Ian recalled.

Queen played less than a year later, and a ticket would have set you back £9.30.

Infrastructure improvements allowed for 10,000 more ticket sales, but the police weren’t worried by any increase in audience numbers: “Queen are a very popular group and attract middle-of-the-road clientele,” they said, confident their team of bobbies “can deal with whatever happens.”

Brian May remembers the day well: “For some reason everything conspired to make it a great day – the sound was right on stage and off, and we were just very, very locked in. It is a notable show for things like Staying Power, a song on the Hot Space album. It was a very radical departure, and people were saying, ‘This isn’t rock ‘n’ roll. What are they doing?’ But when they heard us do it at Milton Keynes it changed everything.”

Genesis played the same year, reuniting with their former lead singer Peter Gabriel for the one-off date and despite more rain and muddy conditions they smashed attendance records.

In 1983, David Bowie became the first artist to hold court for three consecutive nights when he brought his Serious Moonlight tour to town.

Police reacted robustly to the biggest shows the new town had ever seen – cancelling rest days and putting 100 officers on duty. Just 17 arrests were made during the entire run.

Millions of people will have their own memories of days spent watching their most favoured at the venue, but The National Bowl conjures up just as many special memories for those who were on the stage looking out.

Status Quo played in 1984 and had the show – part of their End Of The Road tour – filmed for release. It still feels fresh in Francis Rossi’s mind: “They were the days when things were much more macho. Our audience were all men with tattoos on their testicles. They were that tough!”

Michael Jackson famously played the venue in 1988: “That was the big one – tickets sold like hot cakes and the capacity was increased by 5000 to 45,000 – providing the extra tickets were sold to MK residents out of the Civic Office box office facility,” remembers Phil Winsor.

Tim Parsons and Maurice Jones, and their company MCP also made the most of our venue.

“It was good to go,” Tim says, remembering the space, “You didn’t need to create the site, it was already there. It was quite secure, had really good communications and was a lot cheaper than Wembley Stadium, which had a lot to do with it,” he admits.

Tim’s first big MK show was U2 and the great British weather rained down on the parade – 100 Red Cross staff were kept busy with concert-goers suffering the effects of the cold, and those who slipped in the mud bath – there were 500 casualties in all.

In 1999 Metallica brought their Big Day Out to town, but one of the special guests on the bill grabbed the lion’s share of the headlines. In the aftermath of the Columbine High School massacre, media outlets suggested the perpetrators had been motivated by the music of Marilyn Manson. Manson was an easy, unjustified, scapegoat and there were calls for him to be banned from the date.

MK MP Phyllis Starkey rose to his defence: “The atrocities in the USA were the result of their lax attitude on guns, and anything else is just an excuse,” she said. Sense prevailed, and Manson played the show.

Queens of the Stone Age were largely unknown when they played low down on the bill that day, but they returned in 2001 to share a bill topped by AC/DC.

“That was a dream come true for me,” former bassist Nick Oliveri said, “AC/DC was the soundtrack to my childhood, so it was a big thing for me. I really love that band…”

In 2003, Eminem enjoyed a three night stay, although Milton Keynes didn’t seem to make its mark on him: “Word up, London!” he said, addressing his audience.

The Gallagher brothers spent a sun-drenched weekend entertaining here in 2005, and reformed pop royalty Take That enjoyed a two night stand back in June 2006.

“Originally we were going to be doing Wembley Stadium, but they hadn’t finished it,” Mark Owen recalled, “The Bowl really was amazing, and such a beautiful venue. It felt exciting to be playing places like that again.”

Green Day, Linkin Park and The Prodigy all played their largest headline shows at the venue, and followed Queen and Status Quo by releasing their performances to DVD.

Bon Jovi take the record for the most visits to the venue. They have filled the Bowl on five different occasions. The first time, they rocked up with a supporting cast of Skid Row, Vixen and Europe on a sun-drenched August day in 1989.

“Oh man, the first time we played there was amazing,” former Bon Jovi guitarist Richie Sambora remembered, “That was big, big, big for us back then.

“I really thought I was playing Woodstock – that’s the way it looked to me! I thought it was cool.

“Our shows there were very, very memorable gigs…”

Foo Fighters headlined the venue for the first time in July 2011.

It was special for the whole band, not least guitarist Pat Smear, who got to follow in Queen’s footsteps: “It’s really exciting to play, because there was the famous Queen concert at the MK Bowl,” he said, “I know the venue so well from the video footage. It feels like ‘Wow, really? Us? We’re really doing this place?’”

In February 2012 work began to remove the stage structure at the venue in a move to increase capacity on the site and overcome safety risks associated with the old stage.

The iconic ‘house roof’ had supported the lighting rigs, sound systems and video walls for world famous artists for two decades, but as productions became ever more spectacular and complex it was no longer sufficient to safely accommodate the weight of equipment.

The first show at the venue following the removal took place the same year with electronic music supergroup Swedish House Mafia in control.

Kings of Leon and Pearl Jam used the venue in 2014, and Electric Daisy Carnival (EDC), a colossal force on the world’s dance stage, made its debut on MK soil in 2014, with appearances by Avicii and Calvin Harris. It saw the world’s largest 360 degree digital lighting installation in use, and DJs performing across four stages.

EDC returned in 2015, but otherwise the venue looked like being quiet.

But then the misfortune of one of rock’s finest frontmen turned into the Bowl’s good fortune. When Dave Grohl took a tumble from the stage in Gothenburg, the Foo Fighters had no choice but to cancel upcoming live dates, including shows at Wembley Stadium and a bill-topping set at Glastonbury. “I will do everything I can to come back and give you a night to remember for the rest of your lives as soon as possible,” Dave promised his fans, and a little over a month after the fracture the band announced two September dates at the National Bowl.

Grohl played the shows seated in a custom-built, Game of Thrones-inspired iron throne, adorned with guitar necks and flashing lights, which was ridiculous and wonderful in equal measure.

As for the future?

In late 2019 Milton Keynes Development Partnership and MK Council reached an agreement with MK Dons to allow the football club to develop a new state-of-the-art training facility at the venue.

Twelve football pitches, changing, fitness and medical facilities will all feature in the ambitious plans.

MK Dons chairman Pete Winkelman said: “The Bowl is an iconic venue which has played host to some of the world’s biggest and best and we will do all we can to respect and nurture the site.” 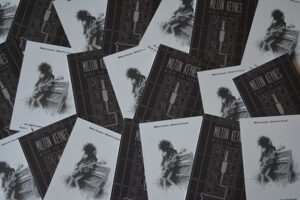 Taken from the book ‘Milton Keynes – Wired For Sound’ by Sammy Jones, which is out now.

Visit Facebook: @wiredforsoundmiltonkeynes for details and to order copies.