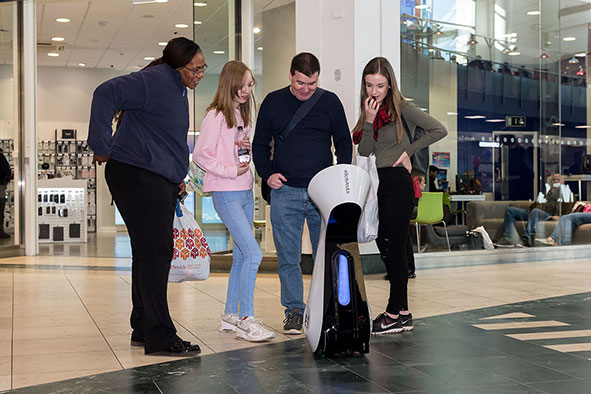 A revolutionary robotic retail assistant was unveiled at intu Milton Keynes over the weekend to test shoppers and retailer’s reactions.

Bo, Europe’s first ever shopping centre robot, interacted with shoppers at intu Milton Keynes this weekend, directed them to different parts of the centre and collected feedback about their shopping experience. It also told shoppers about special offers they could take up at Starbucks and Pret A Manger, designed to test the potential of the technology to drive shoppers to stores and other locations.

Robot specialist BotsAndUs, the brains behind the one-meter-high ‘shop-bot’, is one of seven start-up businesses collaborating with intu to test new retail technology at its shopping centres and online at intu.co.uk. The robots have been used in the hospitality sector before but this is the first time the company has run a shopping centre trial.

BotsAndUs is one of several other innovations that are being trialled as part of intu Accelerate, a ten-week start-up incubator being run by intu to develop new technologies for UK retail.

David Fischel, intu chief executive, said: “Retail has always been an inventive industry and the UK has remained at the forefront of this. We’ve launched intu Accelerate to drive forward innovative technology that will entertain and engage shoppers and help businesses to flourish. It’s giving talented new businesses like BotsandUs and WoraPay the opportunity to trial their ideas within live environments and test their potential to shape the future of retail.”

Andrei Danescu, BotsAndUs CEO, said: “Robots in retail are still very much a novelty, especially when supporting shoppers with practical tasks such as helping them to find what they are looking for or to take advantage of the latest promotions. We are extremely excited to work with intu and bring Bo to a British shopping centre in a European premiere.”

The other companies taking part are:

Percent, an app that helps shoppers raise money for charity as a small portion of their debit or credit card spend is automatically donated by retailers to their chosen charity.