We are constantly being told that it’s good to talk, to share our feelings, and that ‘it’s ok not to be ok.’

Northampton-based musician Simon Turner would most definitely agree, and earlier this month launched a new EP to swell the coffers of the mental health charity, Mind.

Simon was given therapy and medication, but the root cause of his issues wasn’t addressed for decades.

“It wasn’t until 2018 and the loss of my job, my marriage, home and a severe breakdown and suicide attempt that I sought further help,” he admitted.

“Now I have finally been able to reflect and identify the traumas that were my triggers.”

Whenever Simon has struggled, Mind has been there for him – and he repays their support through his music-making; previously he curated a fundraiser CD, Top of the Punks which featured tracks from luminaries including Stiff Little Fingers.

Cash generated from the new EP ‘My Crisis of Confidence’ will also support Mind.

“It’s an incredible charity providing guidance, counselling, therapy and places to meet and chat for those in desperate need of help. If you have one near you it is really important that you help them directly if you can. Your money will go towards paying for much needed services to help extremely vulnerable people in all walks of life.”

The EP itself is a blast of freshness – even though some of the ideas were originally put down in the studio, nigh on 20 years ago!

“They were sketches I had intended to share with the band I was in then, but ultimately I was too unsure of myself to do it. I thought at least some would have potential but doubted myself.

“Most of my mental issues come from my own sense of purpose, self respect and confidence. So I continued to facilitate the booking of gigs, promoting, recording, mixing and producing for the bands I was in, while they wrote the songs.

“I joined Milton Keynes-based Jonny & The Mental Breakdowns as their bassist in 2019. It’s the most apt band name ever! During lockdown I was taking ideas that frontman Jon would send me and making them into produced songs. I was getting pretty good at it. Then Jon had a stroke. It was scary, but meant I was twiddling my thumbs. Part of my recovery programme is to do things I’ve been shy about doing; suddenly I had the time and motive to do something of my own. It was either that or go stark raving mad in isolation.”

He roped in a few pals for the session, including members of Northampton’s big band Jazz Colossus, and Paul Weller’s drummer Ben Gordelier.

“I met Ben when we worked at the Professional Music Technology store in Northampton in the noughties. We became good friends before he went off to become an international rock star. We lost touch for a few years, but when I disappeared one day when I had given up on life, he was the one friend who got in his car to try and find me. We’ve been close ever since.”

This new EP is a cracker, but it might shock a few people who know Simon for his punk rock background…

“I’m known for playing in punk bands, but I’m an indie kid at heart and that’s what you can hear. And with the track ‘Nova Scotia’ I was very keen to go for a more Talking Heads approach. I love that New York post-punk scene.”

The most surprising number among the three is a grand reimagining of the classic ‘Unforgettable’. A clever cover, nicely played with: “The lyrics were written by Irving Gordon and famously recorded by Nat King Cole in 1951. Copyright lasts for 70 years…”

The timing couldn’t have been better. Out of copyright, it meant Simon could take the track and put his stamp on it: “It’s also a letter of apology to my ex-wife who did her best to support me during my worst times even after we separated.

“It’s a timeless, evocative classic and in my range. It just worked.” 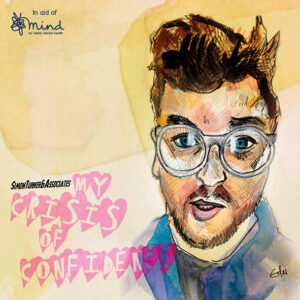 > The ‘My Crisis of Confidence’ EP is out now on Associate Records.
Make the connection: simonturnerassociates.bandcamp.com/releases