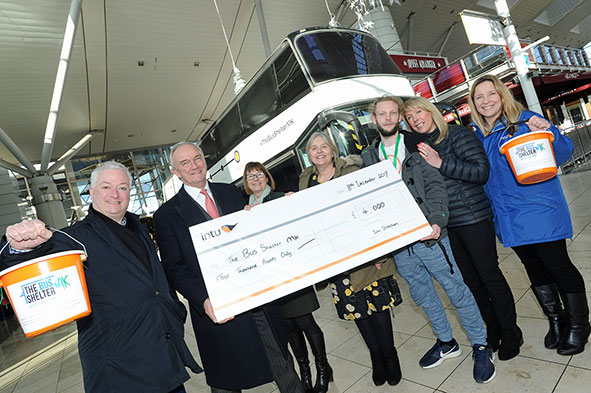 The founder of The Bus Shelter MK, Tom Davis, was given a cheque for £4,000 last week by intu’s chairman, John Strachan and Alexander Nicoll, corporate responsibility director.

Each year, all 14 intu shopping centres across the UK are invited to enter a charitable community initiative they have supported during the year, for the chance to win the ‘chairman’s prize’, with a top prize of £4,000. intu Milton Keynes entered The Bus Shelter MK, which the centre launched and helped by raising close to £60,000 to date. Everyone at intu Milton Keynes and The Bus Shelter MK were delighted to hear that their partnership had won the top prize.

John Strachan said, “All the entries this year were top class but the intu Milton Keynes submission about their partnership with Tom Davis and The Bus Shelter MK was the standout winner. Alexander Nicoll and I were very impressed by what Tom set out to achieve and proud that everyone at intu Milton Keynes contributed so much to make Tom’s vision a reality.”

John Strachan visited Milton Keynes to personally hand Tom Davis and Pam Williams, chairman of The Bus Shelter MK, the £4,000. Tom, formerly homeless himself said: “We are incredibly grateful to intu for this fantastic award and for John and Alexander coming to Milton Keynes to talk to us and understand what we’re trying to achieve, this is the perfect way to end a wonderful year.”

The Bus Shelter MK, an ex-touring double decker bus formerly used by Robbie Williams and Rod Stewart, will provide shelter and a means forwashing and cooking for the homeless. It will also offer advice and a path into employment by providing each person with a postcode that will help give homeless people in Milton Keynes a better chance in life and hope for the future. The Bus Shelter MK will open for use in early 2018.