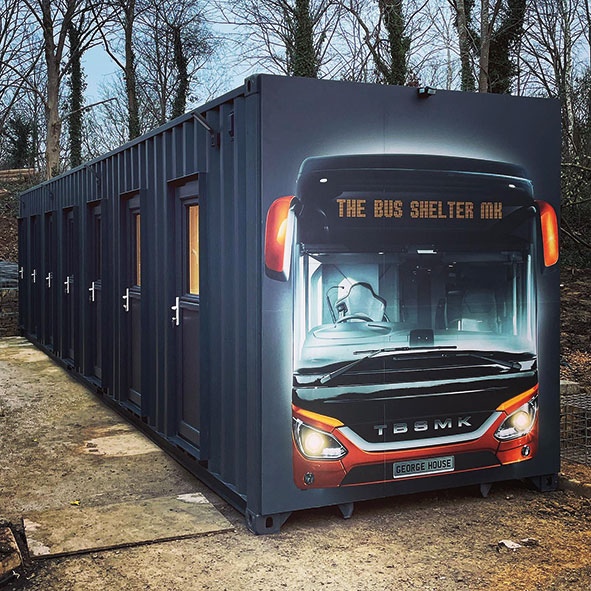 It began as something of a novel idea; to help homeless people off the streets and onto a converted double-decker bus. But with hard work and dedication the idea was realised, and since opening early in 2018

The Bus Shelter MK has offered more than 70 people a route out of homelessness, writes Sammy Jones.

Before catering for its Milton Keynes residents the bus was used by staging crews touring with stars including Robbie Williams, but after years of rock n roll road shenanigans, followed by its new life in MK, the brakes have been put on the bus itself; the charity has just moved to a new premises in Stantonbury, and the bus didn’t go along for the ride.

Covid regulations mean that communal sleeping in homeless shelters is no longer a safe option for guests, and the bus – approaching 40 years old – is showing signs of wear and tear. The old lady has been parked up for good.

The team at The Bus Shelter MK needed an alternative, and put their thinking caps on. What followed was a slice of genius!

A Covid secure pod has taken the place of the bus, offering seven bedrooms. The new premises has been created from a shipping container conversion, and made possible thanks to funding courtesy of the Masonic Charitable Trust and the John Apthorp Charity.

This splendid new unit has been built by Coventry-based company Doodle Build and, in a nod to the charity’s humble beginnings, the eye-catching graphic emblazoned across the front of the pod is of a tour bus.

“The guys that run the charity are literally superheroes; having full time jobs while still putting in up to 20 hours a week for free,” said Doodle Build owner Luke Jackson Miller, “I was approached to design the shelter over 18 months ago. What a fantastic idea, perfectly executed by the people in charge. It was an honour to be involved.”

The idea was brilliant, but realising it? That came with its own challenges.

“This has been a tough time to undertake such a mammoth project,” said Dave Pickering, vice chair of the charity, “and with our fundraising income down 86% this year due to Covid-19 we’ve really needed to keep costs as low as possible. Many generous suppliers offered special pricing and others provided their services for free, which has been crucial to get this project over the line. We are so thankful for all their support.”

And the move to the new base in Stantonbury wasn’t without issue: “We really struggled to find an alternative site to Campbell Park and feared we might have to close our invaluable service,” Dave said, “We were relieved and delighted when the Council offered us a long term lease on a redundant Landscaping Depot and The Parks Trust kindly leased us an adjoining tract of land to make the site viable.”

For many homeless people, the unconditional love of their canine friends is what sees them through the difficulties and they are understandably reluctant to part with their pals when accommodation is found. The Bus Shelter MK has previously offered on-site kennels for companions, but these new pods mean residents can keep their dogs by their side, as per the guidance given by The Dogs Trust – which is yappy news indeed.

The accommodation and site might be new, but otherwise it is business as usual – to provide shelter, food and support for its residents as they journey towards a life of independence away from the streets; things that you and I take for granted.

It’s sobering to think that five people have died on the streets in Milton Keynes in the last three years. The Bus Shelter MK is playing a valuable part to help prevent more loss.

“It has been, by far, the most rewarding job we have ever completed,” added Luke from Doodle Build, “Hopefully more councils will catch on now.”

The Bus Shelter MK’s achievements during its first three years of operation:

• 75 guests have enjoyed a safe place to sleep

• 250 more people have been assisted

• It has provided more than 6500 nights sleep for guests

• 6 dogs have stayed with their owners

• More than 200 volunteers have donated their time to the charity

• And there has been a mountain of washing!

For more information on the project, to volunteer, or to donate visit thebussheltermk.org