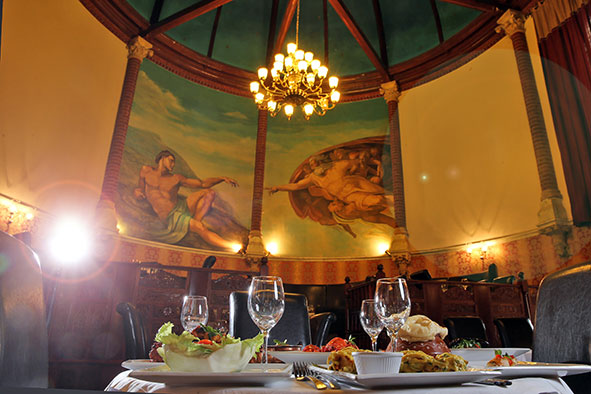 One of Milton Keynes’ award-winning restaurants, Calcutta Brasserie, is preparing for a refurbishment to create a new look and feel, part of which management are considering covering up the iconic “The Creation of Adam” mural, originally painted by the famous Michelangelo in the Sistine Chapel, Rome.

The mural has been part of the building’s history for 25 years when it first opened as the Moghul Palace, but as Calcutta Brasserie enters its 10th Anniversary in the beautiful 17th Century Grade II Listed Chapel, the manager is looking to refresh the restaurant, including potentially covering over the painting with another piece of art or large mirror.

Unsure of what to do and how to proceed with this decision, Calcutta is reaching out to its diners and the people of Milton Keynes for advice on Twitter and Facebook via a poll which will go like on Friday 23 February.  Should it stay, or should it go?

General Manager, Ali Ajmol said “Refurbishing the restaurant is something I have wanted to do for many months and with the 10th Anniversary in September of this year, we thought it would be the perfect opportunity to update the restaurant and add a little modernisation. The painting on the back wall is very striking and it is a feature which a lot of our diners, old and new, comment on. It’s a decision which we are unsure of, so we are turning to the public for their help!”

Other work to the restaurant will include painting the ceilings and walls, a brand new delicious menu, changing seating throughout, a deep clean and updating fittings and fixtures.

The Calcutta Brasserie 10th Anniversary will be celebrated in September and as with previous years, it is expected to be a spectacular evening filled with entertainment and delicious food which the whole family and plenty of friends can enjoy. Full details will be announced closer to the time via their social media and online.