In 2020 Solstice celebrated their four decade anniversary. All things considered, perhaps ‘celebrate’ wasn’t quite the right word, and it’s not like they hit the road for an extensive tour. That was out of the question, writes Sammy Jones. But they certainly marked the milestone well; against a backdrop of the global pandemic they recently released their spectacular sixth album, Sia.

Fans of the Milton Keynes-based prog players have had a while to wait – their last opus, Prophecy made it into record collections back in 2013, but this caboodle of beautifully crafted cleverness makes that lengthy wait in-between all the more worthwhile.

At the start of 2020 (back when buzz slogans like ‘hands, face, space’ and ‘play your part, stay apart’ had yet to be dreamed up by overpaid marketing bods) band founder Andy Glass started tinkering in the studio, and called in singer Jess Holland to record some vocals on a new version of a track called Cheyenne, which had originally appeared on the 1984 Solstice long-player, Silent Dance.

“I’d wanted to re-record it ever since that time, but never really had a vocalist who could nail it,” he said.

“It was a kind of audition with Jess, I suppose. We’ve worked together for a few years in Jenny Newman’s ceilidh big band and I knew she was a great musician, but until you try and work together in the studio you can never be sure how things will work out…

“Anyway, Jess was amazing, she totally immerses herself in the music and the songs.”

Work on what would become Sia gathered pace, and early vocals were laid down on a couple of tracks before the first lockdown changed everything.

But it didn’t stop studio play: “Luckily for Solstice, we all have recording setups at home, so when we were locked down I was writing and demoing tunes and sending them out for the band to do their thing with.

“It actually gave us time to really think about and record parts that just wouldn’t have been possible normally. Instead of two days in a studio to record drums, Pete would spend a week working out what he was going to play, trying different ideas before recording numerous different takes to send to me for editing. It was the same with Steven (keyboards), and boy did these guys come up with some incredible ideas and performances!” 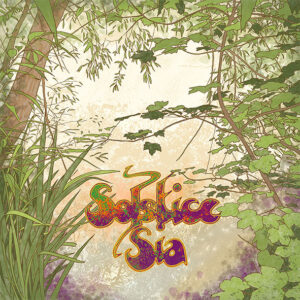 Andy is a master of the guitar – and his talent has been utilised by names including Jethro Tull, who took him on a tour of the UK and Stateside, and the late, great Bill Withers who Andy was thrilled to tour Europe with.

With Solstice, he has wowed at festivals including Glastonbury and Reading, and when he isn’t shining up material with his own band, you’ll catch him inspiring others; he is the manager of the Milton Keynes Rock School, and has been teaching guitar there for two decades.

With school out, and an album worth of material needed, Andy and Jess made use of the technology at their fingertips, sending tracks back and forward and creating the soundscapes that have been colouring up the Pulse office stereo in recent weeks.

“Jess has brought so much to the table in terms of ideas and interpretations of my vocal melodies, not to mention the stunning harmonies that she built around the songs – it’s just beautiful.”

When all the parts were back with Andy, he was able to put his full focus on the production and the mix – in a rare bit of positivity to come from being stuck at home, covid actually allowed him a luxury that would otherwise never have happened.

“I’d waited 40 years for an opportunity like that, it would have taken a major record deal in another world,” he admits.

Placing Sia in the stereo and pressing ‘play’ envelops the listener in a warmth completely at odds with the dull grey of winter outside the window. It’s a stunning delivery full of mood and lush layers; one of truly epic guitar parts and of sometime trance-like vocals with Jess embracing her role in the ranks. Melody rules throughout Sia, and everyone delivers the good stuff, so pointing out one exceptional player in the sextet is pretty pointless.

The Solstice faithful clearly agree, and the response, by both critics and fans, has been a universal thumbs up.

“We are humbled by the response, this album really does seem to resonate with people and I couldn’t be happier,” Andy smiled, “The support has been truly inspiring.”

So much so that the band promises that more music will be on its way to our ears imminently: “We’re working on content to support the album right now and have a bunch of great shows lined up for 2021, fingers crossed!” Andy added.

Tap to FB @solsticeprog for more.