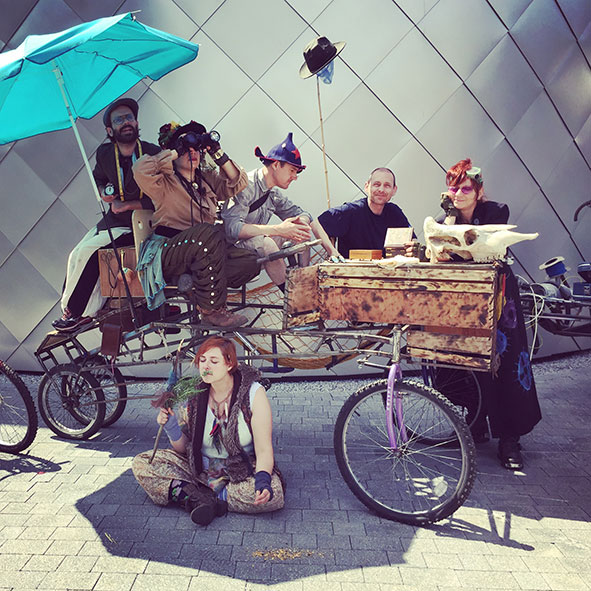 Milton Keynes really comes to life in the summer, the city is at its greenest and each weekend is crammed with festivals and events – and this year there’s more than ever before. Clear your calendars because it’s going to be a busy one. If you think nothing ever happens in Milton Keynes, just carry on reading – you’ll be amazed!

7 – 14 July – MK Festival of Nature – As a garden city, Milton Keynes has a wealth of nature and The Parks Trust, the Berkshire, Buckinghamshire and Oxfordshire Wildlife Trust, and the MK Natural History Society have formed the dream team to put together a week of nature events in MK. Download the programme here.

12 – 19 July – MK Festival Fringe – It’s like the Edinburgh Fringe but a bit smaller and not as far away- simple! See what this vibrant arts festival has in store for MK here.

14 July – Pedalling Culture: Redway Rendezvous – A Vagabond Event in partnership with Pedalling Culture and MK Festival Fringe. Trail behind a CINEMA BIKE (oh yes!) on your own bike, or bring your running legs, for a completely different ride. Cycle along MK’s redways and pick a good spot for the regular stops where a short film will be played. Want to know more? Here you go.

17, 18, 19 July – Pedalling Culture: Peddlers Pack – Jessica Rost & co’s Peddlers Pack are an odd bunch and they’ll be out on their peculiar steam-punk bikes meeting you – the public! Follow their route here.

20 – 29 July – International Festival Milton Keynes. It really needs no introduction; IF Milton Keynes is a local gem with a mix of free and ticketed events to be enjoyed over 10 days by all ages and interests. Don’t miss the Festival’s free opening night parade of supersize mini beast creepy-crawling through the streets of Central MK. The full programme can be found here.

22 July – Bicycle Bell-ero – Bicycle bells become musical instruments in this brand new short piece of music.  These specially tuned bells will be played as cyclists travel the Redways around Campbell Park, culminating in a performance at The MK Rose. Find out more here.

26 – 29 July – Vagabond Film Festival – Independent Cinema will be out and about showcasing film classics around MK – including The Greatest Showman Singalong at 12th Street on 28 July! All the details can be found here.

26 July – 6 August – Floating Cinema MK – Instead of being on a bike, this cinema is on a barge! Celebrating MK’s stretch of the Grand Union Canal the Floating Cinema will be showing family films, including the Gruffalo, a Wizard of Oz sing-along, Wind in the Willows, and A Town Called Panic, documentaries, and more. The full list of screenings will be published here.

22 July – Guided walk around Olney – The Cowper and Newton museum invites you to discover 18th century Olney on foot with a guided walk.

29 July – The Parks Trust’s World picnic – It’s back for another year! Celebrate the culture and tasty foods of the world without even getting on a plane. Find out more here.

Need a summer project? Tracing the Pathway are in residency at Milton Keynes Arts Centre until September – if you consider yourself an artist or creative entity, head down to be part of the hive mind, start a discussion, create something new or get your head down in a creative space.

We weren’t kidding – and this is just July, there’s even more happening next month so keep an eye out on Facebook and Twitter – @CultureMK

This year all of these amazing events are entwining together under Sharing Culture MK. A collaborative events programme in celebration of MK’s cultural heritage, new town stories and European connections – and what a year for it. In fact, we’ve got such an impressive programme that the European Year of Cultural Heritage has even featured Milton Keynes on their website! Pedalling Culture is another fantastic programme linking sustainable travel with MK’s cultural offerings.  You can find out more about it here.