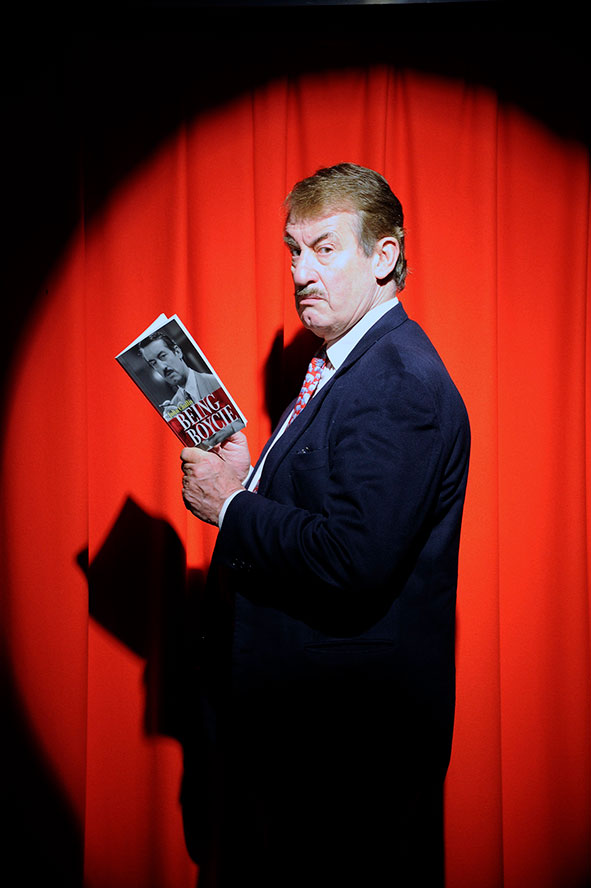 He’s one of the nation’s best-loved comedy characters. TV star John Challis is best known for his role as Boycie in BBC’s Only Fools And Horses – and in recent years he has returned to the screen to play Captain Peacock in BBC’s Are You Being Served and Monty in ITV’s smash hit comedy Benidorm. Now he plans to reveal the secrets of what goes on behind the scenes when he hits the road with Only Fools And Boycie. Fans can look forward to an intimate evening, during which Mr Challis will talk about his relationships with Only Fools stars like David Jason and Nicholas Lyndhurst. He will also talk about his work in other TV shows, like Dr Who and Coronation Street, as well as revealing how he turned down The Beatles during the swinging sixties after they asked him to star in The Magical Mystery Tour. John will meet fans afterwards in a post-show meet’n’greet to pose for selfies and sign autographs.

What can your fans expect from your show?

They can expect plenty of laughter. Ahahahahaha. After all, that’s what Boycie is best known for. I love meeting fans when I’m out on the road and Only Fools and Horses remains one of the most popular shows of all time. It was back on our screens on Christmas Day and it’s never gone out of fashion. People will get the lowdown on the show; I’ll be taking them behind the scenes and talking through some of the most famous episodes. I’ll also reveal a few surprises from my 50+years in showbusiness, like the time I turned down The Beatles after they’d asked me to appear in one of their films. And do you know, I still regret that to this day. There’ll be an audience Q&A and a meet’n’greet aftewards, during which I’ll sign autographs, meet fans and pose for selfies.

Do you find it hard to write new material or does it come easy for you?

I’ve got a lifetime’s worth of material to choose from. So many things have happened in my life that it’s never difficult to pick up a funny anecdote. I shared Marlon Brando’s dressing room when I was touring a play in America, I drank with George Best when he was the country’s most famous footballer and I watched in horror as Oliver Reed smashed up a hotel room. And that’s before we even get to Only Fools and Horses. I’ve lived a remarkable life and it’s a real thrill to be able to share some of my stories with fans.

Do you have any influences when it comes to comedy? Who are the greats in your opinion?

I still follow comedy and I keep an eye on what’s going on. I like Miranda, for instance, and Mrs Browns Boys also gets my vote of approval. I suppose the people I looked up to most were the comics from The Goon Show. I could do all of the voices. That’s how I got started. I used to imitate people, I was a natural mimic. I wasn’t the brightest kid in the class, but I was the one who could make people laugh.

Do you ever think you’ll team up again with other cast members from Only Fools and Horses?

We see one another quite often. We were a huge gang and we all got along. Of course, quite a few of the cast are no longer with us. Our writer, John Sullivan, has also passed away. Recently, we lost Roger Lloyd Pack, who played Trigger. I had been speaking with him a day or so before, so it was a huge shock. We continue to see one another at conventions and so on, but I don’t think there’ll be another series. You never say never, but I don’t think it’s likely.

Why do you think the character of Boycie has endured for so long?

Boycie is still popular because people had sympathy for him. They realised he was wheeling and dealing to try and make something better. I think people identified with that. Of course, he found himself in hilarious situations and they made people laugh. John Sullivan was one of the best writers of all time and he created extraordinary characters. But John always used to tell us actors that we’d brought them to life.

What are your plans for the future?

I’m incredibly busy. I’ve been working for 50 years in showbusiness and I’m busier than ever. I’m doing 18 dates of my show this autumn and I’ve just spent three months in Spain filming the new series of Benidorm, for ITV, which people seem to really love. I’m working on short film projects and there are plenty of other irons in the fire. But I’m looking forward to being on the road this spring so that I can meet fans and celebrate Only Fools and Horses with them.