Sean Grant & The Wolfgang are back in business with the release of the sophomore album, 33. Since its release a few weeks ago, it has been all guns blazing, and yet this effort could so very easily never have made it to fruition, writes Sammy Jones.

In 2018, the collective built on the buzz afforded by their 7 Deadly 7 EP with the debut album, The Shadows Are Lengthening, through the hip Fierce Panda label. Things were great, or so the band’s protagonist believed.

But by the start of 2020, the mood was more sombre. Sean wasn’t in a good place.

Thankfully the Milton Keynes-based artist took action – he quit alcohol for six months, went vegan, and embraced meditation and mindfulness in his battle to change his life for the better.

“It was actually before the the first lockdown that I decided to cut out drinking for a while,” Sean told Pulse Music, “I had just been doing the same things for so long with regards to dj-ing and the ‘band lifestyle’ and realised I had slowly started to do more of the drinking, or staying out later and later to try and get the same feeling as before and it had become more malicious…insomnia was a huge byproduct from the lifestyle and my mental health was at its worst.”

The realisation that things were taking a dark turn was the wake-up call he needed.

“I was at the end of my tether where I honestly felt ‘if I don’t do something to dramatically change my life I’m going to kill myself’. That thought scared me into realising how bad I’d let myself get and I finally took ownership over my mental and physical well-being.”

When Sean was at his lowest ebb, music didn’t feature. It wasn’t until making huge strides on his road to recovery that he began putting down the sounds and lyrics that would add up to 33.

“When I started this whole journey of recovery, music was honestly the last thing on my mind and I didn’t know if I would make music again, particularly Wolfgang material because it has, and most probably always will be such a personal diary for myself. Sometimes I guess it’s too painful to look at what you’ve written,” he admitted.

“I had to get back to why I would want to write again and simply it’s because I enjoy pure creation from source; it’s almost like getting back to the kid that picked up a guitar for the first time at 13 and just wanted to play, write and sing, with no goals again.

“Lyrically I always write what’s on my mind, be it what I’m going through, or what I’ve been absorbing recently. Once you start picking apart the lyrics and the overall soundscape of this album you can hear it everywhere,” he says, explaining the demons that he has beaten.

In the past, SG&TW had acted as an ambassador for the charity CALM, a leading movement against suicide. This album, as with the debut, is released in support of the organisation.

“Having lost two friends in as many years to suicide and having had my own experience with it, it felt right to release this album in support of their cause…”

Another noticeable difference with the new opus is that Sean Grant & The Wolfgang is just Sean – there was no Wolfgang in the studio; he played all instruments and it was self-recorded: “It feels like this is truly my painting, and the very talented Nick Fisher helped me to put the finishing touches to it.

“I’m still very proud of the debut album, but that feels like a painting from many hands, not just my own.

“In some places it’s different and better than I could have ever imagined, in some places I’m still not comfortable with it,” he admits, “This album feels like my best and truest work.”

Taking it into the live space is now the plan, and after the silence enforced by lockdown, we need live music like never before. A largely new band will join Sean on the road with a string of dates slated for later in the year.

But whether delivered live or on disc, fans of the debut release will definitely find favour with this new material; the same trademark melancholy writing has returned.

“33 is a crossover of struggles with mental health, religious and scientific views, yogic philosophies, ancient civilisations, the Bible, and quantum physics,” Sean says, summing up his latest handiwork, “33 is straight from the heart and carries a message that has powerful connotations of self discovery, paths to enlightenment – plus the mysteries of the number 33.”

Naked Next Door are evolving into a taut live proposition, and the MK indie-rock beasts return to the Craufurd Arms on Friday, July 2 so that you can see – and hear – for yourselves.

The recent single, Thin Line is available on the usual streaming platforms, and the quartet are celebrating inking a deal with the Marshall Live Agency – they’ll be heading out on their first tour of the UK in the spring of next year.

Tickets are £6 in advance for the Friday night feast.

Led by Lanterns, who bring together a rather unusual partnership of heavy riffs with catchy boy band inspired vocal hooks, will play on July 16, with support from Thousand Thoughts.

LbL will issue their debut album later this year.

Black Spiders (above) wove a wonderful web around the UK rock scene before downing tools, unplugging the amps and calling time on their raucous rock n’ roll.

The fans were bereft, but it seems like the band members missed the roar too – four years on and Sheffield’s finest are back in play, and will soon be heading this way.

Ironically, it was when the pandemic had ground the world to a halt, that the Northern ‘erberts decided to get back in the saddle, and they crafted a 13 track elpee loaded with high-energy, feel-good rock n’ roll.

The album is titled Black Spiders. Because they used all the ideas up during the recording process?

Frontman Pete Spiby says not: “It wasn’t hard picking a title for the album, as we decided that the focus should be on the band, not the album title, so we decided not to have one. Let the music do the talking…”

The band have booked five dates for July, including a welcome return to The Craufurd Arms on Saturday, July 24. Tickets are £13.

> MK’s forest of fools will make their return to MK11 in Kiln Farm on July 9.

Superb musicianship blended with an ‘anything goes so long as it’s cool’ vibe. The only thing these players promise is ‘a true musical odyssey for the 21st century.’

Things are picking up pace nicely on the gig front, and MK’s own Casket Feeder are buzzing, having been added to the billing of this year’s Bloodstock Festival at Catton Park in Derbyshire.

“We are incredibly honoured to be playing this year’s Bloodstock,” frontman Matt Downes told Pulse, “We’ve understandably not been able to play live throughout the pandemic, so for one of our first shows back to be at Bloodstock is just incredible.

“We hit the New Blood stage on the Thursday and will be promoting our debut album, Servants of Violence,” Matt added.

The album will be a follow-up to the bands’ critically acclaimed Scalps EP. If brutality, rage and power in your music make you happy, Casket Feeder is definitely worth investigating.

Servants of Violence will be out later this summer.

Stay in touch on FB: @casketfeeder

Also playing the Thursday, over on the Sophie Lancaster stage, will be fellow MK mob Hacktivist, who have just released their new album, Hyperdialect. You can read much more about that in May’s edition of Pulse.

From the archive: End of the Road for Quo

On July 21 1984 Status Quo played The National Bowl, with support from Marillion, Nazareth and Jason & the Scorchers. The date was part of their End Of The Road tour, and billed as ‘The Farewell Concert’.

“…there was this mirror in the dressing room, which we found out afterwards had a camera behind it,” frontman Francis Rossi remembers, “We’ve never actually located the film since, but various people are in there changing and cleaning their noses, and there are various people’s wives checking their underwear and all sorts in front of the mirror…” 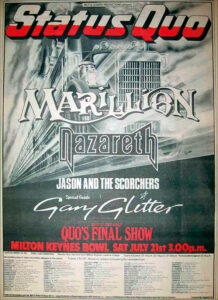 Jason Ringenberg, frontman with Jason and the Scorchers remembers the day well, too: “When we took the stage, I noticed all of Quo’s equipment was covered in plastic and it didn’t look like rain…we didn’t know at the time, but Quo fans had a tradition of completely stoning the openers with the vilest garbage they could sneak in. As soon as we started our set, the trash rained down on us like a summer thunderstorm.”