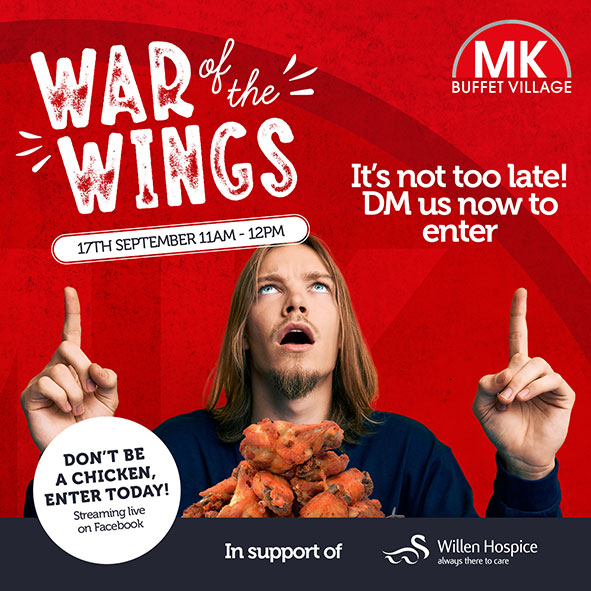 Twelve brave challengers from twelve MK businesses will be stepping up to the plate this coming Friday to take part in War of the Wings, an epic chicken wing eating contest to raise money for local charity Willen Hospice.

The dozen plucky contenders will be going all-out to see who can devour as many chicken wings as they can in heated rounds, at the epic battle which takes place at MK Buffet Village from 11am to 2pm on Friday 17th September.

Among the local businesses vying to prove they’ve got the stomach for the challenge are MK’s WAC Agency, Fierce Gym, Astrum Construction, FuseMetrix, Taylor Walsh, Aqua Parks and Peel Juice Bar. Each will be fielding contestants keen to show they’ve got what it takes and be crowned Chicken King or Queen.

Organiser Steven Dryden-Hall from WAC Agency says “We’ve thrown down the gauntlet and challenged the brave and hopefully hungry contenders to take part in a challenge that will stretch their stamina as well as their stomachs.  Each will be aiming to chomp down on as many chicken or vegan wings as they can in the allotted time, in a bid to be crowned victor.

“Although it’s a bit of fun, there is a serious aim to the challenge; we have set ourselves the goal of raising over £1,000 for Willen Hospice, to support the fantastic work they do.  Every business is committed to raising as much as they can to help MK’s only adult care hospice continue providing its specialist care.

“With a little over three days to go before the challenge, there’s still time to enter War of the Wings,” adds Steven. “So if you think you’ve got what it takes and want to help a great local cause, don’t be a chicken – sign up today at https://www.mkbuffetvillage.co.uk/war-of-the-wings