One of the biggest Christmas traditions for many is a family trip to the annual pantomime. Its cancellation in 2020 has snatched away the seasonal magic, and venues up and down the country have lost out on their biggest cash injection of the year. 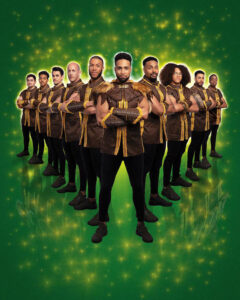 Milton Keynes Theatre should have been enjoying slapstick shenanigans with Ashley Banjo and the boys from Diversity this December, but Jack and the Beanstalk has been postponed. Luckily the venue has announced a smaller, ‘covid safe’ show this year, but we need more!

To raise some festive cheer, self-confessed panto addict Sammy Jones looks back at the merriment (and occasional mayhem) that the theatre has given us over the past 20 years…

Milton Keynes Theatre opened its doors in 1999 and Paul Nicholas, Linda Robson and Paul Barber were cast in panto number one; Peter Pan.

Since then, we’ve had a parade of Hollywood A-listers, soap stars and entertainers working hard to earn our giggles.

In 2000, Goldilocks and the Three Bears packed a punch when it brought Frank Bruno to town, and 2001 saw Bobby Davro joined by Melinda Messenger and the nation’s favourite letter deliverer Postman Pat for the first class production, Cinderella.

Steve McFadden left Phil Mitchell in Albert Square and made his way here for 2004’s run of Peter Pan (who remembers the tabloid stories of him sleeping in his caravan in the theatre car park?), and Snow White saw a stellar cast of stage and screen; Toyah and Suzanne Shaw joined Rocky Horror Show creator Richard O’Brien and Warwick Davies in the main billing.

Bradley Walsh rocked up in 2006 for Cinderella and loved it so much he returned a year later, this time writing, directing and starring in Aladdin. His performances are still widely considered to be among the best ever aired in MK.

When Henry Winkler took the lead in Peter Pan it was happy days all round in town; it’s not often you get to welcome The Fonz to MK9!

The Hollywood connection escalated in 2009 when Mickey Rooney starred as Baron Hardup. 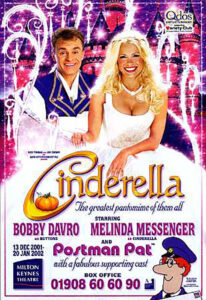 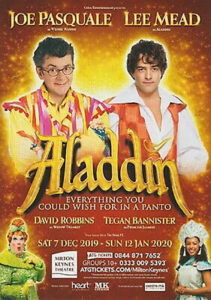 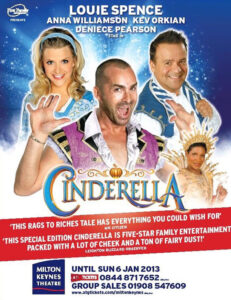 Mickey’s career spanned nine decades, and more than 300 films. Between 1939 and 1941 he was the highest ranking box office star in the world, and now he was starring in panto in the new town. It most certainly wasn’t his best performance, but it was memorable – an inebriated Amy Winehouse disrupted one showing (which also starred Anthea Turner and Bobby Davro) before assaulting the front-of-house manager.

The national media descended on MK Magistrates Court a month later where Amy admitted assault, and was given a two-year conditional discharge and made to pay £85 in costs and £100 in compensation.

When Dick Whittington returned in 2010, it was with Britain’s Got Talent favourites Stavros Flatley, and Gavin & Stacey’s Joanna Page. Taking the role of the Evil Rat was Dirk Benedict from The A-Team. How cool was that?

Russell Grant and Gareth Gates made a perfect pairing in Aladdin in 2011, and in 2012 Louie Spence was joined by 80’s pop star Denise Pearson (remember Five Star?) for Cinderella.

Warwick Davies was back in 2013 alongside Jennifer Ellison, and Bradley Walsh made a welcome return in 2014. 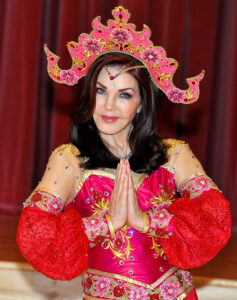 The former wife of Elvis Presley and one time mother-in-law to Michael Jackson talked to me about her battle to keep control of Graceland, her role in panto and the press intrusion which follows her everywhere during a brief, but insightful interview: “It is aggravating, there is no doubt,” she said, “They are very intrusive, mean hearted and cruel and they look for the worst. They want a story and if you don’t give them one, they make one up. There is some evil in that. It’s creepy,” she said.

When Stacey Soloman made her panto debut a year later, the Loose Women panellist was snapped using a clipboard on stage, the pictures sold to the tabloids and she was accused of not learning her lines. Actually though, she did a sterling job.

In recent years we’ve had a succession of class comedy acts providing pantomime perfection; Gok Wan and Brian Conley were a dream team in Cinderella in 2017, followed by Shane Richie in 2018 and Joe Pasquale and Lee Mead in Aladdin in 2019. We laughed ‘til our faces hurt!

Panto saved by a kiss

Panto in 2020 will now be a very different beast and a much-smaller affair, but it is hoped that the seasonal silliness will return on a grand scale in December 2021; and Diversity have confirmed they’ll still be heading up the fun.

We’ll be champing at the bit for a raucous, tinsel-heavy Christmas night out, and Jack and the Beanstalk will undoubtedly be a GIANT success.

With Jack and the Beanstalk off the menu in 2020, MK Theatre has announced a last minute replacement – socially-distanced performances of Sleeping Beauty will be hosted at the venue between December 19, 2020 and January 10, 2021.

Qdos entertainment promises comedy routines, audience-safe participation and all the unmissable magic audiences have come to expect from the delivery.

Lee Mead spent last Christmas in panto here, and returns this year in the role of Prince. Hear’say singer turned actress Suzanne Shaw also makes her long-overdue return to the MK stage. She will star as The Enchantress.

Comedian and magician Pete Firman is Muddles, and comedy aces Allan Stewart and Andy Gray – who usually entertain north of the border – will appear as King and Queen, and every good panto needs a great baddie and Claire Sweeney will become the evil Carabosse.

Tickets for the first performance will be gifted to NHS workers and their families.

Maaya launches ‘drive thru’ as part of increased safety measures

Get ready for Christmas Jumper Day with intu Milton Keynes