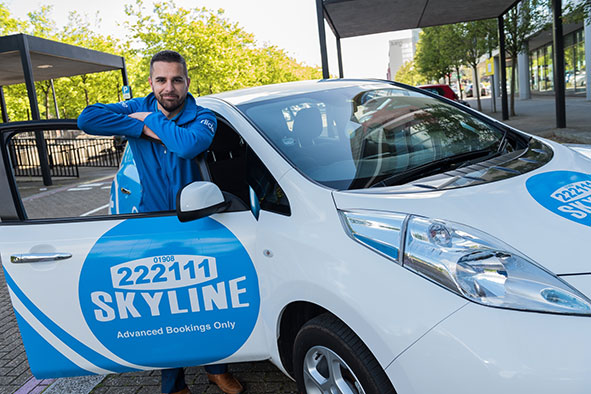 Skyline Taxis, a taxi firm with bases in Milton Keynes and Northampton, has invested in a fleet of electric vehicles (EVs) that are now in operation across Milton Keynes.

The growing fleet, which includes one Nissan Leaf and three Tesla cars, has been part-funded by the Government’s Plug-in Car Grant for low emission vehicles.

The move follows consultations with Milton Keynes Council and a pilot scheme in 2015, which saw Skyline trial a 24KW Nissan Leaf for a four-week period. Following the pilot, which was well-received by customers, it was decided to delay investing in a fleet until the 30KW model was released.

Gav Sokhi, Managing Director of Skyline Taxis, said: “Skyline has been at the forefront of the EV taxi market in Milton Keynes for the last few years and was the first taxi company to register an electric vehicle with Milton Keynes Council back in 2011. We have also consulted with the council on licensing policies and worked with Chargemaster on establishing charging point locations and advised where best to place them.

“Despite our 2015 pilot being well-received by customers and drivers, we took the decision to wait for the release of the 30 KW Leaf as less charges and a longer range would significantly improve the drivers experience and earnings. Customers will also notice how much quieter the taxis are, and we are looking to enhance the customer experience further by offering Wi-Fi in the taxis and payment by chip and PIN.

“We are excited to see our hard work and plans finally come to fruition.”

To find out more or enquire about booking an electric Skyline taxi, call 01908 222111 or visit www.skylinetaxis.co.uk.