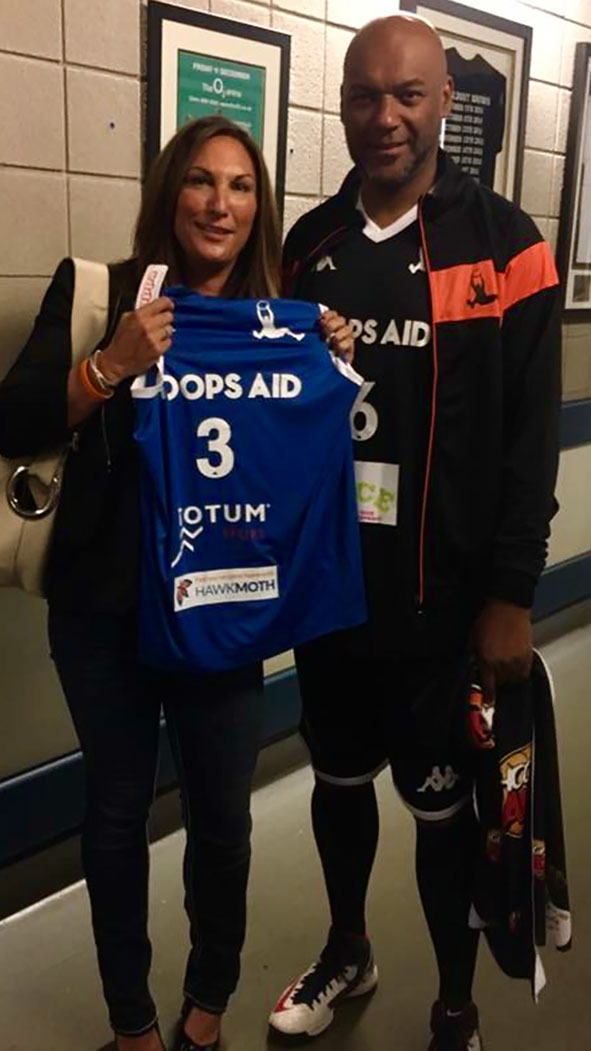 A fearless MK estate agent has skydived and tackled the Three Peaks Challenge in the name of fund-raising. Now she’s putting her best foot forward for a charity dance competition.

Not many people who claim to have two left feet would sign up for a Strictly Come Dancing style competition where they’ll be performing in front of their industry colleagues, but MK estate agent Kathryn Hunter is always up for a challenge.

Last year, Kathryn’s fund-raising activities saw her winning Best Individual Fundraiser at an annual ball hosted by property industry charity Agents Giving, who were so impressed with her commitment they asked her to join the board of Directors.

Without hesitation, Kathryn said yes – and immediately signed up for the charity’s ‘Strictly Agents Dancing’ competition, at which she’ll be paired up with a UK gold medallist dancer for the Agents Giving ball in December.

‘I don’t think, I just do,’ says Kathryn of Hawkmoth Property Consultants. ‘I’m the most uncoordinated person on the planet but I’m living in hope that I’m an undiscovered talent.’ In preparation for the nerve-wracking event, Kathryn will be taking dance lessons at the Wright Rhythm Dance School in Enfield, where she’ll be assessed before being allocated a partner. ‘He’ll definitely need to be good at leading,’ says Kathryn, who’s getting in some early practice with her fiancé for their wedding dance in May.

As for the dance style, Kathryn’s hoping for a spicy samba, in homage to her Brazilian grandmother. ‘To be honest, though, I’m just concentrating on raising money for the competition. I reckon people will pay good money to see me fall on my bottom so I’m hoping I’ll do really well with sponsorship.’

In the meantime, Kathryn is working on another role, as ambassador for Action4Youth, a charity that runs an outdoor adventure and learning centre in Caldecotte. ‘It’s a really cool and inspiring place where children and young people can go to do sailing, zorbing and climbing,’ says mum of two Kathryn. ‘I love that this gives them somewhere to go rather than hanging around on street corners or getting involved in gangs. When I visited, everyone was having such a great time and I heard so much laughter.’ Kathryn went on to say that Action4Youth are proud to have been chosen as official charity for one of the best cycling events in the UK. The Chiltern 100 Cycle Festival has a great range of rides for everyone, there is beautiful scenery, and is held at historic Penn House on Sunday 16th July 2017. There’s a vintage velo village, great food, live music and a wonderful family atmosphere.” I urge you all take part for just £1 per person to enter, it promises to be a great day” Kathryn beamed enthusiastically.

Hawkmoth were also proud sponsors of the Hoops Aid event help at the O2 on 14th May, founded and organised by Lance Haggeth OBE, where a whole host of celebrities came together to raise money for Sports Traider, the charity run by Lance and for cancer research. A great day was had by all and a very generous amount of money was raised to benefit these wonderful causes. “it was a pleasure to be able to contribute to such a worthwhile event” Kathryn added, “Though I do sometimes wonder how I fit it all in” she joked.

Kathryn is also getting involved in a food bank campaign in Milton Keynes. Part of a nationwide property industry initiative that begins in May, the idea is to encourage everyone to fill a food parcel to donate to a food bank. Kathryn has already been in touch with her local food bank and says she was shocked to hear how some people can’t pay for necessities like sanitary products.

‘We take so much of what we have for granted yet there are people in this country who can’t afford basic provisions,’ says Kathryn, who’ll be hosting a collection point at the Hawkmoth office so people can leave their food parcel donations. ‘I’ll be doing everything I can to get local agents involved and help with the campaign.’

Kathryn went on say that Industry Charity Agents Giving was supported by Rightmove, who offered grants to agents wishing to get involved, “not many agents are aware that Rightmove will offer a grant of up to £1000 for any event organised by those within the industry, the proceeds of which go to charity” says Kathryn, “that means there is no excuse not to get involved, I would urge people to encourage their local agent, I would even go as far as to say “challenge” their local agent to take part in a fundraising event” she added.

With Kathryn doing so much to help others, it’s good to hear that she’s been on the receiving end, too. Earlier this year she was given £10,000 worth of free software by Peter Grant the CEO of VTUK, an award-winning industry software developer and provider, who’d heard how Kathryn’s office had burned down when she first set up in business. ‘I was so touched to hear from him,’ says Kathryn. ‘He was also a fundraiser winner and wanted to do something to help me. I was even more humbled when he told me his wife battling cancer. For him to be so generous and thoughtful at such a difficult time was incredibly humbling and restores one’s faith in human nature.’