MK muso Alex Wesley has been a face about the place for ages – but now he’s taking the spotlight for his great sounding debut album. Sammy Jones found out more…

Plenty of scene players around town have met the acquaintance of Alex Wesley. He spent years enabling other performers to go live; hosting Newport Pagnell’s Sunset Lounge events for a long time, before heading to the other side of town and organising MK11’s jam night.

There were also brief dalliances at the Revolution Bar in Xscape and at The Craufurd Arms in Wolverton, taking charge of the open mic and jam spots.

And his own musicality saw him join the ranks of Brummie-based collective The Amateurs which led to dates with The Twang, The Guillemots and Eliza Doolittle.

Alex left his mark with the band, contributing to an album of material, but on the date of its release he was off on a solo musical adventure – playing in Denmark as part of a tour of Irish bars around Europe.

Singer-songwriter Alex was also part of a fluid musical operation called AKA, alongside drummer Kev Hickman and bassist Alex Preston.

Kev and Alex subsequently booked studio time to lay down a ‘two-piece’ rock EP, and played live shows as Killer And The Neon Farmboy, which would eventually mutate into another version of AKA.

“At that point AKA was myself, Kev Hickman and Aaron Spiers and we were playing everywhere and anywhere that would have us. We topped out at 257 gigs in a year, so we were busy boys!

“I wanted to incorporate more keyboards and have someone else come in and play more guitar, so it eventually grew into the band called Francis,” Alex told Pulse.

“I wanted to see how far I could push the envelope,” he said.

But then a text message from a pal saw Alex change direction again: “The text was from a friend who had arranged a residency at the Waldorf Astoria on the Palm in Dubai. I’ve had worse,” he quipped.

“We landed a residency playing at a bar called Lock Stock and Barrel, and won Time Out Dubai Magazine’s Best Bar Band Award in 2019.”

More good fortune followed: “A chance encounter led to a meeting with Universal who were very interested in releasing the EP we had worked on, and I followed that up in June 2019 with the single Fade Away.”

And then he flew back to these shores: “I kind of crash landed back in the UK and managed to throw a band together (with Dale Luke Parker, Jim Reece, Andy Hunt and Nathan Didby) and we put ourselves into the Lodge studio in Northampton last summer and tracked most of the album in a day.

“I managed to piece together what else needed to be done with a little help from Rise Bailey Rise, who also did an awesome remix of My Days Are Better With You… and I think the rest is lockdown!”

That flurry of activity has resulted in the warm and infuriatingly-catchy sounds that comprise the 10 track Francis elpee, ‘It’s Not What It Means To You, It’s What It Meant To Me’.

Alex said: “They say you have your whole life to write your first album and about six months to write your second. I got a record deal a little bit later in life so I was fortunate to already have the first album written, and a second and maybe a chunk of a third so I think I followed that particular bit of advice to the letter!”

The album is available in super smart vinyl, and it really is a tale of two sides in every way…

“‘It is a game of two halves with Side A being more acoustic and intentionally accessible – the sort of thing that isn’t going to upset my Grandma too much. Side B brings in more of the sounds I look for and closes with a band focused attempt at a more electronic sound in the forms of Trying To Hide and My Days Are Better With You.”

It’s a terrific debut and one that hopefully has a bit of something that many music fans will fancy: “I cut my teeth as a working musician, performing other people’s music alongside some of the greatest recorded tracks of all time. The point of that is to give the people what they want – I think this first album is more what they don’t know they want yet.

“There should really be something in there for everyone, and if there’s not, give me a minute for the second album or come down to a gig and let’s see if we can give you the night of your life.” 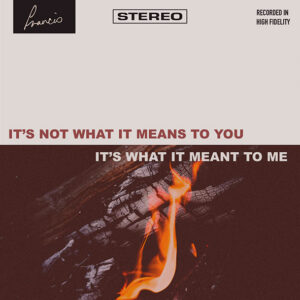 ‘It’s Not What It Means To You, It’s What It Meant To Me’ is available by clicking to: listentofrancis.com