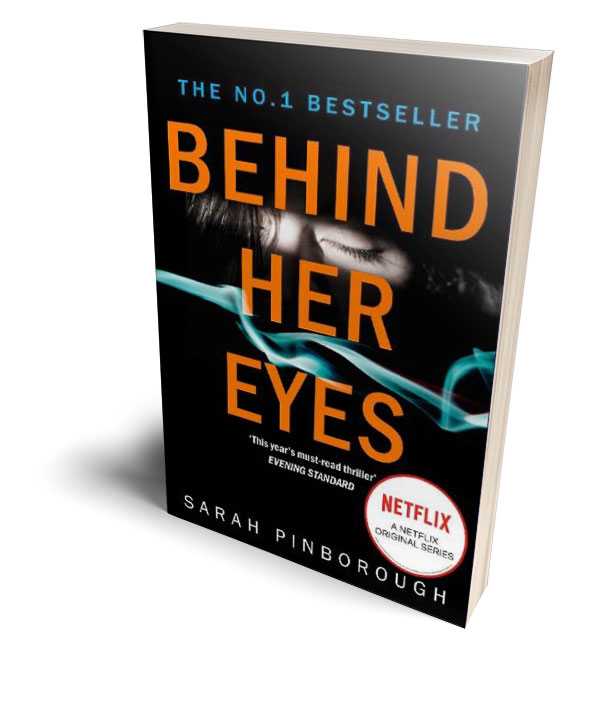 The television adaptation of Sarah Pinborough’s 2017 book Behind Her Eyes is currently thrilling viewers with its unexpected ending. The New York Times bestselling author responsible has spent lockdown with her rescue dog Ted, filling more pages with mystery and suspense from her home in Stony Stratford…

When we speak, Behind Her Eyes is the most watched show on Netflix globally and the No1 show in the UK, and Sarah is allowing herself to enjoy the success. But only a little.

“I do sometimes find myself smiling and I’m not usually a very self-congratulatory person, I am usually looking for the fault,” she admits, “Normally, I’m not very good at celebrating things; something happens and I’m like, ‘Ok, good, what’s happening next?’

“But the producer and I keep texting each other – it is the first show that she has run herself, so we really bonded and swap different articles and reports.

“It reminds me a little of when the book came out, because there was so much pressure around the book, but this is kind of bigger.

“It is so good to see people watching it in real time on twitter – some of them are going to hate it obviously, but the majority are ‘Oh my god, this is amazing, this has blown me away.’”

It’s true; the vast majority of viewers do love it, and the nation’s appetite for lockdown television has increased the interest. Social media is awash with people devouring the series, and being knocked sideways by the ending. But seeing as how Sarah has just raised the subject of negativity, let’s get that out of the way nice and early.

One broadsheet reviewer called the series ‘trash TV’: “…Oh that’s fine, that doesn’t bother me at all!” she says, “Trash TV is a really snobby phrase isn’t it? Because what that normally means is that people have been entertained by something, and just because it’s not necessarily deep and meaningful…” she pauses and restarts her point, “I really want to watch (Russell T Davies’ Channel 4 series) It’s a Sin, because I appreciate that it’s going to be really moving television and I was around in the 80s and it was a terrible time, but at the moment I don’t have the emotional capacity for what I think is going to come at the end of that show. I know that is going to devastate me.

“I want to watch things that are more art, heightened and tongue in cheek, and Behind Her Eyes does all of those things; it’s heightened, and it’s not supposed to be taken entirely seriously.

“When people say trash TV it tells me something more about them than it does about the show. It’s a love or hate ending, so I can deal with people hating it, it’s fine…”

Feedback from what Sarah calls those ‘real people’ has been hugely positive: “A lot of the reviewers have been quite snooty about it, but people on twitter have been great, and they are ‘real people’. I was walking my dog the other day and a woman wound down her car window and said ‘I’m really loving your show…’” she says, sounding rightly pleased about it.

There is plenty of action in the psychological thriller, which focuses on a single mother who enters a world of twisted mind games when she starts an affair with her psychiatrist boss – while simultaneously befriending his mysterious wife. But Stony Stratford-based Sarah celebrated the premiere of Behind Her Eyes in decidedly undramatic fashion, with her mum, her sister and a glass of champagne.

“My mum and sister live together and are in my bubble, so I went there, and I made them watch the whole thing. We started at about 4pm and then – this is how classy our celebrations were – we got a Deliveroo KFC bucket!” she announces with a laugh, “We thought it would be easy to eat while watching telly…”

Having ‘built’ the characters and created the story, how did it feel to then sit back and see your story come to life. Was the translation from your head to the television screen relatively faithful?

“It’s really weird, with this adaptation I wasn’t hands on involved, but I have got a really good relationship with the team at Left Bank who made it for Netflix.

“They did offer to show me scripts as they were coming up, but I didn’t want to see them because I thought that if I was adapting it, I wouldn’t want the author looking over my shoulder saying, ‘You are not doing that bit right’ and also, it’s not my job, because once you sell it they can do what they like with it. But I did go to the read through and I went on set and to me, they’ve done such a great job.

“With this, it’s so faithful that I feel like I can take all the good credit!

“The casting was great too, they are all amazing in their own way, and I can’t picture the characters without picturing those in the show now.”

Sarah is enjoying the positivity radiating from her lockdown smash-hit, but work never really stops for this author. She’s so busy that she struggled to remember how many books she’d written in another interview.

She laughs: “It’s more the fact that I can’t add up,” she admits, totting up the titles, “I’m finishing my 27th,” she promises.

Often, authors tell us that they treat their job as a 9-5, but Sarah bucks that trend: “Some people go to a shed or whatever, and I say, ‘Why would you do that?’ I think the whole point of being a full time writer is that you don’t have to go to an office for a certain amount of time a day.”

While she’s happy just to ‘sit down on the sofa with a cup of tea and a bag of crisps,’ by her own admission Sarah is something of a workaholic and writes seven days a week.

Downtime? In a ‘non-pandemic life’ she would head into London once a week for meetings and commitments and to visit friends, but she is happy enough to be wandering around Stony Stratford’s stores and diners too.

“I like pottering around the town, acting like an old lady popping into the charity shops and having a bit of a rummage – I can’t wait for them to open again, it has been so long! “Sunday would be lunch with friends; either a roast dinner or an Italian, or to go and sit outside French Affaire, just go to the pub. I’m not really a massive doer of things,” she says, “I don’t have a car, I didn’t have one in London and I haven’t driven for years now, because I don’t really see the point, the only times I’ve been up CMK are when I’ve been doing book events.

I’m literally in Stony or I get a train into London. I like Stony, and I’m happy with it.”

Currently, the former English teacher (“I did it for six years. Teaching is quite fun and I really liked the kids, although I hated the bureaucracy”) is juggling a number of exciting projects: “I’m finishing a book which will be out next year, I’ve written the adaptation of a book of mine called The Death House which will hopefully be filming next year, and there are a couple of TV things…”

And her mind is always bubbling with thoughts for future page-turners: “I think you train your brain to look for ideas,” she says, “It’s like any job – your brain starts to work that way and to look for things. I just like things that are a bit dark with a bit of a mystery. They don’t always have to be supernatural or have any weird in them, but I do like the idea of a puzzle.

“In general I’m a bit of a ditsy person,” Sarah admits, “All of my intelligence goes into my books and the rest of my life is just a mess!”