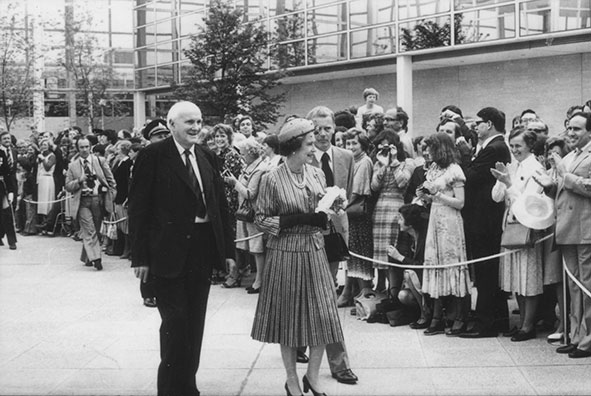 Our monarchs and their family members have made quite the impression in these parts over the centuries; some for more sinister reasons than others.

Royal visitors? Stony Stratford has had a few; King John stayed there in 1215 with his advisors, and spent time issuing writs and patents, and Eleanor of Castile also passed through on her final journey in 1290; the wife of King Edward I had succumbed to a slow fever and her body rested in the town overnight on her final journey to
Westminster Abbey.

The king announced that a memorial would be erected in every place the deceased queen and her entourage stayed en route to the capital.

Stony Stratford’s Eleanor Cross was destroyed in the Civil War, but a commemorative plaque at 157 High Street marks the spot where it once stood.

More than 700 years have since passed, and yet it remains a popular part of local history – and a 30ft mural new to the town recalls the event.

Richard II was present nearly a century later, followed by Henry IV in 1409 and Edward IV spent the night in 1464.

The story of ‘princes in the tower’ has long fascinated historians, but it was from the former Rose and Crown Inn that Richard of Gloucester had his nephew Edward V taken into protective custody and the young Edward eventually disappeared from view altogether…

Today, the drama is acknowledged by a plaque on the building: ‘This house was anciently the Rose & Crown Inn and here in 1483 Richard, Duke of Gloucester (Richard III), captured the uncrowned Boy King Edward V who was later murdered in the Tower of London.’

Henry VIII came to Stony Stratford a number of times. He left his mark too; when George Taylor was said to have spoken against the king he was made an example of. George denied any wrongdoing, and said that even if it was so, it would have been while he was inebriated.

Nonetheless, the diplomat and courtier Sir Francis Bryan wrote to Cromwell that Taylor should be tried by the king’s command and hanged, drawn and quartered – with those quarters set up in Aylesbury, Buckingham, Wycombe and Stony Stratford.

Poor Taylor’s guilt had already been decided pre-trial, and served as a stark warning for anyone else who may have a loose tongue.

Queen Elizabeth I visited Woburn Abbey in 1572, although the Earl of Bedford wasn’t said to be too thrilled by her stay. Writing to Elizabeth’s chief advisor William Cecil, 1st Lord Burleigh, ahead of her arrival he said: “I am now going to prepare for her Majesty’s coming to Woborne, which shall be done in the best and most hastiest manner that I can. I pray God, the Rowmes and Lodgings there may be to her Majesty’s contentacion for the tyme. If I could make them better upon suche a sodeyn, then would I, be assured, they should be better than they be.”

King Charles I attended Stony Stratford during the Civil War, and twice went to Woburn Abbey as a guest. But his third trip wasn’t nearly so leisurely; he was there as a prisoner of parliament.

In 1841, Queen Victoria and Prince Albert enjoyed the hospitality of the abbey as guests of the 7th Duke and his wife, Duchess Anna Maria.

Upon arrival they were greeted in the abbey grounds by a crowd believed to have been up to 10,000 strong.

The State Bedroom has been used by many visiting dignitaries, but is now widely known as Queen Victoria’s Bedroom, and contains some treasured physical mementos of their stay; etchings from the hands of Victoria and Albert.

The queen’s subjects turned out en masse to glimpse her during a planned journey through the town. Recalling the vast numbers who jostled for a view of their monarch, a newspaper report recorded that ‘Woburn presented such an appearance as we should think it has never presented before, it was almost impossible to get down the street, so very dense was the crowd.’

There was celebratory fun to mark this most special of visits, smile-inducing activities described as ‘rustic sports’ which included biscuit bolting (‘Ten boys to eat pennyworth each) and the announcement that ‘half a pound of best Scotch snuff will be given to the old lady who shall take half an ounce (clean snifting) in the shortest time.’

Some traditions are best left in the past!

An eyewitness account of a royal dinner party during her time here stated that ‘The queen was the most simply attired of all the ladies, she wore a black satin dress made very plain – nothing over her shoulders, and round her neck a plain black necklace united by a small black heart – her hair combed quite straight and a wreath of small white roses round her head; she looked very sweet – tho’ she is certainly a very plain person. The prince looked really beautiful, I think I never saw a young man look so interesting and handsome.’

The new railway town of Wolverton became home to the royal train, and later in her reign Queen Victoria would enjoy the surrounds of the Works Library and Reading Rooms on her journeys north.

One Newport Pagnell resident recalls being given the afternoon off school to see Princess Elizabeth pass through Wolverton on the Royal train: “It was the quickest of glimpses, though – just a quick flash!’ he said.

She also took time to visit Bletchley in 1966, and enjoyed a visit to the Tickford Works site of Aston Martin in Newport Pagnell where she was presented with a scale model of the world famous motor. When Prince Charles visited in 1988, he was presented with his own model.

In 1979, the Queen opened the council’s new civic offices. The shopping centre opened the same year and Garden Court with its famous fountain was renamed Queens Court to commemorate her visit.

Her sister, Princess Margaret was a family friend of jazz stars John Dankworth and Cleo Laine and when they extended their music venue The Stables in 1979, naturally the princess was on hand to declare the venture open. When a new, larger auditorium was opened in 2000, the princess reprised her earlier role and officially cut the ribbon on the new era.

She was a regular visitor to dinner parties held at the Dankworth family home, and John used to tell the story of how he once hid the princess in the back of his car to fool the press as she left the house!

In 1986, Princess Diana attended Willen Hospice before a flurry of media attention, and schools were granted time off to share in the occasion. This writer still remembers shaking her hand that day. Meeting a real life princess was quite an occasion, no matter how brief!

There have been many recent royal visits too; When the impressive Stadium MK was opened in 2007 Her Majesty returned to Bletchley to do the honours.

“It was one of the most special days of my life,” recalled MK Dons chairman and stadium founder Pete Winkelman, “It still feels like a surreal experience and I will never forget the performances of the Milton Keynes children and the Olympic style display they put on that day.”

“The roar of the crowd when the Queen stepped out was monumental and will stay with me forever,” he added, “It was a fantastic preview of everything that was to come at the stadium.”

In 2012, one of the most iconic names in music celebrated its half century and Princess Anne was on hand to mark the occasion at Marshall Amplification in Bletchley.

The princess was so taken with the facility that she broke with convention to make an unplanned speech to staff.

In 2017, Milton Keynes marked its half century, and Prince William helped the celebrations, visiting Campbell Park and unveiling a pillar commemorating the anniversary. In a speech to the assembled he said: “There is a very strong sense of community and belonging in Milton Keynes – a busy cultural, heritage and arts centre and a focus on greenery and sustainability.”

The Duchess of Cambridge has a personal attachment to Bletchley Park – her grandmother, and her grandmother’s twin sister both worked at the codebreaking site during World War Two.

She has made two trips to the park; in 2014 she visited following the sites’ extensive renovation, and in 2019 she returned to view a newly opened D-Day exhibition.

And Camilla, Duchess of Cornwall is patron of Medical Detection Dogs and spent time at the groundbreaking charity in September. Camilla’s visit was the first time a royal has ever worn a visor on an engagement here, a sign of the covid-19 times we are currently living in.

Fittingly, Camilla viewed the ongoing trials that aim to determine if dogs can be taught to detect the coronavirus.

Nowadays, a royal visit is a chance to dress up, practice your small curtsey or neck bow, wave a flag and possibly even get a selfie with one of those closest to the throne.

And how reassuring to know that today’s sovereign won’t issue an order that will send you to the gallows!