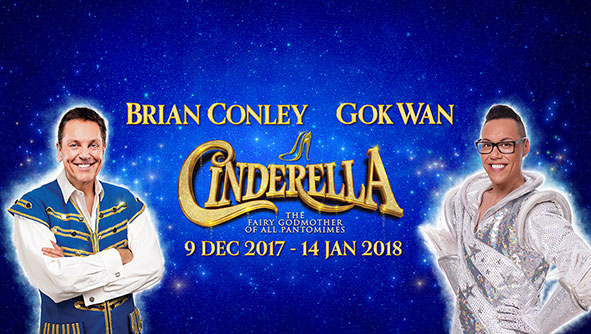 Gok Wan will play The Fairy Gokmother, offering helpful style tips to The Ugly Sisters and creating the most magical ball gown in panto-land for Cinderella! Cinderella in Milton Keynes marks Gok’s fifth pantomime appearance, the first of which was the subject of the Channel 4 documentary Gok Does Panto.

Gok’s TV career started with the overwhelming success of his Channel 4 series, How To Look Good Naked and through his expertise as a fashion stylist and the show’s phenomenal success he became an ‘institution for women wanting to find their own unique style and confidence’. How To Look Good Naked was so successful that Gok appeared in a further six series and then went on to host three series of Gok’s Fashion Fix. Gok’s other recent TV credits include How To Cook Chinese, Gok’s Style Secrets, Gok Live Stripping For Summer, Too Fat Too Young and Gok’s Teen’s The Naked Truth.  Gok is a regular guest presenter on ITV1’s This Morning and has most recently presented Fearne and Gok – Off the Rails for ITVBe and hosted ITV1’s Gok’s Lunchbox. Before panto, this autumn Gok will tour the UK in his own show Gok Wan – Naked & Baring All.

Cinderella sees pantomime producer Qdos Entertainment return to Milton Keynes theatre for the first time in over a decade. The Company’s managing director Michael Harrison said “I’m very excited that we are able to bring Brian and Gok back together on stage after their previous record-breaking panto seasons together in Southampton and Southend. The pair working together are comedy-gold and this show will definitely be a must-see on this year’s panto calendar.”

Emma Sullivan, Theatre Director at Milton Keynes Theatre says: “We’re thrilled to announce that Gok Wan will be strutting his stuff and working his wardrobe wonders as the Fairy Gokmother in pantomime this year alongside Brian Conley. Gok is everyone’s favourite fashion-guru who is sure to be loved by Milton Keynes audiences. This pantomime season promises to be magical… oh yes it does!”

Panto-favourite Brian Conley’s casting as Buttons was announced by the Theatre earlier this year in a production packed with spectacular special effects, stunning costumes, big musical numbers and lots of comedy for all the family.

Cinderella runs at Milton Keynes Theatre from Saturday 9 December 2017 until Sunday 14 January 2018. Tickets are on sale now at www.atgtickets.com/miltonkeynes.