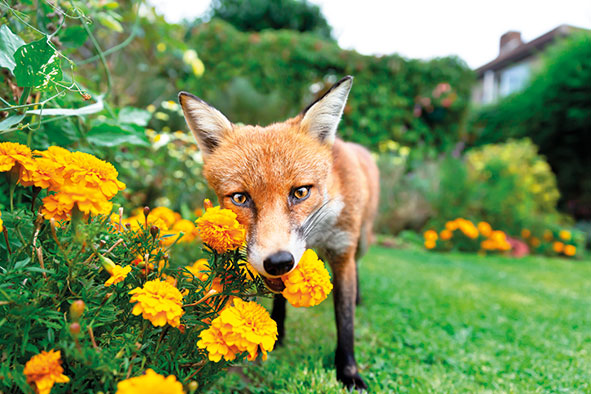 It used to be that you might catch a little flash of movement while driving late at night, or tragically see one on the side of the road, another victim of the motor car. But these days they are much more visible in our communities – and in Newport Pagnell foxes are stepping out in the sunshine, writes Sammy Jones.

Many residents say they are regular visitors to their gardens, and some come face to face with them while doing daytime chores. And a great deal more of us are used to their haunting screams that catch us unaware after dark.

These magnificent creatures have become quite the talking point among locals too: “They have been visiting us for around three years,” says Scott Humphries whose family have taken to feeding them.

“We’ve been giving them cheese, occasionally tinned dog food, cooked and raw meat and bones from Sunday lunches – but not chicken bones.

“Originally we had a large dog fox visit, but over the last 12 months he has brought the whole family – including a young pup. When the foxes come, the security lights are triggered, which sometimes makes them run away, but slowly they seem to be getting used to it.

“With humans encroaching more and more onto rural areas with new builds of housing and industry, I’m not surprised they are becoming more urban. I think they do get bad publicity sometimes though.”

On the town’s Facebook page, Newport Pagnell Chit Chat, residents often share images and videos of the bold visitors, and while the majority of comments are positive, there are always negative reactions too; not everyone wants a vixen and her cubs using their garden as a playing field. Some people have concerns about their own animals being put in danger by foxes; some felines are now being kept indoors, and there have been incidents of pet rabbits and chickens meeting a nasty end.

Bunnies and hens are a natural food source for foxes, but of course losing much loved pets in such a way is very distressing.

Ultimately though, these bushy-tailed majestic animals get a bad press. We’ve all read the stories about attacks on children, but fox attacks are incredibly rare – attacks by dogs are far more common. And there are more than 10 million pet pooches in the UK, but we don’t spread fear about them every day, do we?

Foxes can live for around 12 to 15 years, but sadly, in urban settings the average lifespan is between two and three years. Tragically, half of foxes in the UK succumb to the perils of the road, and the vast majority of cubs die before they are old enough to breed.

> The fox is a member of the dog family

> Their latin name is ‘Vulpes Vulpes’

> They will eat almost anything – including berries, worms, spiders and even jam          sandwiches!

People who call them vermin are absolutely wrong – legally they have never been classified as such.

But if foxes aren’t for you, is there much you can do to deter them? 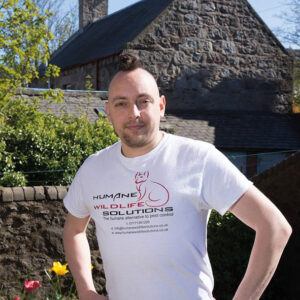 The company works countrywide and internationally to provide help to deal with many different species – not just foxes.

In the week that we speak with him, Kevin has received two enquiries from residents in Milton Keynes. He says that education, not eradication, is the way forward, and that we can all learn to appreciate these stunning wild animals.

“We believe that we can all live side by side,” says Kevin, “We can help you overcome wildlife conflict on your properties by repelling and deterring rather than the current methods offered by pest control services of trapping and killing.”

What’s the problem with foxes, then?

“That people don’t understand them, and that causes fear. Being our largest urban mammal, people are unnerved when they are in their gardens. By explaining that they will not cause you or your family harm, and that they are fascinating to watch can really help to remove those fears, which I do understand; having a mammal on your property that you have no control over can be scary, but they won’t harm you – and I’ve spent many years working up close with them.”

Kevin says that deterring them from gardens isn’t difficult, but if they’ve already set up home in yours, they can be encouraged to move on – with no loss of life necessary.

“It’s very easy; whether it’s preventing them from hopping over a fence or fouling in your garden – both can be resolved easily,” Kevin promises, “It is best to leave things to the professionals as it requires a more hands on approach. But don’t worry – we’re here to help.”

And there really is no need to worry about your pet moggy getting into a spat with a fox.

“It’s not usually an issue – and nine out of 10 times it’s the cat that will chase the fox out of the garden,” says Kevin, “During March and April, foxes are more apparent as they select their dens and enjoy the nicer weather, and this is when owners are usually concerned. But the cats will know about the foxes in their neighbourhood a long time before cat owners do!”

The new tale of the fox and the hound 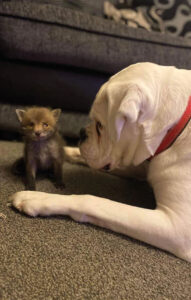 One lady made an unexpected discovery when she got down to some gardening during the Easter Bank Holiday and found six three-week old fox cubs peeking out from under some decking!

Nickie Pearson runs Luton Wildlife Rescue and was called upon to take in the fluffy bundles, and it soon became clear that one of the cubs wasn’t doing so well: “He was the runt of the litter, only had one eye and was very underweight…” Nickie said, “In the wild, his mother would have killed him, or left him behind when she moved on with her healthier cubs.”

Instead, this ridiculously cute baby found a temporary home with Nickie and her daughter, who named him Harley.

He also found some new playmates; Nickie shares her abode with a menagerie of animals and birds, including a dog, five parrots, a tortoise and several pigeons.

Harley quickly hit it off with an Amazon parrot, and the family pooch, a handsome Boxer called Casper.

The fox and the hound have become firm buddies. 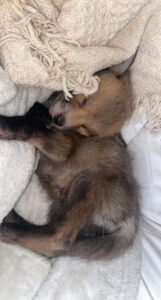 “Harley has all the usual fox traits, and when he howls the dog will go and give him a little push. “They play together and have great fun for half an hour or so before Harley goes and finds his heated dog bed and falls asleep!”

Nickie says talk of foxes being pests is simply not true: “The public need to read up on them. They aren’t vermin and they don’t carry disease,” she promises, “The reason they are coming into towns is because we are building on their land and destroying their dens – that’s why they are being found under sheds and decking, they feel safer there. Culling them is definitely not the way forward. If anything, DEFRA should bring in a law to spay the females and control the population.”

As for Harley’s future? He is tame enough to stay where he is, but it’s not practical to have a fox in the home (and anyone whose canine pal has discovered the delights of fox poo on a walk will know they aren’t always very fragrant!).

So, while his newly adopted family will miss him desperately, they are sending the little beauty to a fabulous Cambridgeshire-based sanctuary, where he will live out his life with another foxy friend called Jasper. It’s a perfect ending for a lucky little boy.

Fingers crossed they’ll be curled up and enjoying classic episodes of Basil Brush together in no time!