It does seem that the great lockdown of 2020 served as fuel for those creatives among us – certainly that’s how it was for Milton Keynes resident Dylan Jeavons, writes Sammy Jones.

D ylan has played his part in many successful local bands over the decades, a passion that began when he joined his first group aged just 13.

Dylan said: “I wrote my first song when I was 14 and strangely, that song is still being published in the USA! Over the years I’ve built up a library of self-penned songs, many of which I’ve had no outlet for. At the beginning of the first lockdown my work dried up and I was looking for something to fill my time. It occurred to me that it would be a good opportunity to re-record some of my old songs and possibly create an album, although I wasn’t sure it would progress that far at the time.”

But things did move on and Dylan pieced together the opus using a selection of newly penned numbers and some of those that has been hiding in his musical armoury for decades.

“My original intention was just to record old songs of mine that I thought deserved a second chance, and whilst a couple of these had made it on to vinyl back in the day, others hadn’t been heard by anyone ever!

“But as I got into the recording process I found that I was inspired to write new songs too – something which I hadn’t done for several years,” Dylan explained, “So the old songs in a strange way inspired the new. I knew it would be an odd compilation of songs, covering many different genres, so I wasn’t sure how it would be received. But the feedback has been very positive. I’m quite surprised actually,” he says modestly.

Armed with such a massive mixture of deliveries meant that Dylan didn’t need to think hard about a title for the work; MISHMASH summed everything up perfectly.

Like many a muso, Dylan is often found fiddling with bits of equipment, and in recent years has mastered the software necessary for home recording. After adding a new bit of hardware he was good to start the recording process at home.

Having a network of belting singers like Graham Dee and Nicky Prince among his friend list came in handy too: “While I could cover the instrumental side of things, and even lay down a vocal melody, I’m certainly no singer, so my ‘guide vocals’ would need to be replaced – this is where my talented friends came in. Once a song was completed, I’d email it to a vocalist friend, they’d record their vocals at home and send them back to me. I’d then swap them with my vocals on the original song and hey presto! I certainly couldn’t have done it without their help, or the technology!”

Of all the tracks on the album, Perfect Princess holds a particular poignancy for Dylan.

“I wrote it over 30 years ago about my daughter who wasn’t much older than a toddler at the time.

“Unbeknown to her she helped me through a very difficult time and, at one point, gave me a drawing she did of her watering flowers in a garden, surrounded by birds and love hearts pouring from the watering can. An incredible image that inspired the song Perfect Princess; ‘She feeds the flowers with love, and watches them grow’. Appropriately, the dawn chorus at the beginning of the song is recorded during that lockdown when nature seemed to take over.

“Whether it’s the best song on the album I’m not sure, but it means the most to me.”

All money generated from MISHMASH will be in aid of Emily’s Star.

“Katie, who conceived and runs Emily’s Star, is a family friend. The work they do is incredible and affects so many people so positively. I love Katie’s enthusiasm and commitment to the charity, all in the name of her daughter, Emily.

“She should be so proud of what she’s achieved and what she continues to do. In all my years I’ve never expected to make money as a musician, I’ve always done it for the love of it, so I thought if anyone was daft enough to buy this album, those pennies might as well go to a deserving cause like Emily’s Star.

“After all, I’d only spend it on motorbikes and beer!” 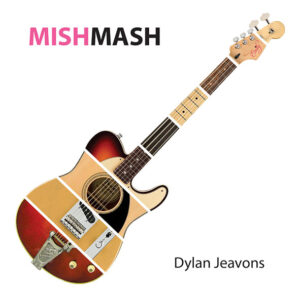 A MISHMASH of tracks:

4 Let Me Be (the jazz one) Featuring Graham Dee

5 Always Be (the indie one) Featuring Spencer Beaumont

8 Dreaming (the ambient one)

MISHMASH is available on all the usual streaming and download sites.