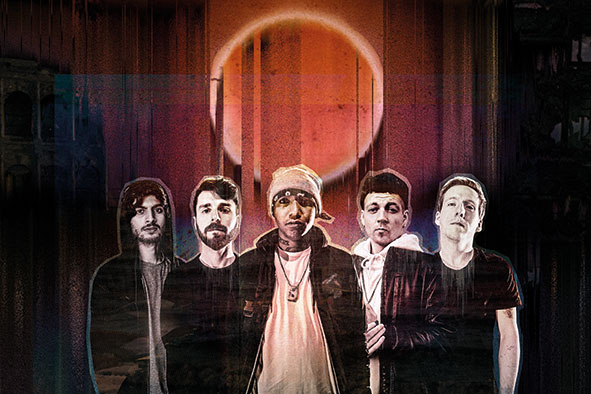 One of MKs most successful musical exports are back after an extended period of downtime.  Sammy Jones caught up with Hacktivist who are sounding more brutal than ever…

acktivist whipped up a storm when they unleashed their brutal debut album in 2016.

With its ferocious blend of grime and metal, Outside the Box saw all eyes – and ears – turn their way.

The band put themselves right in the mix, and took full advantage of the opportunities that came their way; they played the Warped tour in Europe, delivered the goods on festival billings including Download, Reading and Leeds and T in the Park, and went Down Under to show the Aussies a thing or two.

And they joined Korn on the road in Europe and accompanied Limp Bizkit in France.

Things were cooking for a while. And then? The band had to steer its way through a couple of line-up changes and issues.

And then covid obscured the view.

So here we are, in 2021, with a not-so-new line-up (original co-frontman Ben Marvin was replaced by Jot Maxi after the first album, and founding guitarist Timfy left the ranks, with James Hewitt taking over) a new buzz, and a new album waiting for release next month.

“We already had four or five tracks done when our old guitarist left, so we had to start afresh with James; we all had to get to know each other, work each other out and figure out a new way of writing,” co-vocalist J said, “But it was an easy process. Before, it was really just one person that did everything. Now we are reinvigorated and it is so much better. James is a great guy, and an excellent guitar player. It is perfect.”

J brings grime to the metal groove in the band – it’s the genre he was associated with in his youth, although these days he pays little heed to styles: “With me, music is just music,” he says, “I listen to everything; rock n roll, drum n bass – if I can bop my head to it, I like it,” says the fella who lists Pharell Williams as one of his idols.

“It was mostly hip hop and grime and jungle when I was growing up, but I’ve always crossed over and been a bit different like that.”

With the release date looming – Hyperdialect will be issued on June 18 – the band recently released the video for their new single, Planet Zero.

In its first week of release, the brutally bleak picture racked up more than 50,000 views on YouTube.

“It was absolutely crazy and I didn’t expect that,” J admitted, “I was really happy with it. We green screened it, and it was surprisingly quick to do. We slowed the song down and performed it in half speed before editing it in normal time to give it that sketchy, horror film look.”

The track and the accompanying visual is so heavy that one fan took to the keyboard to declare,

‘Actually gaining muscle while I’m listening to it,’ which raised a smile, but shows the potency of the new material.

Fans had been patiently waiting for the next instalment from the band (completed by guitarist Josh Gurner and drummer Rich Hawking) for a long time, and were thrilled by their return. J is just as keen to get the album in their hands: “For me, getting the album out will be a big weight off my shoulders…I have been waiting for so long.”

And, having been away for a significant amount of time, the band has plenty of pent-up energy to expel, and stuff to shout about.

“There are so many things wrong with the way humanity is,” says co-vocalist Jot Maxi, “We’re self-destructive and everybody knows it. It’s in a lot of films, especially in science-fiction. But that dark future is no longer fiction and it’s very clear we’re on a downwards path…”

And he says a change is nigh: “It’s becoming clear that we are on the brink of some type of revolution. Hacktivist are here to bring truth and positivity – the silver lining of a society clouded in poisonous fear.

“Hacktivist also represents a voice that isn’t afraid of saying what needs to be said. We’re already living in the future. We have the choice to either be shaped by it or to stand up and shape it ourselves. Which path will you take?”

Like musicians everywhere, the band are itching to get back out on the road. Festival slots are booked, with RADAR, Bloodstock and Slam Dunk in the mix and they are eyeing up European dates too.

Do you think these shows will be ‘normal’ if they happen?

“I can’t really imagine how it is going to be – hopefully things are normal by then,” J dares to dream, “I don’t mind wearing a mask to make people feel safe. Maybe there will be a mosh pit with everyone wearing masks too!

“I just really hope I can play a show, I am itching to play live. I just want for it all to ease, for venues to open and for people to have a good time again.”

About Emcees and rappers who talk like gangsters, stuff about shootings and stabbings, that type of thing. We’re against all of that.

It’s about being transparent and being real – and it’s quite a deep track.

My favourite track on the album. About being true to yourself and not just following fashion.

People can throw stuff at us and say things about us, but it won’t affect us – because we have an armoured core. We know that we are hard as hell!

An explanation of the fact that we are metal and grime combined.

A hard one – exploring how the world is run through money, and who has the most of it.

Our intelligence is hyper – it’s extra.

We are all dogs of war; we don’t want war, but get dragged into it. I am pretty cool with living my life and just chilling, and it’s not fair. The video has a lot of statements in it too.

It’s a skit in French – Jot is from France.

About the state of the planet and how people are ignoring the issues. It’s crumbling before our eyes and there is a lot more that we could all do about it.

How Dare You Exist

‘How dare we exist?’