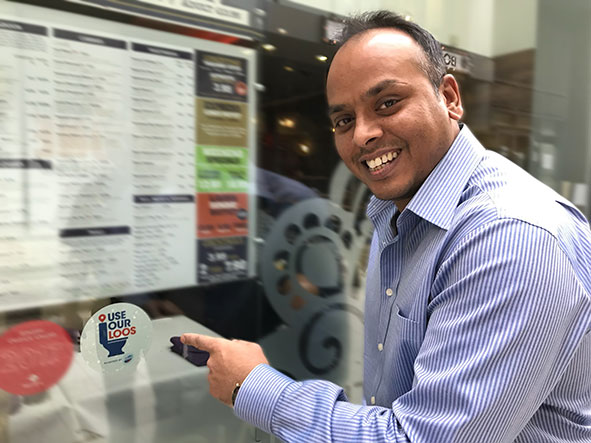 This month, a national campaign was launched by the British Toilet Association to ask restaurants, pubs, bars and local businesses to welcome the public to freely use their toilet facilities.

Milton Keynes has been named as one of a few places in the UK that doesn’t have a single free public toilet, making the need for local business participation even greater.

Maaya Indian Kitchen & Bar in The Hub has become the first business in Milton Keynes and one of the first in the UK to sign up to the campaign and display its sticker.

“We’re an independent business in central Milton Keynes and the community is at the heart of everything we do,” says Manager and Joint Owner, Mo Abdul. He added: “Going to the toilet is a human right and we have never refused anyone away for wanting to use our facilities, and now, thanks to this campaign, we can activity tell people outside that they are welcome in anytime.”

Over the past two decades the number of public toilets in the UK has slumped by more than a third (39%), according to responses to freedom of information requests, as local councils’ increasingly squeezed budgets lead to mass closures.

The total has fallen from 3,955 in 2000 to 2,414 this year, according to data submitted to the British Toilet Association (BTA) by 266 councils in England, Wales, Scotland and Northern Ireland.

In England alone, the average council runs only 15 public toilets, with each having to serve an average of more than 12,500 people.

The BTA’s new “Use Our Loos” campaign is urging businesses to make their toilets available to non-customers.

“We know councils are under immense pressure with their budgets and despite having no legal obligation to maintain these public facilities they have continued to try to halt the rapid rate of decline,” said Raymond Martin, director of the BTA. “Use our Loos is a community-oriented solution not about opening more public toilets but making more toilets public that already exist.”

Each participating outlet will be encouraged to have a sticker on display so the public can easily spot a business happy for people to use its toilets without necessarily being a customer. The scheme is similar to a model encouraging businesses to offer free water refills to non-customers. The Refill campaign aims to break the stigma around asking for water for free even if customers have not purchased anything else.

People can find their nearest toilet using this website: www.toiletmap.org.uk