Leslie Jeffrey was a colourful, creative character who was part of the fabric of Wolverton, the place he called home for his whole life. 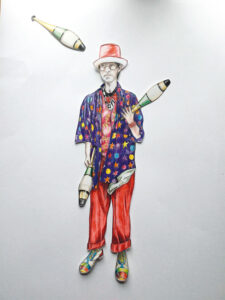 Leslie passed away in May, and artist and friend Shelly Wyndebank decided to pay perfect tribute – by placing paper cutouts of Les at various locations around the town.

The images began appearing in town at the start of July, and made quite an impact!

“I wanted to commemorate a dear friend and thought it would be great to share it on the streets of Wolverton,” Shelly told Total MK.

‘Les the Juggler’ was a circus performer, a teacher of circus skills, and an avid supporter of the arts and gigs. Despite being struck down by ill health at a young age, he put together the Circus Club and taught 100s of children at the Madcap Theatre.

Shelly first met Leslie two decades ago when he attended one of her exhibitions. A friendship quickly blossomed.

“A few days after he came to the show, he appeared again and had written a poem that encompassed all of my works in the show in one story. It was incredible. A beautiful and longstanding friendship was born. We’d often meet up for coffee and a chat and he would always try to make it to all of my shows.

“The thing with Leslie was that he always took the time to ask questions and listened to the answers – his memory for detail would astound me.

“Latterly, both he and I suffered poor health and then with the pandemic, along with everyone else, we became housebound, so we’d chat on the phone,” Shelly said.

What most amazed me about Leslie was, despite his obvious health and mobility issues he never once bemoaned his lot, despite suffering with Rheumatoid Arthritis he was a ‘cup half full’ kind of a man, and never let any of it hold him back.

“He just carried on regardless and packed as much as he could into his own life and joy into those lives around him.”

Shelly’s clever creations show Leslie in his younger years doing the thing that made him most happy – entertaining others.

“Wolverton will not be the same without seeing him in all his colourful finery, but there are so many who carry a little bit of the magic he shared with them over the years,” Shelly added, “This project has allowed me to share my love for a dear friend and will hopefully make people smile, the way he did, and take the time to stop for a while and share a story or two.

“Leslie would have liked that.”

> Have you seen one of the images? A life size image can be seen at the side of the Old Bath House Community Centre in Wolverton, but others are dotted around the town.

Two FB pages have been set up in memory of Les. Search ‘Les the Juggler’ and ‘Les Memories’.