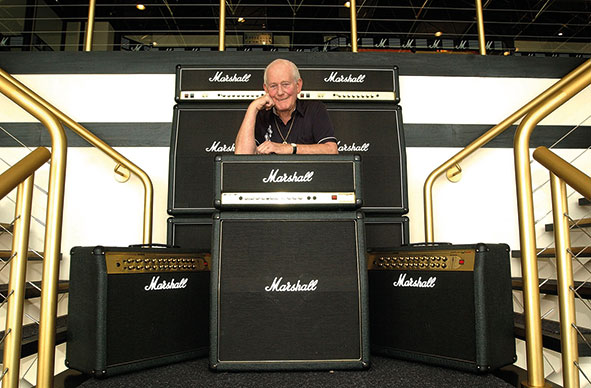 A new exhibition currently on display at Milton Keynes Museum is turning up the volume at the Wolverton-based history hub – by exploring the history of music in the new town.

Milton Keynes – Wired For Sound’ is a companion show to the book by the same name, from the pen of Pulse features writer Sammy Jones. 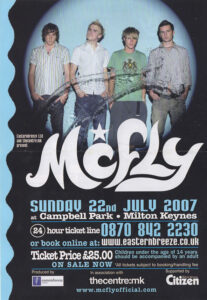 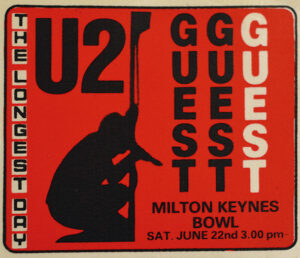 The collection of t-shirts, flyers, posters and various pieces of music memorabilia is a chance to step back in time and relive some of the greatest musical moments in the town’s history.

And there are more than you might think: “That was really the purpose of the book,” said Sammy, “There were so many great stories and anecdotes that needed to be recorded, and of course we’ve hosted some of the biggest artists from the world of rock and pop in MK too.

“I thought they needed to be put together in one place…the book was the first step and the exhibition is an extension of that.

“What struck me when putting the book together was the amount of artists that hold fond memories of Milton Keynes. It’s one thing for us to remember a special show, but for a band who might be touring venues for months on end to remember our town? That’s really special.”

‘Milton Keynes – Wired For Sound’ is a chance to relive the history of shows from The National Bowl; a venue which has brought the likes of David Bowie, Michael Jackson, Bruce Springsteen, Oasis and Black Sabbath to the MK stage.

Although it has been quiet for the past few years, The Bowl is a world-famous venue, and artists including Queen, The Prodigy and Status Quo chose to capture their performances here for release later on.

The show also gives a nod of respect to The Father of Loud, Jim Marshall, who was a real icon of music.

Thanks to his astute business sense and forward vision, the amplification brand that bears his name is the biggest and best in the world.

They are the equipment of choice for artists too numerous to mention, although some of them – Slash, Joe Perry and Zakk Wylde – pay tribute to Jim in the book.

“The contribution Jim made to the world of music is well known,” Sammy said, “But his generosity and support of local causes and charities is also without parallel. Jim gave his support to the smallest charity initiatives right through to helping fund the revamped Stables theatre, and he donated £1 million pounds to Macmillan Cancer Care and Willen Hospice.

‘It’s the best thing I can do, and I enjoy seeing people’s faces,’ Jim said, explaining that giving nature, ‘We came from a very poor family. We had hard times and I don’t forget my roots.’” 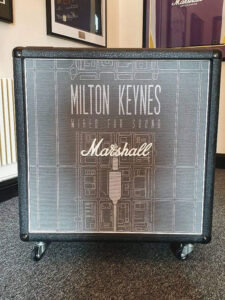 The exhibition also takes visitors through the hugely prolific career of jazz stars Sir John Dankworth and his wife, Dame Cleo Laine, with a wide array of images, albums and memorabilia telling their incredible story.

“They both enjoyed hugely successful international careers, but somehow found the time to launch a new venue too, and that was during the very early stages of Milton Keynes when music really didn’t have a home here. They gave the town The Stables back when it didn’t have a dedicated music venue and invested much of their money into the project to ensure its success. It’s one thing to set a venue up, but it’s another entirely to bank your savings on it!”

A history of Great Linford Manor also features, together with some of the award-winning and chart-bothering releases made there. Artists as varied as PiL, PJ Harvey, Skunk Anansie and Jamiroquai all spent time laying down albums at the manor during its years as a residential studio.

But ‘Milton Keynes – Wired For Sound’ shines a light on its local scene too; from the brass bands to the hard and heavy music makers who have stage-stepped in the town.

“It was impossible to accommodate every band, but Wired For Sound definitely captured the essence of the scene past and present,” Sammy promised, “It was important to journey back to the ‘early years’ and recall some of the brass bands and orchestras who used to command in the area before Milton Keynes was even a plan on paper!

“The Joe Lovesy Orchestra, the Bright Knights, The Ambassadors and The Rhythm Aces were popular names on the circuit, and are as much a part of the fabric of the area as the bands that are making their way now.

“In the 1920s and ’30s for example, Saturday night at the County Arms would have been spent listening to The Blue Bird Mouth Organ Band. Their shows upstairs at the venue proved to be very popular, although patrons trying to enjoy a quiet pint downstairs were less thrilled. One newspaper cutting recorded a disgruntled punter, who said, ‘It sounded like a herd of cattle moving around!’

“I loved unearthing little snippets like that,” Sammy said, “But if anyone has any other images or memorabilia from those times, please bring them to the exhibition – it’s so important to document all of our musical heritage.

“Researching the history of Wilton Hall was interesting. My grandmother worked there and used to share stories from the venues’ 1960s heyday when The Rolling Stones and Pink Floyd visited.

“But writing the book was also a chance to look at colourful characters like Screaming Lord Sutch, Nero and the Gladiators and Johnny Kidd and the Pirates who used to whip up a storm when they played here – for one show, Lord Sutch arrived on stage dressed in animal skin and wearing buffalo horns!

“And even even before that, the teenage fraternity were upsetting residents nearby, and the decision was taken to ban jiving at the hall because ‘it takes up room and leads to arguments.’ It seems rather tame compared to what we are used to now, but back in the late 1950s, it was quite the controversy!

Of course, local bands from more recent times made their mark too, and the exhibition will give a nod to artists including The Fenders, Unit 6, The Blues Collective, Ablemesh, Capdown, Phema, Graveltrap and many others.

“We have pieces from artists including Stray, The Transistors and Solstice, and so many other local artists – I’ve picked my way through 100s of old demos and rediscovered so many it would take too long to name them!

Dance fans will be able to reconnect with times spent well at The Sanctuary and Ultra Vegas.

Vegas’ visionary Marc Carter has raided the archive and shared some real gems for the exhibition, with props, videos and music.

“Hopefully, the many flyers and photos will allow music fans that were around the first time to rekindle some brilliant memories, and those who were too young to attend can explore our rich history for the first time,” Sammy added.

Visitors to the exhibition are also invited to share details of their favourite Milton Keynes gig for a future project: Perhaps you were one of those who still remember seeing The Stones or Black Sabbath in Bletchley. Maybe you were in the crowd when Take That came to Bletchley Rollers, or Queen played at The Bowl. Or was it one of those fondly remembered Campbell Park festivals that conjures up great memories? Do you remember an unknown Amy Winehouse at The Stables, or was it a local band that gave you a night to remember? Fill in a postcard and help that memory live on forever.

“Milton Keynes is known as a forward thinking town and as a town for big business, but it knows how to rock ‘n’ roll too – and this show proves it!”

The exhibition will also open 4.30pm – 8.30pm every Thursday during September – parking will be available in the new car park off Miller’s Way.

Copies of ‘Milton Keynes – Wired For Sound’ will be available to purchase.