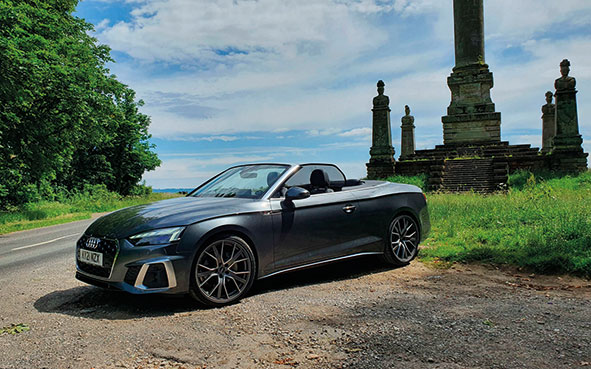 Like many, the thought of trying to arrange foreign travel right now seems far more effort than it’s worth. Plus, there are so many incredible places in our own country to explore, to that extent, I always try and get away once in the UK every year. This time I was heading to York at the end of June via Lincolnshire, so what better way to travel than in a convertible.

There are few drop-tops on the market right now, as with fast hatchbacks, that class of car seems to go through fits and starts. It needed to be something stylish, semi-sporty and a good long-distance cruiser. Audi’s A5 ticked all those boxes. 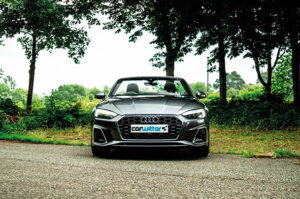 Prices start at £43,000, but this model in range-topping ‘Vorsprung’ trim is a heady £56k; it does come with nearly every option ticked though.

Now that’s a lot of money for a car with a 2.0-litre turbocharged petrol engine and just 201 BHP. But the 0-62 is still a respectable 7.5 seconds, and the A5 truly comes alive when you switch the auto ‘box into Sport.

Yes, it’s a big car, but the Audi felt incredibly at home along the winding country lanes through the Lincolnshire Wolds. Roof down, warm yet overcast, there was no better place to be to soak up mile after mile of the mini road trip.

That gorgeous merlot coloured roof folds away in just 15 seconds, and you can do so at speeds of 31 MPH. It does so in near silence and must look like a work of art from the outside as the rear deck lifts while the fabric concertinas perfectly into the boot.

The most surprising thing about the A5 Cabrio was just how much luggage room there was. With the roof up, it’s genuinely cavernous, more than enough space for a couple of large overnight bags and all the other paraphernalia that goes with a week away. 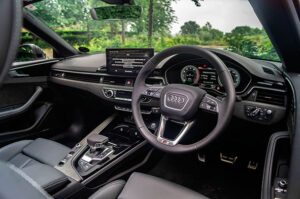 You won’t want to load it too full though, as there’s a fold-down box section to store the roof in. If this can’t flap down, there’s no topless driving to be had. A handy little switch in the boot manually lowers this box so you can pack everything around it and still be able to lower the roof.

Inside is top draw when it comes to quality, as you’d expect from an Audi of this price. However, the ash effect wood might not be to everyone’s taste, and as with so many cars these days, the large touchscreen looks rather ‘stuck on’ sprouting from the dash.

You get virtual cockpit plus, a fully customisable LCD screen for the dials, and the navigation system is incredibly easy to use. One of the best features though has to be the adaptive cruise control with Stop&Go. Switch the cruise on to your desired speed, and it will drive the car for you, braking for upcoming corners, accelerating back out of them again, slowing at junctions before accelerating off. Truly incredible tech that made many of the 550 miles driven over the course of a week even easier.

In terms of MPG, the A5 was bang on the claimed WLTP figure of 38 MPG, which isn’t bad considering its size and heft.

If you’re in the market for a convertible that has those long legs to be a grand tourer with luggage space to match, look no further than the Audi A5 Cabriolet – it was the perfect companion for a summer staycation.