Music might have been off the menu at venues for the most part in 2020, but that doesn’t mean that band creativity has ceased. If anything, enforced lockdowns, venue closures and all the associated (often nonsensical) hassles have provided musicians with more time to let their musical juices flow.

Now, thanks to The Craufurd Arms in Milton Keynes you can hear some of the most exciting artists from these parts on a new compilation CD. It’s the perfect stocking filler for music fans this Christmas. Sammy Jones listened in…

T his new showcase disc has pulled together 16 bands from Milton Keynes, Northampton and Bedford all offering the listener ear-candy; from the indie to the avant-garde and the hard and heavy jostle for space on the release, which delivers just under an hour of new sounds.

Leading lights on the MK scene Our Man in the Bronze Age feature with Out of the Beginning. The track’s origins date back several years, but it had sat unloved until the band’s recent studio sessions. Its rediscovery has resulted in a new ace in their pack of plenty.

“We decided to revisit it when we began working on the new album as the vibe of it fitted in perfectly with our newer songs,” bassist Andi Jackson told us, “It’s a loose homage to the great Peter Gabriel and his musical journey through life.”

Atmospheric experimental indie players So So Sun (SSS) have contributed Paradise to the tracklisting.

It was written when SSS was a two-part affair comprising Chris Davy and Niall Thomas, but they’ve since expanded their line-up.

“We love the drum groove and now that we play shows as a five-piece it always sounds pretty epic,” Chris promises, “It’s also nice to get our violin player Davina on the keys and mix things up a bit visually, plus she’s amazing. We spent absolutely ages on the lyrics of this tune, and both wrote different sections, piecing together our own interpretations of our initial theme.”

Rising noise-bringers Torus have contributed Make You Mine.

Frontman Alfie Glass said: “I’ve been playing the Craufurd for as long as I can remember. It’s like a home to me so I’m glad to be a part of it. I hope this will achieve a sense of community and make everyone realise how many good artists there are locally! The Craufurd is a very special venue.”

Garage punk proposition The Comms are among the Northampton talents onboard.

“We wanted to be involved as The Craufurd Arms has meant a lot to us, both as a place to see live music and a place to play it,” said guitarist Oli Romens, “We’ve found the venue to be consistently excellent at what it does, putting on amazing bands and treating all the acts who do play the venue with great respect and consideration, and the people that work there are awesome and supportive.”

“Toxic relationships are something a person never intends to get themselves into out of choice,” singer and guitarist Liam Taylor added, explaining the story behind their track Pulled Apart, “It was written in the eyes of a third person witnessing a friend having to deal with an unhealthy relationship with their partner.”

Fast-risers Sarpa Salpa decided to share Paralysed from their debut EP release: “It’s one that we traditionally don’t play live that often, but it’s a bit of a fan favourite so we’ve decided to bring it back into the set,” said synth-er Meg Amirghiasvand who joined the ranks in 2019.

The danceable indie purveyors bring a dollop of feel-good with their deliveries – the perfect antidote to these trying times. After having their planned summer schedule cancelled, the band made a return to the stage with a ‘covid safe’ performance at the venue in October.

“We were a bit unsure what the vibe would be like with everyone needing to be seated and socially distanced from one another, but as soon as we got going it just felt amazing to be playing live again,” Meg said, “The crowd still gave us a lot of energy and seemed to enjoy the experience too, so we were really pleased. It was definitely different, but so much better than we expected.”

“The Craufurd Arms has been an invaluable space for musical experimentation throughout the early stages of my artistic development,” he said, “My fondest memories of playing live music in my mid-teens are on stage at the Craufurd Arms.” 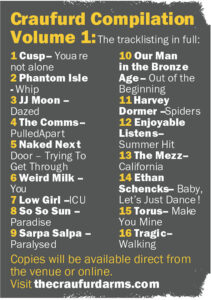 Paul Rivers is events manager at The Craufurd Arms and responsible for compiling this snapshot in time.

Paul is thrilled with the selection and hopes the release of the CD will provide a bigger platform for some of the leading lights in music in and around Milton Keynes and Northampton.

“We want to help those bands and acts who have played here over the past couple of years to reach new fans. This project is a continuation of our commitment to keep supporting and nurturing the truly awesome original acts that have blown us away.

“If anything, the pandemic has just made us more determined,” he added, “The bands we’ve featured are just too good not to shout loudly about.”

‘MyCinema’ is back to bring Christmas Movie Magic

The Henry Allen Trust – Carols In The Car