The music industry has been crushed under the weight of the pandemic. It’s down right now, but it’s definitely not out. Sammy Jones looked at the history of the Roadmender, and spoke with those steering the musical ship through the current choppy waters.

If it wasn’t for the pandemic just now, a casual observer looking towards 1 Lady’s Lane on an average evening could expect to see a stream of hot and sweaty bodies leaving the building, buzzing from the sheer delight that only comes from connecting with live music.

The Northampton venue has been renowned for delivering the best of live shows for decades. It is a real beacon in the region for gig-goers. But when the Roadmender began life it had nothing to do with music – and it wasn’t even based on the same site. Originally operational as a youth club in the town, by the late 1930s the Roadmender boasted a membership of close to 400 youngsters, and its home was at Far Cotton. It was decidedly no thrills too, with orange boxes doubling as seats for the attendees!

The venue now known and loved by generations of music fans had opened its doors in 1940; despite it being wartime, the value of the youth club was appreciated, funds were found to support it and Earl Spencer was the President of the Northampton arm of the national movement. As the decades came and went, The Roadmender moulded to the needs of the town it served; operating not only as a youth club, but also as a community hall – and it packed a punch as a boxing venue. 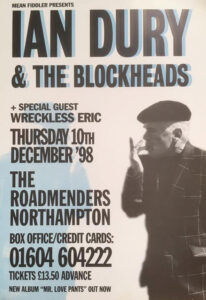 By the 1980s it was the focal point for young people seeking work; with youth workers offering various courses and helping connect people with jobs. Live music also came into the picture, but it was far from plain sailing and under-funding in the mid-1980s gave way to a lengthy period of difficulty before the doors were closed on the venue at the start of 1991.

Not that the music would be silenced for long; a year later and all eyes were on the stage once more – not least because The Who’s Roger Daltrey and Jools Holland led the celebrations at the relaunch. The 1990s were a particularly fruitful time for music, and hard work by the promoters saw a constant stream of awesome artists stopping off at the venue as part of the tour itinerary.

There were just so many bright moments, and all listed on those coloured slimline flyers that became a must-grab each month, so that you could plot your shows out. Certainly that’s what we did.

In 1994, the stage was occupied by artists including Manic Street Preachers, Primal Scream, Killing Joke, John Martyn and Northern ‘erberts The Macc Lads. Watching American rock giants Tool take on the Roadmender stage on a Wednesday night that same year was immense. The show came the year after their debut album Undertow was issued, and tickets cost just £6.50. These days the booking fee alone costs that!

A year later and Faith No More played before a sell-out crowd. Tickets for that March date were £10, but it was another rammed ‘What’s On’ guide for the month, with Sleeper, Stiff Little Fingers, and Gene all showing out. Or perhaps you were among those who checked in with Radiohead or Moby, which cost a not-so-substantial £7 and £6 in advance.

When The Jim Rose Circus came to the Roadmender, the modern take on a circus sideshow was a hot-ticket; everyone wanted to see people eating broken glass, hanging heavy weights from body piercings in the nether regions, and clever contortionists bending themselves in ways that boggle the mind.

The chainsaw juggling was quite the thing too. But when the lights of the venue were switched off, the exits blocked, and the ‘saw handler began running among the audience?

It was surely the cause of some soiled underwear among the crowd that night. The aroma of the petrol, the buzz of the chainsaw, and the screams and frantic pushing of the audience as they tried to evade this instant horror movie gave an adrenalin rush and a half.

A couple of days later and a pre-disgraced Rolf Harris appeared at the venue. Rock fans were well catered for during the 1990s and noughties; Stand-out shows? There were so many; Extreme metallers Carcass, alt-metallers Life of Agony, Jesus Lizard, Paw, Dog Eat Dog and Headswim all did good things in the old bar area, while in the main auditorium we were lucky enough to see the late, great Ian Dury with The Blockheads, and another incredible artist who is no longer with us, Arthur Lee with Love.

The Black Crowes and Monster Magnet were among the many other memorable nights out. In more recent years we’ve been among the throng for shows by Biffy Clyro, PiL and Therapy?

But that was then. In the past year, like venues across the land, the Roadmender has stood silent. Natalie Norris-Lee and her husband Dave Norris co-own the venue. And let’s be honest, times have been tough.

“But generosity from our followers with our Crowdfunder campaign, supporting our merchandise with sales and the kindness of well-wishers has definitely helped us through,” Natalie told Pulse, “Bounce back loans and grants have also ensured there will be a venue to come back to.”

Although the stage is empty, the dressing rooms tidy and the power switched to ‘off’ Natalie and Dave still have lots to do – the continuing uncertainty about when venues can reopen does cause an issue when you are in the business of booking bands.

“At the moment we are constantly rescheduling shows and tours,” she said, “Back in March last year, we never thought we would be moving events to 2022…the whole industry is in limbo; unsure when to start announcing new tours again. We now have the fear of announcing, and then having to reschedule tours.”

But music isn’t just a pastime. For many of us it’s what we do, and who we are. And the pandemic isn’t about to change that.

Natalie added: “We feel very positive about the future of live music, and believe that when the industry is able to get going safely again, people will still have the desire to go out…and we’ll be there for them,” she promised.

You can support the venue by buying merchandise direct from the Roadmender – they have a great selection of unique t-shirts, hoodies and tote bags.

You might not be able to visit for a show just now, but you can still wear your support.