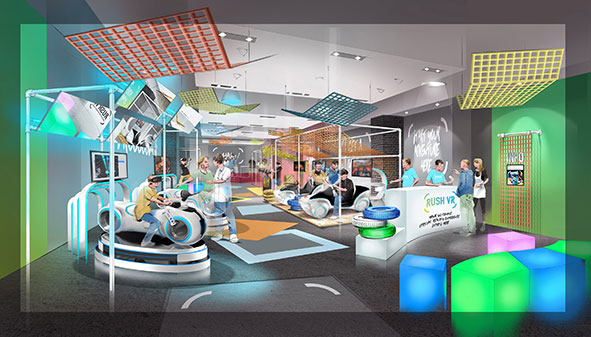 Landsec’s leisure destination Xscape Milton Keynes has announced that they are due to open two new stores later this month, adding to their great mix of leisure, dining and retail offers.

First up will be ‘Cocina’, which will provide a completely new style of Mexican dining experience for Milton Keynes offering a modern take on classic Mexican favourites such as tacos and nachos. Cocina is the big sister of the established quick-service chain El Mexicana, but rather than grabbing a burrito on the run, at Cocina you can relax in their impressive surroundings, enjoy cocktails with friends and savour the taste of a true Mexican feast.

Guests are actively encouraged to mix up their dishes and customize them with extra sauce or spice just as they want it – and the new store is promising great value for visitors, by enjoying a meal for two with drinks coming in at less than £25.

Up next, Virtual Reality concept brand ‘Rush VR’ has chosen Xscape Milton Keynes to be home to their first immersive entertainment centre in the UK and will also be opening their doors in March. It promises to unlock a completely new world to its customers.  The centre will boast five VR cubes offering customers different experiences like the chance to fight zombies or race in their two motion simulation racing chairs, which when used with VR headsets become the closest thing to actually being on the race track. Future developments also include a VR maze and a two-person rollercoaster ride experience.

During the Easter holidays look out for Rush VR in the main mall at Xscape MK as they offer customers a taster of what they can expect to experience.

General Manager at Xscape MK, Carl Meale, commented: “It’s great to be able to announce these new openings before the Easter holidays. We can’t wait to try the Mexican food at Cocina and get our adrenalin boost at Rush VR – two fantastic new experiences for Milton Keynes and it’s only the beginning, as we plan to welcome more new brands for our guests to experience throughout 2018.”